The Hydra-Matic 6L90 (production code MYD) is a six-speed automatic transmission produced by General Motors for use in rear- and rear-biased all-wheel-drive vehicles with a longitudinal powertrain orientation. Developed in-house by General Motors, the Hydra-Matic 6L90 is part of the 6LXX family of fuel-saving, electronically controlled six-speed automatic transmissions that succeeded the 5LXX family.

The modular design of the Hydra-Matic 6L90 (MYD) is shared with variants rated for different torque levels to accommodate various engines and vehicle applications. All versions share a unique output gearset configuration that enables it a wider range of ratios than a conventional planetary gearset automatic transmission. This allows the transmission to be tailored for optimal fuel economy while delivering excellent acceleration traits.

The modular concept of the Hydra-Matic 6L80 centers on the desire for common components and manufacturing tooling for four different size variants of the six-speed family. All versions use three gearsets: a simple input planetary gearset and two output gearsets, one of which is a compound gearset with three pairs of two pinion gears on the output carrier, one pair meshing with the sun gear and the other with the ring gear.

Advances in transmission control modules allow them to exist reliably inside the transmission, where temperatures remain fairly constant compared to a body-mounted module. The transmission and module are assembled together, so no additional steps are necessary during vehicle assembly.

The 6L90 is a heavy-duty version of the 6L80 six-speed automatic, with a strengthened input gearset that has two additional pinion gears (six in total) and a strengthened output gearset that uses wider gears than the 6L80. Its flexibility extends to the clutches, where the 6L90 has one more clutch plate in each clutch than the 6L80 for heavy-duty applications. There is also a 6L90 version without the additional clutch plate to more closely match application requirements, where appropriate.

The 6L90 shares about 75 percent of the parts as the 6L80, although the case of the 6L90 is 35 mm longer than the 6L80 case. The 6L90’s case also accommodates additional fasteners between the transmission and the transfer case for improved driveline noise/vibration performance. 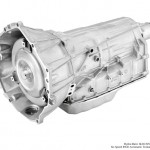