The Hydra-Matic 6T40 (production code MNH) is a six-speed automatic transmission produced by General Motors for use in front-wheel-drive vehicles with a transverse powertrain orientation. Developed in-house by General Motors, the Hydra-Matic 6T40 is part of the 6TXX family of transmissions that succeeded the 5TXX family. The 6T40 is a more robust version of GM’s 6T30 gearbox.

Six-speed automatic transmissions are integral in GM’s initiative to offer vehicles with excellent fuel economy and the Hydra-Matic 6T40 transmission is essential to delivering on that promise.

Designed for FWD and AWD applications, the GF-6 family of transmissions are technologically advanced, fuel-saving six-speed automatics. Shared traits between the versions – and other Hydra-Matic six-speeds – are reductions in complexity, size and mass, including clutch-to-clutch operation that enables the six-speed to be packaged into approximately the same space of a four-speed automatic. The transmissions also share an overall 6.11:1 gear ratio spread, which contributes to their signature balance of performance and fuel economy.

Adaptive shift controls include automatic grade braking, which commands the transmission to remain in a lower gear if the vehicle is decelerating or coasting on a downgrade. This takes advantage of engine braking to prevent unwanted acceleration. This reduces the need for the driver to brake during a hill descent. The control module receives input that monitors brake pedal usage, vehicle acceleration rate, throttle position, and even whether a trailer is connected to the vehicle.

The line pressure P-R valve has been changed to have a lower offset pressure, moving the operating pressures into the more accurate range of VFS control. The diode one way clutch has been updated to have an aluminum pocket plate with spin loss reducing scallops and lower rotating inertia and mass. Oil level setting procedures remain unchanged.

For the lubrication system, a lube bypass valve has been added to the pump assembly. This valve remains closed until Line pressure is approximately 600 kPa. Below this pressure, lube flow passes through one orifice, above this pressure, lube flow passes through 2 orifices in parallel. With the valve closed, less oil is consumed, resulting in lower power losses.

Instead of “folding” the transmission around the end of a transversely mounted engine, which has been one of the dominant GM transaxle design conventions, the 6T40 contains all of the gearing in line with the crankshaft centerline of the engine. The advantages of this layout can translate to a shorter overall vehicle length, more interior room and lower powertrain height.

The torque converter in the 6T40 uses a single-plate lock-up clutch and features a “hyper-elliptical” oval cross-section shape. This design reduces the thickness of the torque converter, reducing the space it needs and keeping the overall width of the engine and transmission as narrow as possible, for packaging advantages. The single-plate lock-up clutch uses GM’s electronically controlled capacity clutch (ECCC) technology to help dampen engine vibrations and ensure smooth operation.

To minimize gear noise, as well as vibration, the transmissions’ helical gears are ground and honed to ensure exact dimensions and tolerances. With closer tolerances, the gears are less prone to characteristic whining or humming, and the transmissions operate with exceptional quietness.

The TCM is mounted inside the transmission, where temperatures remain mostly constant compared to an external-mounted module. It is small in size, which helps minimize the overall size of the transmission. The transmission and module are assembled together, so no additional connections are necessary during vehicle assembly.

The transmission electronic hydraulic control module (TEHCM – pronounced “TECH-im” by the engineers) of the 6T40/6T45 contains basic software and algorithms shared among all Hydra-Matic six-speed variants, including RWD, FWD and AWD. The module is located inside the transmission, which reduces manufacturing complexity, and requires only vehicle-specification calibration to the core program. The TECHM also enables features such manual shift control and grade logic. 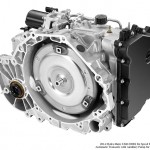