The Hydra-Matic 6T80 (production code MHM) is a six-speed automatic transmission produced by General Motors for use in front-wheel-drive vehicles with a transverse powertrain orientation. Developed in-house by General Motors, the Hydra-Matic 6T80 is part of the 6TXX family of transmissions that succeeded the 5TXX family. The 6T80 is the most capable and robust transmission of the 6TXX series, including the GM’s 6T75, 6T70, 6T50, 6T45, 6T40, and 6T30 gearboxes.

The Hydra-Matic 6T80 (MHM) is part of GM’s family of technically advanced, fuel-saving six-speed automatics designed to optimize efficiency while delivering exceptional smoothness and performance. This high-capacity version is used exclusively with the Cadillac XTS Twin-Turbo, which is rated at 410 horsepower (306 kW) and 369 lb.-ft. of torque (500 Nm).

A wide overall ratio spread of 6.04:1 allows a steep first gear, as well as a “tall” overdrive top gear for low-rpm highway cruising. Acceleration and fuel economy are maximized, while engine noise is reduced during cruising. Because of the wide ratio spread, first gear is a very high ratio, which provides brisk acceleration from a stop. Sixth, however, is an overdrive ratio, which keeps the engine revolutions as low as possible for highway cruising, reducing engine friction losses and improving fuel economy.

Instead of “folding” the transmission around the end of a transversely mounted engine, the 6T80 contains all of the gearing in line with the crankshaft centerline of the engine. This translates to a shorter overall vehicle length, more interior room and lower powertrain height.

Gears change from second to sixth gear ratios with a precise clutch-to-clutch action, where the clutch is engaged in one gear at exactly the same time it is released in another. The first-to-second upshift is a freewheeling action, where the second gear clutch engages while the first gear one-way clutch spins freely. This allows a greater degree of smoothness at lower vehicle speeds.

Adaptive shift controls include automatic grade braking, which commands the transmission to remain in a lower gear if the vehicle is decelerating or coasting on a downgrade. This takes advantage of engine braking to prevent unwanted acceleration and reduces the need to brake during a hill descent. The control module receives input that monitors brake pedal usage, vehicle acceleration, throttle position, and whether a trailer is connected to the vehicle.

The 246 mm torque converter in the 6T80 uses a 258-mm single-plate lock-up clutch and features a “hyper-elliptical” oval cross-section shape. This reduces the thickness of the torque converter, reducing the space it needs and keeping the overall width of the engine and transmission as narrow as possible, for packaging advantages. The single-plate lock-up clutch uses GM’s electronically controlled capacity clutch (ECCC) technology to help dampen engine vibrations and ensure smooth operation.

A chain-driven, off-axis fluid pump provides hydraulic pressure for the shift events and lubrication. The pump features vanes that can vary its output, optimizing the amount of energy the pump needs to operate.

To minimize gear noise as well as vibration, the transmissions’ helical gears are ground and honed to ensure exact dimensions and tolerances. With closer tolerances, the gears are less prone to characteristic whining or humming, and the transmissions operate with exceptional quietness.

The 6T80 is filled for life with DEXRON®-VI premium fluid, which does not require changing under normal use. It was developed for a more consistent viscosity profile, a consistent shift performance in extreme conditions and less degradation over time. 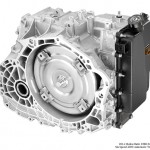