The Hydra-Matic 6T50 (production code MHK) is a six-speed automatic transmission produced by General Motors for use in front-wheel-drive vehicles with a transverse powertrain orientation. Developed in-house by General Motors, the Hydra-Matic 6T50 is part of the 6TXX family of transmissions that succeeded the 5TXX family. The 6T50 is more capable and robust than GM’s 6T45, 6T40, and 6T30 gearboxes.

Six-speed automatic transmissions are integral in GM’s initiative to offer vehicles with excellent fuel economy and the Hydra-Matic 6T50 delivers on that promise. Designed for FWD and AWD applications, the 6T50 is part of GM’s family of technologically advanced, fuel-saving six-speed automatics. Shared features between the versions – and other Hydra-Matic six-speeds – reduce complexity, size and mass. Clutch-to-clutch operation enables the six-speed to be packaged into approximately the same space of a four-speed automatic.

Because of the wide ratio spread, first gear is a very high ratio, which provides brisk acceleration from a stop. Sixth gear is an overdrive ratio which lowers engine revolutions for quiet highway cruising, reducing engine friction losses and optimizing fuel economy.

Instead of “folding” the transmission around the end of a transversely mounted engine, which has been one of the dominant GM transaxle design conventions, the 6T50 contains all of the gearing on the engine crankshaft centerline. The advantages of this layout enables a shorter overall vehicle length, more interior room and lower powertrain height.

Three planetary gearsets are used with three stationary clutches and two rotating clutches, which save space compared to freewheeling designs. Freewheeling mechanisms allow accurate timing between shifts, but also take up more space and add more components to the transmission. Through electronic controls, the clutch-to-clutch concept of the 6T50 delivers optimal shift timing.

The torque converter in the 6T50 uses a single-plate lock-up clutch and features a “hyper-elliptical” oval cross-section shape. This design reduces the thickness of the torque converter, reducing the space it needs and keeping the overall width of the engine and transmission as narrow as possible for packaging advantages. The single-plate converter clutch uses GM’s electronically controlled capacity clutch (ECCC) technology to help reduce engine vibrations and ensure smooth operation. 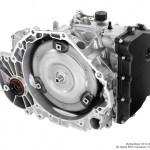