Specifically, the 6T40 MHH eAssist is a special variant of the 6T40 gearbox modified to use electrification; it is sometimes known referred to as MHH-6T40 with Auxiliary Pump.

An auxiliary, electric oil pump is added to the 6T40 to keep the transmission launch clutch primed when the engine shuts off at a stop. That keeps the transmission ready to perform when the driver accelerates for a seamless, uncompromised driving experience.

Instead of “folding” the transmission around the end of a transversely mounted engine, which has been one of the dominant GM transaxle design conventions, the 6T40 contains all of the gearing on the engine crankshaft centerline. The advantages of this layout enables a shorter overall vehicle length, more interior room and lower powertrain height.

The torque converter in the 6T40 uses a single-plate lock-up clutch and features a “hyper-elliptical” oval cross-section shape. This design reduces the thickness of the torque converter, reducing the space it needs and keeping the overall width of the engine and transmission as narrow as possible for packaging advantages. The single-plate converter clutch uses GM’s electronically controlled capacity clutch (ECCC) technology to help reduce engine vibrations and ensure smooth operation. 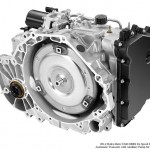