The Hydra-Matic 8L45 (production code M5N) is a fuel-saving and electronically controlled eight-speed automatic transmission developed and produced by General Motors for use in rear- and rear-biased all-wheel-drive vehicles with a longitudinal powertrain orientation. Used in sports and luxury cars, the Hydra-Matic 8L45 is part of the 8LXX family of transmissions that succeeded the 6LXX family.

Designed and built by GM, the 8L45 transmission speed is expected to contribute up to 5-percent greater efficiency, when compared to the previous Hydra-Matic 6L45 and 6L50 six-speed automatic transmissions. Smaller steps between gears compared to the 6L45/6L50 six-speed automatics enable a wide 7.0 ratio spread and keep the engine within the sweet spot of the rpm band, making the most of its horsepower and torque to optimize performance and efficiency.

Like its more potent 8L90 variant, the 8L45 occupies the same space as GM’s previous 6L45 and 6L50 six-speeds while weighing less. Compared to the 8L90, the 8L45 is smaller and lighter while having the same grouping of four gearsets and five clutches. The 8L45 also incorporates special components necessary for engines with start/stop technology.

One of the major changes of the 8L45 compared to the 8L90 is the gear ratios. With a wide 7.0 overall gear ratio and numerically higher 4.62 first gear, the 8L45 will help drivers “start off more confidently, with a greater feeling of immediate performance.” The gear ratios and smaller steps between gears also result in a 5 percent fuel economy benefit over a six-speed automatic.

For performance driving, the transmission offers full manual control via steering wheel paddles, and unique algorithms to deliver notable shift performance with the smoothness and refinement that comes with a conventional automatic fitted with a torque converter.

Featuring four gearsets and five clutches, creative packaging enables the 8L45 to fit the same space as the previous 6L45/6L50 family of six-speed automatics. Being less capable than the 8L90 also enables the 8L45 to be 33 pounds (15 kg) lighter. Along with design features that reduce friction, the 8L45 is expected to contribute up to 5-percent greater efficiency, when compared with a six-speed automatic.

Five clutches are used, three at a time, leaving only two open clutches in each gear state. Optimized clutch sizing and off axis binary pump contribute to outstanding spinloss attributes.

All applications feature adaptive shift controls. Several features such as grade braking, Performance Algorithm Shifting, and Driver Shift Control are available on some of the applications. Performance Algorithm Shifting (PAS) monitors how assertively the driver is using engine output and other vehicle sensors to determine at what engine speed to upshift of downshift. Driver Shift Control allows the driver to shift the transmission like a clutchless manual gearbox. Electronic safeguards prevent over-revving if the wrong gear position is selected.

The 8L45’s controller analyzes and executes commands,the processor microcontroller executes instruction at a rate of 120 Million Instructions per second, and wide-open-throttle upshifts are executed up to eight-hundredths of a second quicker than those of the dual-clutch transmission offered in the Porsche 911.

The torque converter is 258 mm in diameter and features a lock-up clutch, although clutch and converter specifications vary depending on the application. The 8L45 uses electronic controlled capacity clutch (ECCC) technology, which employs a small, regulated amount of slip to dampen out engine pulses for a smoother running drivetrain, especially during shifting.

The 8L45 uses Dex 6 HP Transmission fluid, which was developed to have a more consistent viscosity profile as well as improved lubrication characteristics. 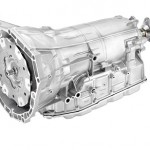