Replacing two prior GM platforms, the GEM architecture made its debut on the 2018 Buick Excelle Sedan.

The GEM initiative is based on the strategy of developing low-cost, entry-level vehicles for emerging/developing markets on one common platform.

In July 2015, General Motors announced that it will invest $5 billion into a new Chevrolet vehicle family for developing markets. At the time, the undertaking was internally known as Project Amber. At some point in 2016, it was been renamed to GEM.

In its July 2015 announcement, GM stated that the purpose of the new emerging markets platform is to enhance the competitiveness of its mainstream Chevrolet brand in the world’s primary emerging markets, including China, India, Brazil and Mexico. However, we have since learned that the GEM platform will also be used to underpin some Buick vehicles in the Chinese market.

It is understood that the undertaking, initially called Project Amber, had three primary objectives:

The result is that the GEM platform will serve as the basis of the many Chevrolet vehicles for the GM International (GMI) division (comprised of Latin America, China and Southeast Asia), as well as some vehicles for GM China.

In doing so, GEM will replace the GM Gamma platform for vehicles in developing markets, the China-local GM-PATAC K platform, along with various vehicle-specific “one-off” platforms.

In its announcement, General Motors stated that it will invest $5 billion in the new global emerging markets platform.

The reason for investing such a large sum in a platform for developing market vehicles is simple: General Motors projects that between 2015 and 2030, growth in emerging markets will outpace expansion in the world’s mature economies. Meanwhile, buyers in these emerging markets will come to expect higher levels of technology, safety and efficiency than currently is available in affordable vehicles typical to these regions.

GM will be able to meet the high content levels of these new models by consolidating several disparate architectures currently used for vehicles in developing markets today into a single platform and engine family. Savings will be derived from the larger sourcing and manufacturing scale.

Though the vehicles will all be derived from the same new platform, specific models for various regions and countries will be tailored to suit the market’s prevailing customer preferences or regulatory requirements.

The engineering contract for the GEM platform as well as for all car lines for all emerging markets is believed to have been awarded to PATAC – the Pan Asia Technical Center, a joint venture between GM and SAIC.

An insider has described the engineering process behind the GEM platform as follows: Chinese management from PATAC sends Chinese engineers, designers, homologation experts, supply chain/sourcing experts, and other employees to markets where GEM-based vehicles will be sold in order to explore and understand the various differences and conditions in those non-Chinese markets.

They will learn how to address and solve different homologation, safety and design requirements for each market where GEM-based vehicles will be sold. In the process, they will also acquire knowledge and skills associated with engineering a global platform, while also selecting and managing suppliers.

GM President Dan Ammann did not share specifics about how the new GEM plan will affect the company’s manufacturing footprint in the emerging markets, but did say to not expect the consolidation of vehicle architectures to equate to a reduction of existing manufacturing capacity in the affected regions.

“The fundamental story here is a story of growth,” he said. The 2 million vehicles planned to eventually be built from the new platform exceeds the current number of vehicles GM currently sells from a variety of platforms, he added.

Since the GEM platform is positioned as an emerging country platform developed predominantly by a Chinese engineering arm, it is highly likely that parts sourcing will be lead and managed by PATAC. As such, vehicles riding on the GEM platform will likely contain a high amount of Chinese suppliers.

The volume for the vehicles on the GM GEM platform is roughly 2.2 million per year, mostly in the B and C segments. Of that, about 1.2 million is forecasted for the Chinese market. Start of production (SORP) for the first GEM-based Chinese model is April 2019. The model is scheduled to see an annual volume of 112,000 units.

The GEM vehicle platform will be able to span several vehicle size classes and various body styles, such as sedans, hatchbacks, wagons, crossovers and MPVs.

An official GM investor’s presentation stated that the “GEM launch beginning in 2019”, and that its launch will “provide future opportunities” from a financial performance standpoint.

It is believed that GM Korea along with Holden, GM’s Australian and New Zealand division, will not see any/many GEM-based vehicles. Instead, these developed markets that happen to be part of GM International will have a lineup sourced from the GM North America portfolio.

Though yet to be confirmed, it is possible that the GEM platform is part of the GM VSS initiative (Vehicle Set Strategy) that has GM consolidating to four global platforms. The four GM vehicle sets have been identified as follows:

As such, it is possible that the GEM platform is actually part of the VSS-F initiative.

wide-ranging vehicle architecture to enhance the competitiveness of its mainstream Chevrolet brand in the world’s primary emerging markets.

The single new vehicle “platform,” and an all-new engine to accompany it, will replace several current platforms that serve as the foundation for a variety of vehicles GM currently sells in markets such as China, India, Brazil and Mexico,

The GM GEM platform will support a new global engine for developing markets.

Expected applications of the GM GEM platform are as follows.

It is currently unclear whether the GM GEM platform will also underpin vehicles from GM’s joint venture partners, namely Baojun and Wuling. 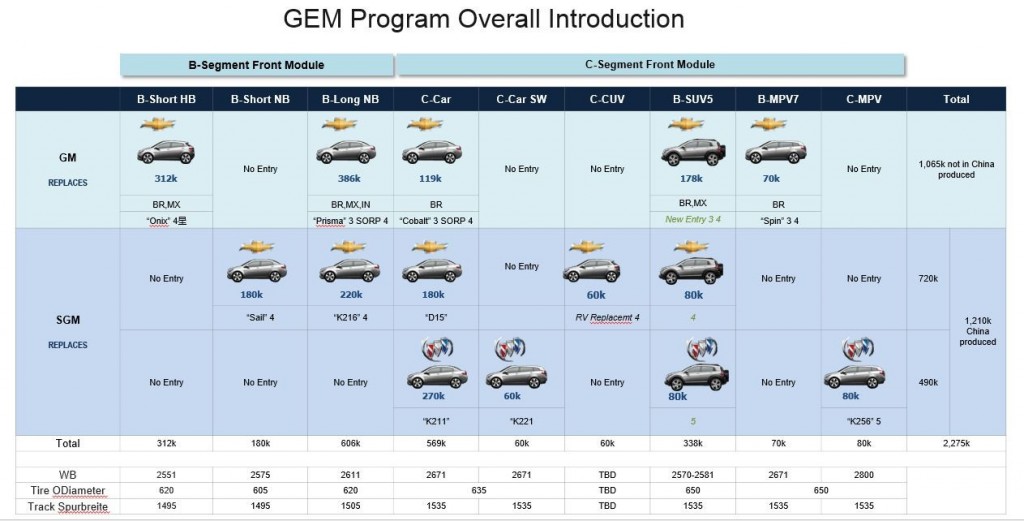 The GM GEM platform will replace the following existing platforms:

It is currently unknown what platform will replace the GM GEM platform. One potential option is one of the GM Vehicle Sets such as VSS-F, which is more of a flexible vehicle set than a platform in its own right.