The LV1 is a 4.3-liter six-cylinder engine produced by General Motors for use in large vans.

The engine is essentially the same as the 4.3L LV3 V-6, but without Active Fuel Management technology. It is part of the EcoTec3 engine family.

GM engineers spent more than 10 million hours creating the technology within the 4.3L V-6 LV1 engine. Every millimeter of the combustion system was carefully designed to support the ideal combination of Direct Injection and Variable Valve Timing, making the most of power, torque, and efficiency.

The EcoTec3 engine family features three state-of-the-art technologies to make the most of power, torque and efficiency across a broad range of operating conditions:

“We believe these are the most technologically advanced engines ever offered in light-duty pickups, and they are 100 percent truck – specifically designed for the way customers use trucks in the real world,” said Jordan Lee, Small Block chief engineer and program manager.

“They have all the power and torque needed to confidently handle the tough jobs, and they seamlessly switch to four-cylinder mode to increase efficiency during light-load driving.

“This is technology no other truck maker can match, and we offer it in every one of our EcoTec3 engines, for every one of our customers,” said Lee. “It is not an extra cost feature. You get our best and most sophisticated technology regardless of trim level.”

Although they share only a handful of parts with previous Silverado engines, the new EcoTec3 engines build on experience gained from millions of trucks and billions of real-world customer miles, while incorporating the latest in advanced materials and combustion systems.

“The combination of straightforward mechanical systems, the latest in materials, and an advanced combustion system enable us to improve power and efficiency, while also reducing noise and vibration,” said Lee. “We think truck customers will find our new engines to be the right tools for the toughest jobs, while helping hold down ownership costs over the long run.”

At the heart of the new EcoTec3 engine family is an advanced combustion system that maximizes the potential of the direct fuel injection system, cylinder deactivation, continuously variable valve timing and other technologies.

Development of this advanced combustion system involved extensive design and engineering by GM’s global powertrain organization. More than 100 iterations of the combustion systems were evaluated through computer modeling before a final design was selected for each engine variant. The overall engine design involved more than 10 million hours of computational CPU time, with the combustion process alone accounting for more than 6 million of those CPU hours.

“Owning a truck doesn’t mean settling for second-best technology,” said Lee. “Our new EcoTec3 engines harness some of the most advanced powertrain technologies in the world to meet the specialized demands of truck owners.”

For example, truck engines often need to provide maximum power under heavy load for long periods of time, such as towing a trailer up a mountain grade or slogging through mud at a job site. A rugged, large displacement engine is well suited to reliably providing this power and torque, year in and year out.

“For the 2014 Silverado 1500, these larger displacement EcoTec3 engines can now instantly switch to four-cylinder mode to improve efficiency when less power is required. It gives customers the best of both worlds – a rugged truck engine when they need it, with improved efficiency in light-load driving,” said Lee.

The ability to more precisely control combustion also enables the new engines to run with a higher compression ratio – 11.0:1 for the versions with regular fuel recommended. This higher compression is one of the best ways to simultaneously increases both power and efficiency.

This increased efficiency can now be maintained over a broader range of operating conditions. For example, when towing a trailer on a hot summer day, Silverado’s advanced combustion system can reduce the need to trim back spark advance to control detonation, helping maintain both performance and real-world fuel efficiency, even when the going gets really tough.

Emissions are also reduced, particularly during cold starts, when hydrocarbon emissions are cut by about 25 percent.

The new EcoTec3 engines use direct fuel injection, which precisely meters fuel directly into the cylinders, to optimize combustion over a broad range of conditions. The engines also feature a new cylinder-head design and a new, sculpted piston to optimize the mixing of air and fuel in the engine and the burning of the mixture to create power.

The heads features smaller combustion chambers shaped to complement the unique topography of the piston heads. The smaller chamber size and sculpted pistons produce a compression ratio of 11.0:1 or higher, depending on the engine, while the heads features large, rectangular intake ports with a slight twist to enhance mixture motion.

To further enhance combustion, the intake and exhaust valve positions have been switched from previous versions, and the valves are now slightly canted toward the cylinder centerline. Also, the spark plug angle has been revised and the electrode is now closer to the center of the chamber to support optimal combustion.

The pistons feature unique sculpted topography that was optimized via extensive computer analysis to precisely direct the fuel spray for better mixing and more complete combustion. The contours of the piston heads are machined after casting to ensure dimensional accuracy – essential for precise control of mixture motion and the compression ratio.

“GM pioneered cylinder deactivation technology, and we consider it a great technology for improving the efficiency of full-size trucks,” said Lee.

The system uses oil pressure, controlled by the powertrain control module, to deactivate the lifters on selected cylinders, closing the valves for those cylinders. It deactivates four of the cylinders on the V8 engines and two cylinders on the V6 under light load conditions – operating the engines as a V-4 – and seamlessly reactivates the cylinders when the driver demands greater power. The transition takes less than 20 milliseconds and is virtually imperceptible.

“This is another great example of using a relatively simple mechanical system and powerful software to provide a real benefit to our customers,” said Lee.

The LV1 engine is manufactured at the following GM assembly factories: 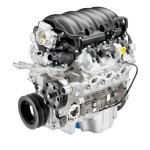 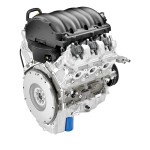 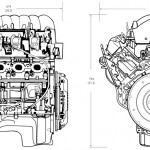