The LF3 is a six-cylinder, 3.6 liter twin turbocharged engine produced by General Motors for use in large and high-performance vehicles. It is part of GM’s high-feature (HF) V6 engine family.

The architecture of the LF3 is based on the naturally aspirated 3.6L V6 LFX, but with almost entirely all-new components. The LF3 is the most powerful V6 ever from General Motors, it is also the most power-dense six-cylinder engine in the midsize luxury segment. In the CTS Vsport, the LF3 makes 420 horsepower (313 kW) and 430 lb.-ft. (583 Nm). In the XTS Vsport, the engine makes 410 horsepower (306 kW) and 369 lb.-ft. of torque (500 Nm). All figures are SAE-certified.

Widely known to increase power, performance, and efficiency, turbocharging is also known for its delay in the delivery of power — otherwise known as “turbo lag” — which has historically been the technology’s key limitation. The LF3 aims to change that by using a unique combination of two smaller turbochargers, an efficient charge air cooler, top-mounted throttle body, and shorter air pathways.

The result is that approximately 90 percent of the engine’s peak torque is available from 2,500 rpm to 5,500 rpm, giving the powerplant a broad torque curve that drivers feel as strong, willing power in almost all driving conditions.

The patented air flow design of the LF3 eliminates circuitous heat-exchanger tubing and makes the most of engine packaging efficiency to improve torque response time over other air flow designs. 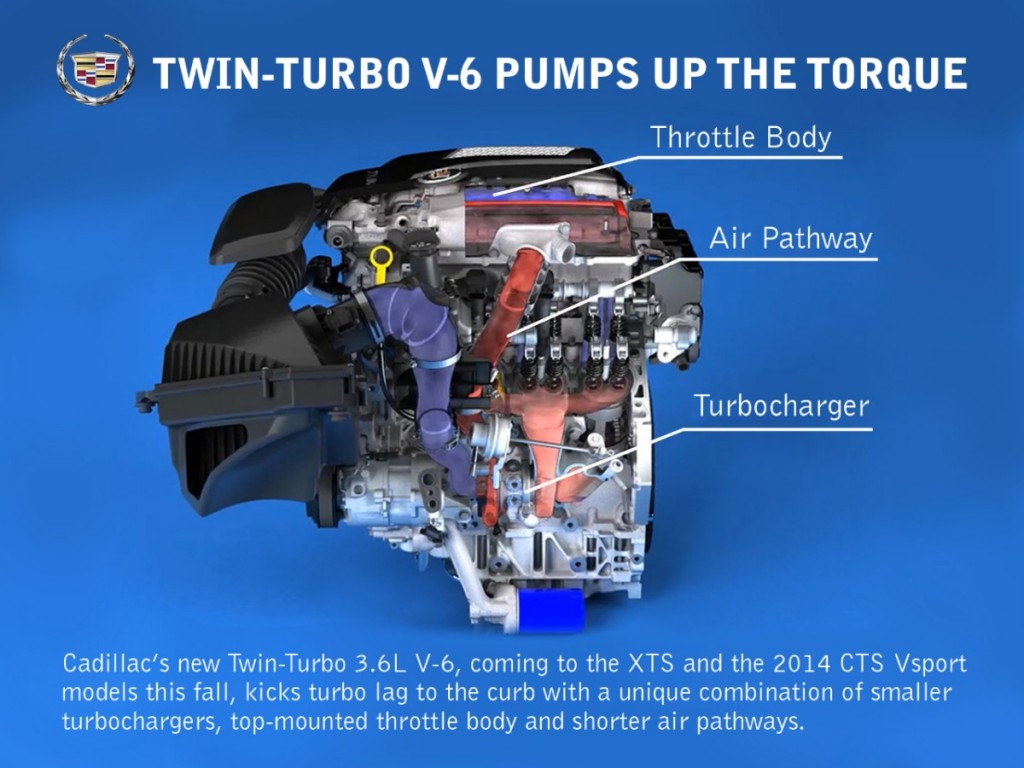 When compared to a conventional design with a chassis-mounted heat exchanger, the air flow routing volume is minimized by over 60 percent, while the water-to-air cooler system achieves more than 80 percent cooling efficiency with only about 1 psi (7 kPa) flow restriction at peak power for fast torque production.

“By creating a very short path from the turbos to the throttle body, the compressors are able to draw air directly from the inlet box and send pressurized air through the intercooler immediately,” said GM-Cadillac assistant chief engineer for the 3.6L engine Richard Bartlett. “This gives the driver a more immediate feeling of power on demand.”

Using two smaller turbochargers over a single, larger turbo also helps ensure immediate performance, since the smaller turbochargers spool up quicker to generate horsepower-building air pressure that is fed into the engine. An integrated charge air cooling system contributes to the engine’s air routing efficiency since the compressors blow through very short pipes up to the intercooler.

The single, centrally located throttle body located at the top of the engine controls the air charge from a pair of turbochargers after the temperature is reduced in the intercooler. Such a design assists in more immediate torque response and reduces complexity by eliminating the need for two throttle bodies.

Taken as a whole, the two smaller turbochargers, top-mounted throttle body, and shorter air pathways help sustain peak torque over a broad range — from 1,900 to 5,600 rpm, resulting in a confident feeling of power in almost all driving conditions, such as during acceleration or overtaking traffic on the highway.

The intercooler design of the LF3 builds on GM’s expertise learned from the 6.2L supercharged engine (LSA) found in the second-generation CTS-V Series. The end result is “more performance for drivers without sacrificing efficiency”, said Bartlett.