The 6.6-liter LB7 Duramax turbo-diesel engine was the result of a joint effort between General Motors and Isuzu, and was utilized by the first-generation Chevrolet Silverado HD and GMC Sierra HD.

The LB7 was first produced back in 2001 through 2004 for use in Chevrolet Silverado HD and GMC Sierra HD models, where it made up to 300 horsepower and 520 pound-feet of torque, and was mated to a commercial-grade 5-speed automatic Allison transmission.

While the LB7 is renowned for its overall reliability and simplicity versus newer diesel powerhouses. The LB7 was featured first-in-class common rail direct fuel injection, and an infamous characteristic of the LB7 is an injector failure issue. The failure rate was high enough to trigger a recall, wherein GM replaced the original injectors and extended the warranty to 200,000 for the new components. Reports indicate that poorly filtered fuel was one of the leading causes of failure, though aftermarket manufacturers have since stepped in to relieve this problem. Aside from this fueling issue, the LB7 is regarded as a very stout power plant.

The LB7 Duramax V8 would eventually evolve into the current-day

The 6.6L Duramax LB7 engine was manufactured at the GM Duramax plant in Moraine, Ohio, USA. 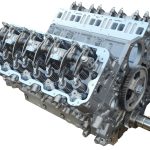 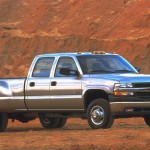