The 6.0 liter V8 L76 engine was produced by General Motors for use in trucks and performance sedans. It is part of GM’s Gen IV Small Block engine family and was first introduced in the 2006 Holden Commodore sedan.

There are two specific variants of the L76, one for GM trucks and the other for sedans, and they feature several key performance differences.

The 6.0L L76 engine debuted in the 2006 Holden Commodore, and was eventually used in several other sedan and truck applications. It is extremely similar to the the 6.0L LS2 engine that debuted in the 2005 Chevrolet Corvette C6, featuring an all-aluminum construction.

The key difference between these Gen IV engines is the inclusion of General Motors’ Active Fuel Management system, which was sometimes referred to as “Displacement on Demand.” Put simply, LS2 engines with this system were designated as L76. 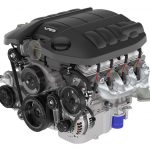