The GM L3B is a turbocharged gasoline engine produced by General Motors for use in various vehicles, including full-size pickup trucks and cars. Displacing 2.7 liters in an inline-four cylinder configuration, the L3B is a clean-sheet design for General Motors. The engine was developed from the outset as a truck engine.

The GM L3B engine made its debut in the 2019 Chevrolet Silverado 1500 and 2019 GMC Sierra 1500 producing an SAE-certified 310 horsepower and 348 pound-feet of torque. The engine received several updates for the 2022 model year refresh of GM half-ton pickup trucks, the 2022 Silverado 1500 and 2022 Sierra 1500, resulting in the creation of a high-output version with higher levels of torque.

Specifically, the high-output version of the L3B engine saw its torque increase from 348 to 420 pound-feet in light-duty pickups. GM has not confirmed whether or not the changes will carry over to other applications, such as the Cadillac CT4-V. Weeks after the reveal of the refreshed 2022 model year trucks, GM Authority exclusively uncovered that the updated engine will actually make 430 pound-feet of torque in the 2022 Silverado 1500 and 2022 Sierra 1500, instead of 420 pound-feet originally announced.

The motor was developed specifically for truck applications, and the motor delivers peak torque from 1,500 to 4,000 rpm. Additionally, it makes 22 percent more torque than the 4.3L V-6 LV3 it replaces.

“The new 2.7L Turbo is a technological marvel, with our most advanced valvetrain,” said Tom Sutter, chief engineer for the 2.7L Turbo. “With a broad, flat torque curve and quick throttle response, it punches above its weight, delivering surprising performance and efficiency.”

Designed As A Truck Engine

To help generate the strong low-end torque customers expect in a truck, it was designed with a long piston stroke of 4.01 inches (102mm), which is the distance the piston travels up and down within the cylinder.

The long stroke enables improved combustion and thus a higher compression ratio. Typically, a long stroke can increase the load of the pistons against the cylinder walls, generating more friction. That’s alleviated in the 2.7L Turbo with an offset crankshaft. It is slightly off-center of the cylinders, allowing a more upright position for the connecting rods during their movement.

To support the high cylinder pressures that come with turbocharging, the crankshaft and connecting rods are made of forged steel and the pistons are made of a tough aluminum alloy with a cast iron ring groove insert.

All elements of the 2.7L Turbo were designed for the demands of turbocharged performance in a truck environment, and the engine was subjected to the same rigorous durability standards as the Silverado’s proven V-8 engines.

The 2.7L Turbo features an aluminum block and cylinder head for reduced mass.

The cornerstone of the 2.7L Turbo L3B is an innovative double overhead cam valvetrain that enables:

The use of these three technologies has resulted in GM giving the engine’s valvetrain the TriPower moniker.

In fact, the innovative valvetrain is GM’s first to incorporate variable lift, duration and Active Fuel Management to optimize performance and efficiency across the rpm band. It is a key reason the engine’s peak torque is available at only 1,500 rpm.

“It’s like having different engines for low- and high-rpm performance,” said Sutter. “The camshaft profile and valve timing is completely different at low and high speeds, for excellent performance across the board.”

The camshaft design alters the lift of the intake and exhaust valves. As the engine load changes, electromagnetic actuators allow a movable shaft containing different cam lobes to shift imperceptibly between high-lift and low-lift profiles.

Lift is the distance the valve travels from its seat when opened, and duration is the amount of time the valve remains open. Higher lift and longer duration allow more air to flow into the combustion chamber, so the system’s high-lift lobe profile enhances performance at higher rpm, while the low-lift profile optimizes efficiency at low- and mid-range speeds.

The 2.7L Turbo engine employs an advanced dual-volute turbocharger that elevates the performance and efficiency advantages of a conventional turbo, with quicker response and enhanced low-rpm torque production.

Rather than a single spiral chamber (volute) feeding exhaust gas from the exhaust manifold to drive the turbine on the turbocharger, the dual volute design has a pair of separate chambers with two exhaust gas inlets and two nozzles to drive the turbine. The design allows the exhaust pulses of the engine to be leveraged for faster spool-up and subsequent boost production, particularly at low rpm, where the effect significantly enhances torque output and drivability.

It works in unison with the engine’s integrated exhaust manifold/turbocharger housing, which splits the exhaust channels from the cylinder head so the exhaust flows through two separate channels in the turbo housing, based on the engine’s exhaust pulses. When complemented by the precision of the engine’s valvetrain, that separation leverages exhaust scavenging techniques to optimize gas flow, which decreases exhaust gas temperatures, improves turbine efficiency and reduces turbo lag.

With the charge-air cooler, the pressurized, heated air generated by the turbocharger is pumped through a heat exchanger before it enters the engine. That lowers the air charge temperature by about 130 degrees F (74 C), packing the combustion chambers with cooler, denser air that enhances power production. The system achieves more than 80 percent cooling efficiency with less than 2 psi (12 kPa) flow restriction at peak power, contributing to the engine’s available torque production at low rpm. Additional engine technologies supporting the engine’s performance and efficiency include:

The 2.7L L3B engine is manufactured at the GM Spring Hill plant in Tennessee, USA. 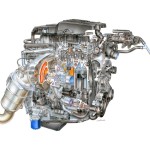 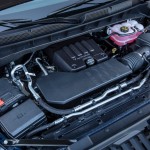 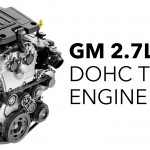 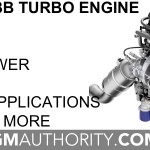 Discuss the turbocharged 2.7-liter L3B four-cylinder engine in one of our forums.