The 6.6-liter LMM Duramax V8 diesel engine was introduced midway through the 2007 model year, when it replaced the 6.6 liter LBZ Duramax variant. As such, it powered Chevrolet Silverado Heavy-Duty and GMC Sierra Heavy-Duty pickup trucks through 2010. During that time, the LMM had an SAE-certified rating of 365 horsepower and 660 pound-feet of torque.

Notably, GM was able to improve the Duramax V8’s performance despite more restrictive emissions regulations. Another accomplishment during this time period is the fact that the millionth Duramax V8 engine built was an LMM, assembled in April 2007.

The ability to dissipate heat is already a critical component in powertrain management, however, it became even more prominent with the addition of the Diesel Particulate Filter (DPF) and increased Exhaust Gas Recirculation (EGR), which was due to a then-new regulation that required nitrogen oxide (NOx) emissions to be reduced by 50 percent. In order to compensate for the extra duty, a larger EGR cooler was fitted to the LMM Duramax V8.

Despite the more stringent emission controls, the LMM still managed to pose an increase of 5 horsepower and 10 pound-feet of torque compared to its predecessor. Another refined bit of hardware featured on the LMM is a revised fuel injector design. While the LBZ was equipped with a 7-hole, 158-degree injector nozzle, the LMM returned to a 6-hole nozzle design with a 159-degree range.

One unfortunate similarity between the LMM and the LBZ are the infamous pistons, which are prone to cracking under heavy load.

The 6.6L Duramax LMM engine was manufactured at the GM Duramax plant in Moraine, Ohio, USA. 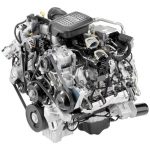