The 6.6-liter LBZ Duramax V8 diesel engine was introduced midway through the 2006 model year, when it replaced the 6.6 liter LLY Duramax variant. As such, it powered Chevrolet Silverado Heavy-Duty and GMC Sierra Heavy-Duty pickup trucks through 2007, making up to 360 horsepower and 650 pound-feet of torque. Notably, the LBZ is one of the most desirable Durmax V8 engines due to the improvements over its predecessors as well as an element of simplicity compared to modernized emission controls.

As mentioned, the LBZ Duramax V8 had an SAE-certified output rating of 360 horsepower and 650 pound-feet of torque, which is an improvement of 50 horsepower and 45 pounds of twist compared to the outgoing LLY Duramax. The enhanced performance was due to a host of revisions and new tech, including a more rigid engine block, significantly stronger connecting rods, revised fuel injectors with a jump in the injection system’s maximum pressure – from 23,000 to 26,000 psi – as well as a larger inlet manifold for the turbocharger.

While the LBZ wasn’t entirely free of emissions controls, the Exhaust Gas Recirculation (EGR) and Diesel Oxidation Catalyst (DOC) did inhibit performance and fuel economy as much as later emissions components.

That said, the beloved LBZ was not without its faults. Time has come to identify the pistons as the weak point of this particular Duramax V8 variant, as the cast aluminium bits are prone to cracking, especially when the engine’s output is boosted. Members of the community also point to the use of wrist pin bushings as a leading cause of failure.

The 6.6L Duramax LBZ engine was manufactured at the GM Duramax plant in Moraine, Ohio, USA. 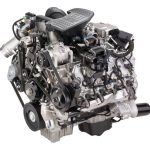