GM HydroTec fuel cell and power cube technology is a hydrogen propulsion product that can be implemented in a wide range of applications, including locomotives and aircrafts. 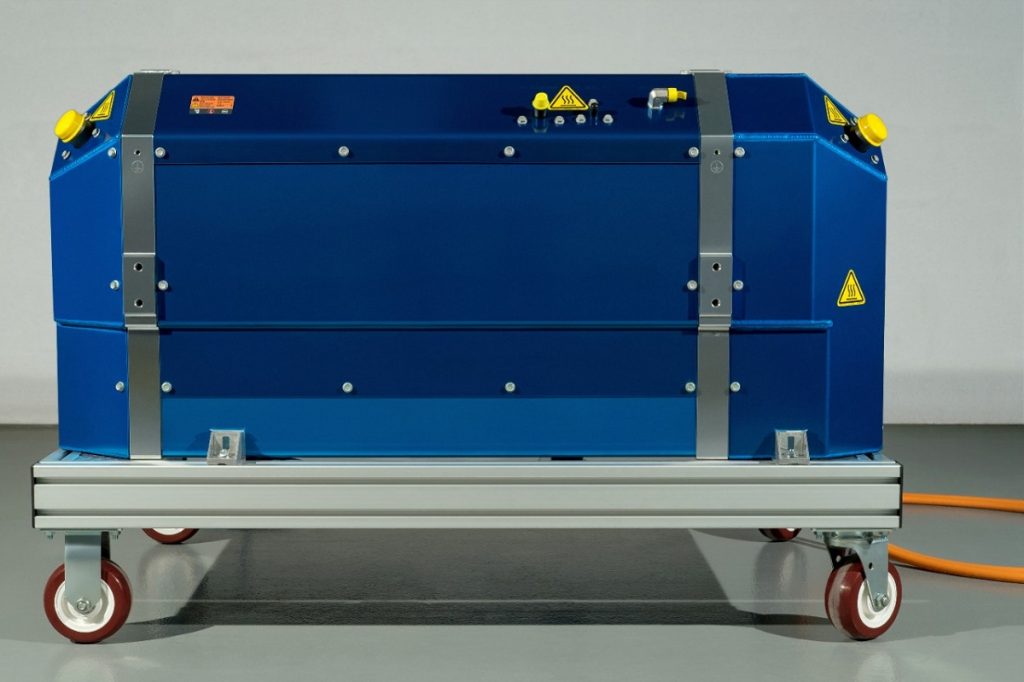 Before going deeper into what a power cube is, we should first clarify that GM HydroTec technology is an alternative fuel source that uses hydrogen as an energy storage mechanism. The hydrogen is run through a fuel cell (or series of fuel cells) to create an electrical current that powers a motor (or multiple motors).

Such technology can be used in a wide range of applications as it offers various benefits. First and foremost is a reduction in harmful bi-products, as the only waste produced by such a mechanism is clean water. As mentioned previously, the process is relatively quiet, especially when compared to a conventional internal-combustion engine. This aspect along with the fact that it generates a low heat signature makes it particularly useful for military forces.

Of course, quiet operation is also a benefit to commercial and passenger vehicles. Compared to EV battery packs, a HydroTec fuel cell or power cube is significantly lighter, which is a characteristic that’s necessary for aircrafts and beneficial to applications that are aiming to increase range. The fact that hydrogen fuel cells has the potential to be used as a direct power source or a in conjunction with a battery power source makes the technology that much more versatile. 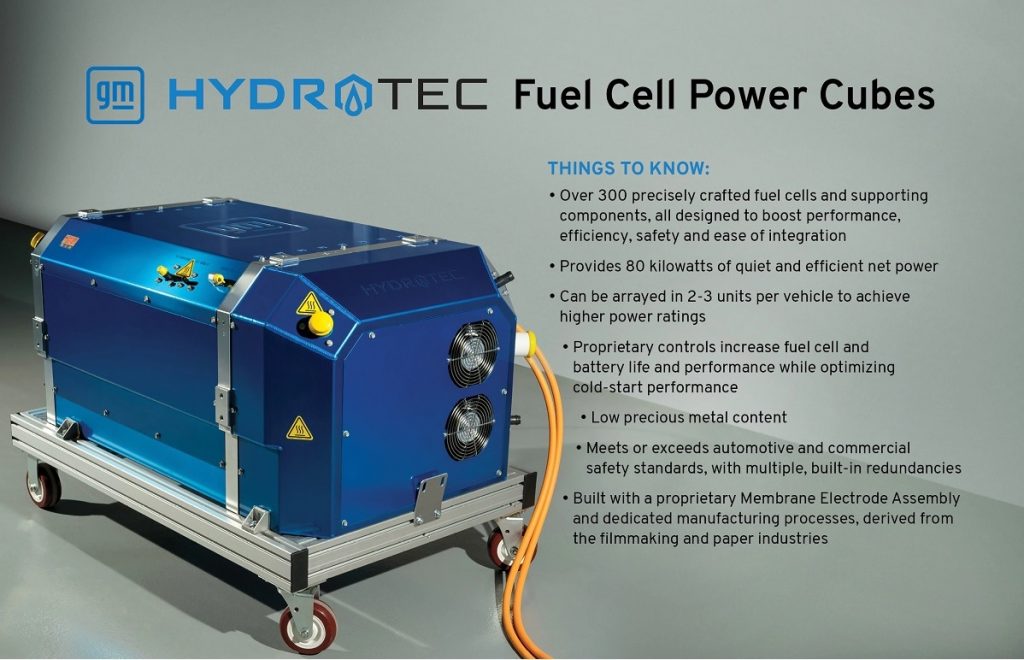 HydroTec technology can be used as a direct energy source, but it also has the potential to be used in conjunction with GM’s Ultium battery technology as well as GM’s Ultium drive technology.

While various partnerships and applications are currently under development, the use of hydrogen still faces a couple of challenges, including limited infrastructure and the cost of processing hydrogen itself.

General Motors has entered into several partnerships that are focused on the use of its HydroTec technology, including power cubes. For starters, the U.S. military partnered with GM to demonstrate the practicality and applicability of hydrogen fuel cell technology, producing the world’s first military fuel cell vehicle fleet and accumulating 3.2 million driven miles through GM’s Project Driveway.

Then, GM Defense used the technology to create the Chevy Colorado ZH2 Concept, which was developed for the armed forces and offered the benefits of low acoustical and heat signatures as well as the advantages of on-board water production, exportable electric power and off-road capability. GM would go on to produce the Chevy Silverado ZH2 Concept, which was the first heavy-duty truck architecture capable of supporting the next-generation of vehicle requirements for higher payload, flexible configuration, longer range, and faster re-fueling times with a more compact and capable propulsion system.

GM also went on to develop the SURUS Concept, or Silent Utility Rover Universal Superstructure Concept, with the intention of “solving some of the toughest transportation challenges created by natural disasters, complex logistics environments and global conflicts”, according to GM. The platform was designed for commercial uses and could be adapted for military use.

GM has also entered a partnership with Navistar and will supply its Hydrotec hydrogen power cubes to the commercial truck manufacturer for use in its new International RH Series fuel cell semi-truck. Navistar says the fuel cell-powered semi will have a target range of 500+ miles and a hydrogen fueling time of less than 15 minutes. The General has since announced that it will offer a hydrogen-powered Medium-Duty truck of its own along with an all-electric variant. 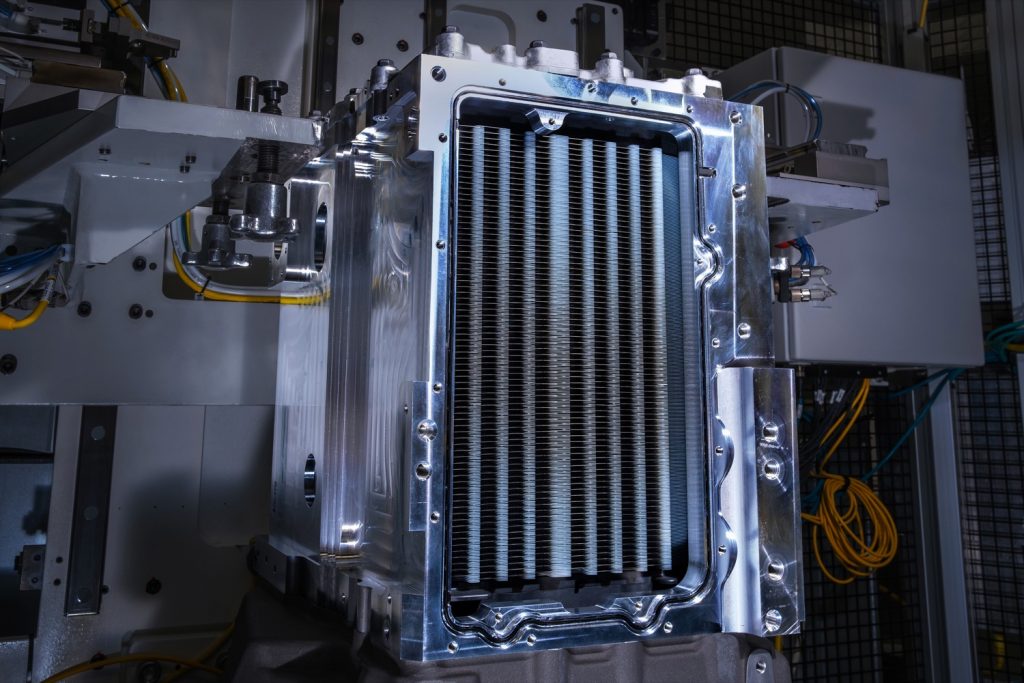 In that regard, it’s worth highlighting the fact that the use of HydroTec technology complements GM’s Ultium battery technology as the hydrogen fuel cells can potentially be used in conjunction with the batteries in a hybrid application, which allows for smaller battery packs thereby optimizing weight reduction. Additionally, the Ultium drive and motor technology is also complemented as those same motors can potentially be utilized in applications that use the fuel cells as an exclusive energy source.

Liebherr-Aerospace and General Motors have teamed up to develop a new hydrogen fuel cell power generation system for use in commercial aircraft. The new system will be partly based on General Motors’ Hydrotec fuel cell technology, and will include GM’s fuel cells, Hydrotec power cube, fuel system, and controls. This aircraft application illustrates one of the benefits afforded by the weight savings of HydroTec fuel cells and power cubes over an EV battery pack.