General Motors is going everybody in when it comes to electric vehicles in a push towards achieving its vision of zero emissions, zero accidents and zero congestion. As of November 2020, a total of 30 new GM EVs are planned for global markets. The majority of these will be based on the automaker’s new BEV3 flexible electric vehicle platform.

The following GM electric vehicles are available on sale today:

The two Bolt models are based on GM’s BEV2 platform. BEV2 will be sunset after two Bolts reach the end of their respective lifecycles.

General Motors has announced or hinted at plans to launch the following future GM EVs.

The automaker believes that getting to zero emissions will not happen overnight. As a result, it plans to leverage its existing BEV2 platform, which serves as the basis for the Chevy Bolt EV, by: 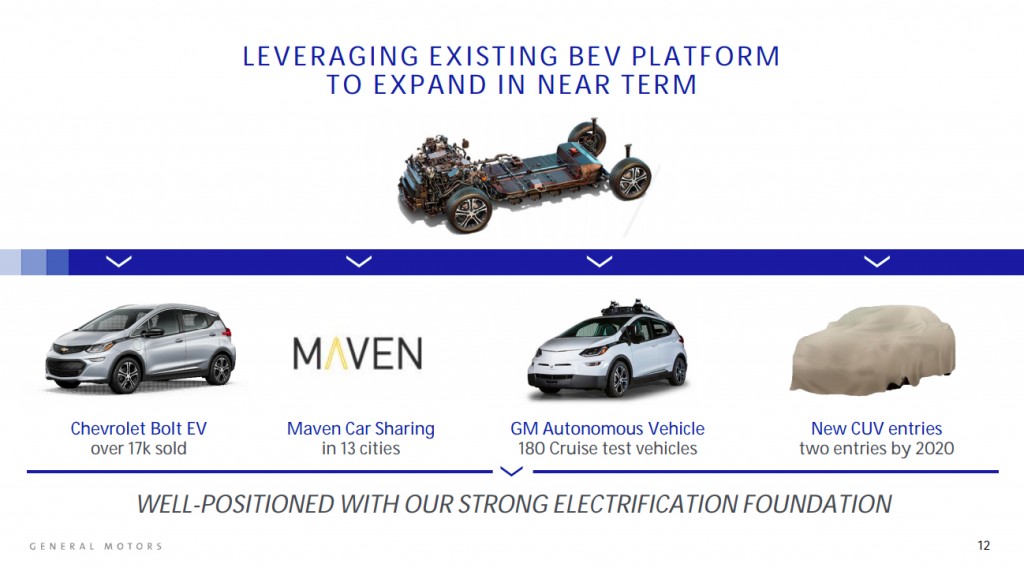 “General Motors believes in an all-electric future,” said Mark Reuss, who at the time served as General Motors executive vice president of Product Development, Purchasing and Supply Chain (prior to his promotion to be President in 2019). “Although that future won’t happen overnight, GM is committed to driving increased usage and acceptance of electric vehicles through no-compromise solutions that meet our customers’ needs.”

On October 2nd, 2017, GM made the following announcement:

In September 2018, Fletcher was appointed to the role of GM VP of Innovation. In that role, Fletcher, 52, will report directly to CEO Mary Barra, and will work on “identifying, integrating and accelerating business opportunities that make [GM’s] customers’ lives easier and drive long-term value to [GM] shareholders.”

In March 2020, General Motors held a conference called EV day where it made several announcements, including:

In November 2020, at a Barclay’s conference, General Motors CEO Mary Barra announced plans to increase its financial commitment to EVs and AVs by $7 billion and launch a total of 30 new electric vehicles globally. Prior to that, GM had set earmarked $20 billion for EV and AV investment and said it would launch 20 new EVs globally by 2023. This was before the COVID-19 pandemic, which had driven GM to further increase its commitment to battery electric and self driving vehicles. Barra said the company now plans to invest a total of $27 billion in EV and AVs through to 2025, helping it to launch 30 EVs worldwide within the same timeframe – more than two-thirds of which will be available in North America.

According to official press material, the future GM EVs will encompass EVs “at all price points,” and and for various lifestyles/uses including work, adventure, performance and family.” In addition, more than 40 percent of GM’s U.S. portfolio will be battery-powered by the end of 2025.

Lastly, GM said the short development cycle for the GMC Hummer EV is now the standard across all of its EV programs, bumping their respective development schedules forward. These newly expedited programs include a total of 12 different vehicles.