Chevrolet has introduced the SS Performance Sedan for the 2014 model year, resulting in the brand’s first rear-drive performance sedan since 1996. Based on GM’s Zeta vehicle architecture shared with such vehicles as the Chevrolet Camaro as well as the Holden Commodore, Caprice (Chevrolet) Caprice PPV), and Ute, the SS is — for all intents and purposes — a rebadged version of the Australian-market Holden VF Commodore range. In that regard, it’s a spiritual successor to the Pontiac G8, as the two cars represent different updates of the same vehicle, while being a four-door Camaro from a mechanical perspective. The car offers a single powertrain — the 6.2 liter V8 LS3 mated to a six-speed automatic transmission, and contains a notable amount of standard equipment.

Throughout its lifecycle, the SS sedan will be limited in availability, with some GM executives referring to the car as “four-door Corvette”.

The 2014 SS Sedan is Chevy’s first rear-wheel-drive performance sedan since 1996. The vehicle is designed to deliver performance on the street and on the track, and joins the all-new 2014 Corvette C7 Stingray and refreshed 2014 Camaro as Chevy’s line of performance vehicles.

The Chevy SS sports a design that blends aggressive styling characteristics with performance cues and premium details. Staggered front and rear wheels are pushed out to the corners to enhance the SS’ sporting, muscular stance. An aluminum hood with a subtle “power bulge” covers the V8 LS3, while a tapered rear with a tear-drop shape contributes to improved aerodynamic performance at the rear. The SS also features premium cues, including jewel-like chrome accents, standard high-intensity discharge headlamps, and light-emitting diode (LED) daytime running lights.

The side character line of the SS sedan extends from the hood to the trunk lid, creating a classic wig shape by further accentuating the planted appearance and muscular sheet metal. The vehicle’s design tapers at the rear as the C-pillar flows into the deckled — a design cue shared with other Chevrolet sedans.

At the rear, bright dual-exhausts hint at the sedan’s high performance nature, while delivering the throaty performance note enthusiasts expect from such a vehicle.

Upon launch, the Chevrolet SS is offered if five exterior colors, including:

Following its unveiling in early 2013, the SS sedan’s styling was received in a lukewarm way, with some stating that the design was not appropriately aggressive for a vehicle with such performance credentials.

The premium and spacious interior of the Chevrolet SS has room to comfortably seat five adults.

An integrated center stack includes infotainment, climate and other vehicle controls, while the center console of the SS houses extra-large dual cup holders that can accommodate a wide range of container sizes. The cup holders are not separated, so the space can also be used for small item storage. Fold-out rear cup holders are also located at the base of the center rear seating position. In addition, all four doors contain cup holders. An electric park brake frees up additional space in the center console.

Two auxiliary power outlets allow concurrent charging of items such as mobile phones, tablets and portable satellite navigation devices. One is located inside the covered central storage console, while the other is in the forward compartment at the base of the instrument panel, which is illuminated at night by ambient Ice Blue lighting.

The SS interior is offered exclusively in black. A power sunroof is available.

Chevy’s net-generation MyLink infotainment system, sometimes referred to as MyLink 2.0, is standard on the SS and is accessed via an eight-inch color touch screen.

The system’s icons allow access to everything — from navigation to phone and music apps such as Pandora. It’s also Chevy’s first use of natural language voice recognition that allows users to safety place calls, enter destinations, browse media, play music, and control other functionality by simply telling the vehicle what to do as if they were speaking to a person. The system is capable of storing up to 60 favorites, including radio stations (AM/FM/XM), contacts, destinations, music, and other media; the feature is especially convenient for those who travel to the same destination from different starting points on a regular basis and would like to save regularly-visited locations such as hotels and restaurants.

The eight-inch color touchscreen allows users to fling through lists, as well as swipe and drag just as they would on a tablet. Those with compatible smartphones can pair them with MyLink using Bluetooth or USB, enabling the ability to play music or other media through the vehicle’s speakers.

The system is designed to accommodate new features and enhancements and be highly customizable.

The Chevrolet SS is engineered for exceptional driving performance.

The SS is powered by GM’s proven and acclaimed LS3 Small Block V8 engine making an SAE-certified 415 horsepower (310 kW) and 415 lb-ft of torque. The eight-cylinder motor is mated to GM’s Hydra-Matic 6L80 six-speed automatic transmission with paddle-shift control. The engine’s torque is channeled to the rear axle, which has a 3.27 ratio. Engine oil and transmission coolers are standard.

At the front, a MacPherson-strut-based multi-link system with a direct-acting stabilizer bar features a forward-mounted steering rack and dual lower links with individual ball joints at the outer ends. A hydraulically damped bushing is used on the forward end of the tension link for improved ride isolation.

The rear suspension is a multi-link independent system with coil-over shock absorbers and decoupled stabilizer bar. It has high lateral stiffness for handling through three lateral ball joints per side with improved longitudinal compliance. A rubber isolated suspension frame isolates the body from road imperfections and drivetrain vibrations. The inclusion of more lightweight aluminum components, including the front steering knuckle and tension arms, delivers tremendous ride and handling characteristics.

The Chevy SS utilizes a variable-assist electric power steering system (EPS) that saves fuel by drawing energy only when the wheels are turned. The variable-effort nature of the system provides lighter parking efforts at low speed while requiring greater effort at higher speeds, making for a more direct steering feel. The system is also calibrated to detect constant driver steering wheel load by analyzing factors such as road camber and crosswind. The system will compensate to reduce steering effort to a more neutral level and lessen potential driver fatigue.

The 2014 Chevy SS features a comprehensive suite of standard safety features. The vehicle employs advanced technologies, such as radar, to help avoid crashes. Visual and audible alerts, depending on the alert feature, help drivers identify potential crash situations. They are designed to identify potential threats with sufficient warning to give the driver time to react and make changes.

The SS is also the first Chevrolet ever to offer Automatic Parking Assist. The standard feature provides hands-free parking help by utilizing an ultrasonic sensing system to detect the width and depth of either parallel or reverse right-angle parking spaces. While the driver controls the throttle, transmission and brake, Automatic Parking Assist controls the steering inputs necessary to park the vehicle.

Other standard safety features include:

OnStar’s RemoteLink Mobile App allows smartphone users to control vehicle functions, access vehicle information and send directions directly to the vehicle. An opt-in service called FamilyLink allows subscribers to stay connected to loved ones by checking the location of their vehicle online or by signing up for vehicle location alerts. The functionality will be free for 2014 model year vehicles.

The Chevrolet SS will carry a starting base price of $43,475.

Very few options will be offered, as the vehicle will contain a great deal of standard equipment.

Even before its official unveiling in February of 2013, automotive enthusiasts have clamored for a return of the Pontiac G8 — a vehicle often lauded for its superb driving experience, among other positive attributes. The G8, itself a left-hand-drive Holden Commodore from GM’s Australian division Holden, was discontinued when General Motors discontinued the Pontiac brand during its Chapter 11 restructuring in 2009, presenting an opportunity to give the Chevrolet brand a performance-focused rear-wheel-drive sedan.

Since then, various rumors have suggested that General Motors was, indeed, working on a plan to make the Commodore available in the States, but the first solid evidence of the vehicle arrived courtesy of now-retired General Motors vice chairman of product development Bob Lutz, who stated in January of 2010 that GM wanted to re-introduce the Commodore “as a high-end Chevrolet.” The executive stated that, “… when you get down to it the thrill of high performance driving is unmatched by anything that doesn’t have rear-wheel drive, bags of torque and a nice transmission. So there’s a possibility of a premium Chevrolet sedan that would be sold in limited numbers. Think of it as a kind of four-door Corvette.”

Then, in April of 2012, an accidental post on OnStar’s website stated that a Chevrolet SS Performance Sedan will be compatible with OnStar’s RemoteLink app. Given that this was the first time the public has heard of the Chevy SS Performance Sedan outside of GM’s filings with the U.S. Patent and Trademark Office, this was the second piece of solid evidence corroborating rumors that General Motors was planning on making the Holden Commodore available in the U.S.

Ahead of the official unveiling of the SS sedan on February 16, 2013, GM North America President Mark Reuss described the SS as a four-door Corvette, which speaks to the limited availability and premium nature of the SS. Ironically, the SS is mechanically similar to the Chevrolet Camaro, and not the Corvette. 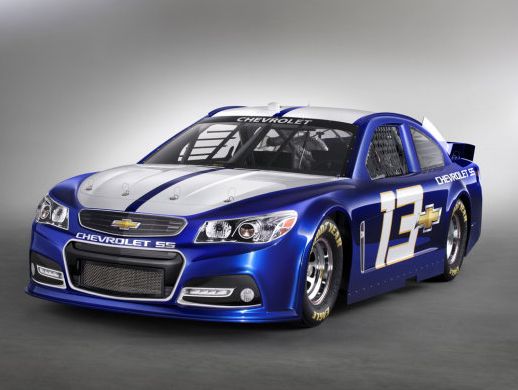 Alongside the production-intent SS Performance Sedan, Chevrolet also announced the SS Nascar Race Car, allowing Chevrolet to follow the age-old proverb of “racing what we sell” — demonstrating a tighter integration of the brand’s efforts in Nascar racing and actual vehicles available in dealer showrooms.

Although the two vehicles are mechanically unrelated, the two share similar body shapes: 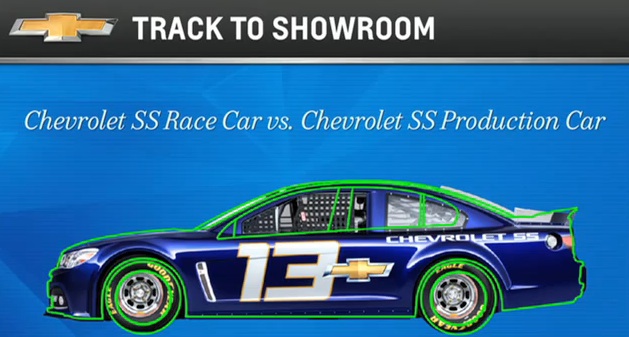