Chevrolet completely overhauls (redesigns and re-engineers) the Malibu midsize car for the 2016 model year, delivering an all-new vehicle that boldly steps in the future with improvements in comfort, fuel economy, connectivity, safety, and overall refinement.

The 2016 Malibu is an all-new vehicle representing the ninth generation of the Malibu nameplate.

While the eight-generation Malibu is regarded as a relatively good mainstream midsize car, Chevrolet is looking to grow its presence in the segment with this new model. As such, the 2016 Chevy Malibu aims to bring refinement to the Malibu nameplate while addressing specific issues widely recognized as the weak points of its predecessor, namely the small amount of rear-seat legroom and (rather-unnecessarily) hefty curb weight.

A larger, spacious, more fuel-efficient Malibu with more connectivity and higher levels of refinement than ever before.

To become more competitive in the midsize sedan segment and address the criticisms surrounding the eighth-generation Malibu.

The next-generation Malibu was at the 2015 New York International Auto Show as a 2016 model year vehicle.

“Midsize car customers tell us they want great fuel economy and connected technologies, wrapped in a gorgeous exterior. This is exactly what the 2016 Malibu was engineered to do,” said Jesse Ortega, Malibu chief engineer.

The exterior of the 2016 Chevrolet Malibu is longer and more dramatic than the model it replaces.

Compared to its predecessor, the 2016 Malibu is 2.3 inches (58 mm) longer thanks to a 3.6-inch (91 mm) increase in the model’s wheelbase, providing better in-cabin comfort and functionality.

Influenced by the 2014 Impala, the styling of the new Malibu advances Chevrolet’s global design language with features such as slim, sweeping headlamps and a progressive take on the brand’s characteristic dual-port grille. Three body-side creases also add drama to the design and help distinguish the Malibu as a contemporary Chevy.

The hood and the cowl – the area where the windshield meets the hood – are lower than those of the current model and contribute to the Malibu’s greater aerodynamic performance, as do active grille shutters on LS and LT models.

Premium design cues are incorporated on all models, with contemporary lighting technology featured across the lineup, including light-emitting diode (LED) daytime running lamps on LT and Premier models, as well as LED taillamps on the Malibu Premier.

The 2016 Chevy Malibu will be available in the following ten exterior colors: 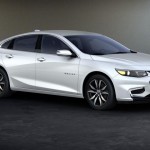 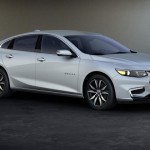 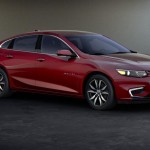 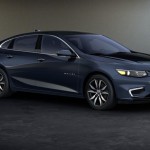 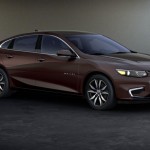 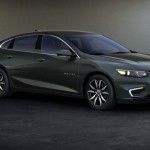 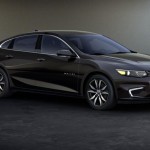 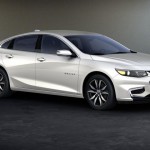 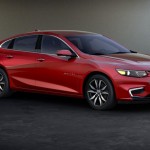 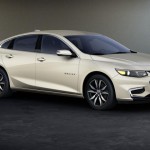 Complementing the ten exterior hues are three interior color combinations, each of which is offered in either cloth or leather: 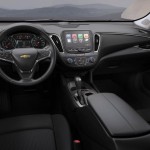 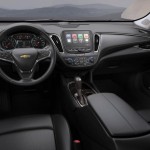 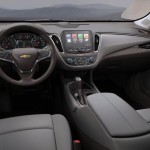 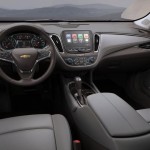 The cabin of the 2016 Malibu is more spacious, more comfortable and more connected: the longer wheelbase allows for a more open execution of Chevrolet’s signature dual-cockpit interior while rear legroom grows by 1.3 inches (33 mm).

Highlights of the 2016 Malibu’s interior include:

The 2016 Chevrolet Malibu delivers a multitude of in-vehicle new technologies, including:

Malibu’s 7-inch MyLink infotainment system gives owners a smart and simple way to access Android Auto and Apple CarPlay. The eight-inch version of MyLink will be compatible only with Apple CarPlay at the beginning of the 2016 model year. While development and testing are not yet complete, Chevy says that Android Auto compatibility may be available on the 8-inch version of MyLink later in the 2016 model year.

Each system builds off of the features smartphone users rely on most.

Apple CarPlay takes the iPhone features customers want to access while driving and puts them on the vehicle’s display in a smart, simple manner. That allows drivers to make calls, send and receive messages and listen to music right from the touchscreen or by voice via Siri. Apple CarPlay supported apps include Phone, Messages, Maps, Music and compatible third-party apps. A full list of those apps is at Apple.com/ios/carplay.

Android Auto is built around Google Maps, Google Now and the ability to talk to Google, as well as a growing audio and messaging app ecosystem that includes WhatsApp, Skype, Google Play Music, Spotify, and podcast players.

Many features can be controlled via voice commands through a button on the steering wheel, helping drivers spend more time with eyes on the road and hands on the wheel.

The 2016 Chevrolet Malibu is offered with a choice of two turbo-charged four-cylinder engines mated to either six- or eight-speed automatic transmissions. A full-hybrid model is also offered.

The 1.5L turbo engine also enables the 2016 Malibu to deliver a GM-estimated 37 mpg on the highway and 27 mpg in city driving – an 8-percent increase over its predecessor. On the highway, 1.5L-equipped models also feature active grille shutters that reduce aerodynamic drag to optimize efficiency.

For those looking for more power, the 2016 Malibu offers the turbocharged 2.0L LTG Ecotec engine making 250 horsepower (186 kW) and 258 pound-feet of torque (350 Nm). The higher degree of performance does not come at the expense of good efficiency, as Malibu 2.0T models are GM-estimated at 22 mpg in the city and 32 on the highway.

The 1.5L turbo engine is matched with a six-speed automatic transmission.

An 80-cell, 1.5 kWh lithium-ion battery pack provides electric power to the hybrid system. It can power the Malibu Hybrid up to 55 miles per hour (88 km/h) on electricity alone. The gasoline-powered engine automatically comes on at higher speeds and high loads to provide additional power.

In addition to the drive unit, the Malibu Hybrid also shares the 2016 Volt’s blended regenerative braking system, which provides maximum kinetic energy recovery during braking to be stored in the battery system to help maintain charge.

Beneath the new Malibu’s athletic-looking skin is a stronger, lighter body structure that contributes to its efficiency and driving dynamics. Greater use of high-strength steels enables engineers to design the body structure with thinner components in some areas, delivering comparable crash performance with lower weight.

The 2016 Malibu uses the regular-wheelbase version of GM’s new front-wheel-drive vehicle architecture known as the E2XX platform. The E2XX architecture is shared with the second-generation Opel-Vauxhall Insignia and sixth-generation Buick Regal. E2XX is longer, wider, and lighter than the Epsilon 2 architecture it replaces.

The Malibu’s all-new architecture accounts for more than a third of its nearly 300-pound weight reduction.

This is accomplished via a new and fuel-efficient engine range, a lower curb weight and better aerodynamics – factors that combine to contribute to better fuel efficiency.

By comparison, the eighth-generation Malibu delivered the highest fuel economy of 36 MPG.

The feature mutes the audio or any device paired with the vehicle when front-seat occupants aren’t wearing their safety belts. Teen Driver also provides audible and visual warnings when the vehicle is traveling over predetermined speeds.

To use Teen Driver, a parent enables the feature with a PIN in the Settings menu of the Malibu’s MyLink system, which allows them to register their teen’s key fob. The system’s settings are turned on only to registered key fobs.

Chevrolet’s system is the first in the industry with a built-in component that lets parents view on a display how their teenager drove the vehicle. Maximum speed reached, distance driven and number of times active safety features were engaged are among the parameters that can be confirmed.

The 2016 Malibu will continue to include GM’s OnStar telematics technology, which includes all of the OnStar services, including Automatic Crash Response and in-vehicle Wi-Fi feature enabled by a high-speed 4G LTE connection.

The 2016 Chevy Malibu will continue offering OnStar 4G LTE, which includes all of the OnStar services as well as the in-vehicle Wi-Fi hotspot enabled by a high-speed 4G LTE connection.

The MSRP does not include an $875 destination freight charge.

The 2016 Malibu will start at $22,500 for the base L trim. That base price undercuts key rivals such as the Ford Fusion, Toyota Camry, Honda Accord and Nissan Altima. For the money, the standard equipment found includes the new 1.5-liter turbocharged four-cylinder engine with stop/start technology, ten airbags, cruise control and push-button start with passive entry.

Climbing into the LS trim makes the case to drop the extra $1,495. Starting at $23,995, the 2016 Malibu LS adds a standard seven-inch MyLink infotainment system, complete with Apple CarPlay and Android Auto capability and a rear-view camera.

Moving right along to the LT trim, buyers will get daytime running lights and a choice of either the base 1.5-liter turbo four for $25,895, or the 2.0-liter turbocharged four-cylinder, which will bump the price up accordingly to $29,495. The 2.0-liter turbo is also paired to an eight-speed automatic transmission.

As you may have already heard, LTZ is out, and Premier is in for the top-of-line Malibu. The Premier trim will be sold exclusively with the 2.0-liter turbo, and at a starting price of $31,795. Of course, a host of new technology can be found on the range-topping trim level, with some being firsts for Malibu, including Lane Keep Assist, Front Pedestrian Braking, Low Speed Front Automatic Braking and the brand’s new Teen Driver System.

GM still estimates the base 1.5-liter turbo to return a respectable 27 mpg city and 37 mpg highway, while the more potent 2.0-liter turbo knocks GM estimated mpg ratings down to 22 city and 32 highway.

Chevrolet says that it will price the 2016 Malibu Hybrid at a later date, most likely once its unsurpassed 48 mpg city and 45 mpg highway estimations are verified by the EPA.

To attempt to see more details of the vehicle, we enhanced the teaser image like so:

The brand continued to release information on the new car every week until its reveal.

The 2016 Malibu has been confirmed to be available in the following markets:

It will be interesting to see whether Chevrolet will offer the new Malibu in South America, a market in which the model has traditionally not been available.

One of the biggest complaints about the eighth-generation Chevy Malibu has been about the lack of all-wheel drive. For reasons unbeknownst to us, General Motors has decided not to include or offer all-wheel drive on the vehicle, despite its Epsilon 2 vehicle architecture being capable of it.

In addition, several rivals are beginning to offer all-wheel drive on their midsize sedans, with a notable example being the Ford Fusion, Chrysler 200, and Subaru Legacy, to name a few.

Competition
The next-gen Malibu will compete in the mainstream midsize sedan segment against the:
Holden Malibu

In 2013, GM introduced the eighth-generation Chevy Malibu in Australia and New Zealand as the Holden Malibu. However, the ninth-generation Malibu was not made available in Australia. Instead, the vehicle was replaced by the Commodore ZB, which shares the same E2 platform as the Malibu.

The ninth-generation Chevrolet Malibu is produced at the following plants: