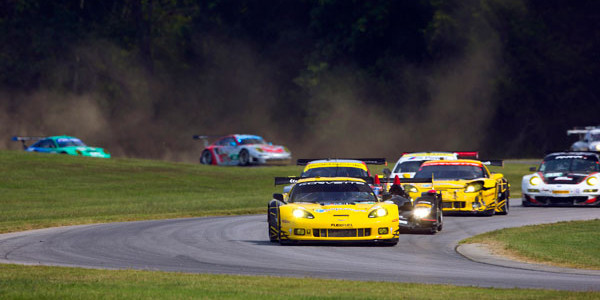 2013 marks the 15th year that Corvette Racing has been competing in international road racing. Currently, the team fields two cars, known as C6.Rs, in the GT Class of the American Le Mans Series (ALMS).

Since the C6.R is based on the Corvette ZR1 supercar, it has an immediate, direct, and strong connection to the production version of the American performance icon that is the Chevrolet Corvette. Since the rules of the GT class require that the car use many production-based components, the opportunity for the two-way transfer of technology between the race track and the production Corvette is vast.

For starters, the C6.R utilizes the body design, aerodynamic package, aluminum frame, chassis structure, steering system, and windshield of the C6.R, among other components. Corvette Racing has further equipped the Vettes with the safety and performance equipment that allows them to participate in endurance racing, as permitted by the rulebook.

Compared to the ZR1, modifications include (but are not limited to):

In addition, the all-new 2014 Corvette C7 will make its way to Corvette Racing for the 2014 racing season.

In 1911, race car driver Louis Chevrolet and financier William Durant founded Chevrolet, and the reputation won by Chevrolet in racing was key in building the new automaker. In 2012, Chevrolet celebrated its 60th year of Corvette production — and Corvette Racing carries on the racing tradition started over a century ago.

Today, Corvette Racing is carrying on the tradition set out by Chevrolet. The team runs in the GT class of the American Le Mans Series — the premier production-based category with twin Compuware Corvette C6.R race cars competing against showroom rivals from Ferrari, Porsche, BMW, Aston Martin, and Lotus.

The two-car team made its debut in February of 1999 in the Daytona 24-hour race and finished third and 12th. Since then, Corvette Racing has become one of the world’s most most successful and recognized production sports car teams, winning:

With the C6.R, the Corvette Racing program is continuing the tradition of racing production-based vehicles to “improve the breed”, according to Chevrolet. This is all thanks to the fact that General Motors, Chevrolet, and Corvette Racing recognize the vital importance of the exchange of information and the constant transfer of technology between the racing and production programs (unofficially known as track-to-street) that ensure that lessons learned on the track benefit every Corvette on the highway. This commitment has, in part, turned the Corvette into the world-recognized supercar it is today.