The Chevrolet Corvette C8 ZR1 is expected to arrive for the 2023 model year with a twin-turbo V8 engine, more aggressive looks, and more all-around capability than the C8 Z06, whether on the track or on the road. The ZR1 is expected to follow the C8 Stingray, C8 Z06, C8 Grand Sport, and C8 E-Ray variants as the fourth C8 model variant. It is expected to be followed by the C8 Zora.

While the “base” C8 Stingray is a very capable machine meant as an all-around performer and the C8 Z06 will be aimed at dominating at the track, the C8 ZR1 will be aimed at ultra high performance both on the road and at the track. It will be powered by a twin-turbo version of the 5.5L V8 DOHC engine found in the C8 Z06. The engine is expected to produce around 850 horsepower and 850 pound-feet of torque.

No photos of the Corvette C8 ZR1 are currently available. We will update this section one we get the very first spy shots.

GM Authority expects the Corvette C8 ZR1 to be powered by a twin-turbo 5.5L V8 LT7 engine. The motor is expected to feature a Dual OverHead Cam (DOHC) configuration with 32 valves.

Horsepower is expected to be around 700, while torque should land around 850 pound-feet. The LT7 will have a lower redline and flatter power curve compared to its naturally-aspirated version in the C8 Z06. 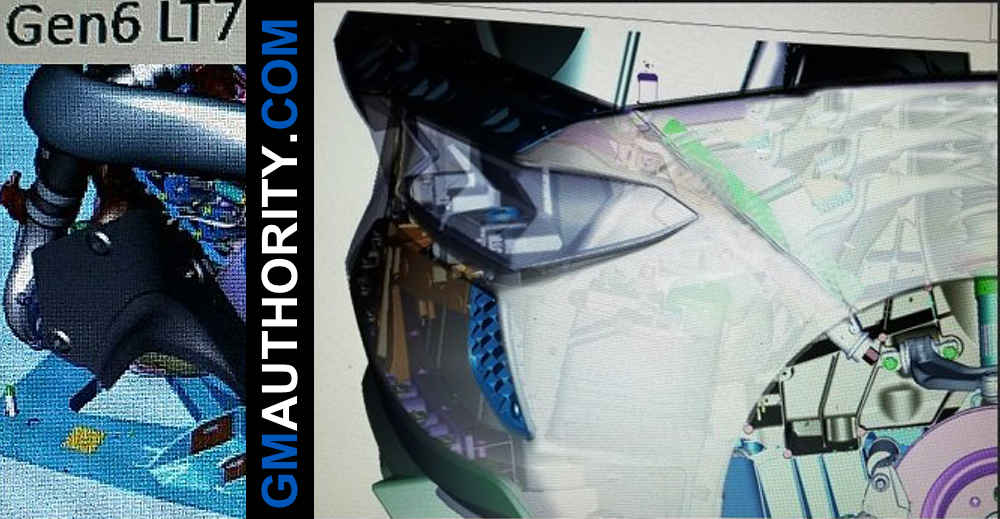 Shifting duties in the C8 ZR1 will be handled by the same eight-speed, dual-clutch automatic transmission as in the C8 Stingray and Z06, though it might have stronger internals to handle the higher power and torque. A manual transmission will not be offered. Power will be sent to the rear wheels.

Co-developed with TREMEC, the dual-clutch automatic delivers lightning-fast shifts and incredible power transfer in the Stingray model, and we have no reason to believe that this will change for the ZR1 C8 variant. The transmission was designed to provide drivers with the best of both worlds: the spirited feel and direct connection associated with a manual as well as the premium driving comfort of an automatic. The double-paddle de-clutch feature allows the driver to disconnect the clutch by holding both paddles for more manual control, in addition to choosing a specific gear. This enables the drive to perform a free-rev, if and when desired.

We expect the C8 ZR1 to feature an upgraded chassis compared to the Stingray and Z06 models, building on the already-capable configuration in the C8 Stingray.

Larger, more capable brakes will also be part of the ZR1’s upgraded chassis. An optional package will offer rotors made of an “exotic material,” but it will also come at a price.

Sources also told us to expect several “surprises” in this area, so expect we shall.

Specific performance figures for the Corvette C8 ZR1 are not available, but we do expect it to best the performance of the C8 Corvette Stingray and C8 Z06 in every aspect.

We expect a 0-60 mph time close to the two seconds mark, the ability to handle well over 1 lateral G on the skidpad, while delivering even better stopping performance than the C8 Stingray. The superior balance of the mid-engine configuration will aid in achieving higher levels of performance, as the mid-engine layout maximizes traction and enables more power to be put to the pavement compared to a front-engine, rear-drive setup.

The exterior will feature a “wide body” design, with flared fenders front and back to accommodate larger wheels and tires, bigger brakes and more capable powertrain cooling.

Expect active aerodynamics on the C8 ZR1, with an active spoiler and potentially an active aero system at the front end. Additionally, various lightweighting components will also be used to reduce the weight of this twin-turbo best.

We expect the Corvette C8 ZR1 to be available in two body styles: a two-door coupe (with a removable hard top panel) and a hard-top convertible.

Inside, don’t expect the Corvette C8 ZR1 to stray too far from the world-class cabin of the C8 Stingray. The same general cockpit is expected, with ZR1 badges and a few unique accents.

Moreover, an “exclusive” seating and insert material could make an appearance, while seats will be offered with a massaging function.

We expect the C8 ZR1 to become available late in the 2023 calendar year as a 2024 model year vehicle.

Like all other Corvette models, the C8 ZR1 will be assembled at the GM Bowling Green plant in Kentucky – home of the Corvette.

We expect the LT7 motor to be assembled at the adjacent Performance Build Center in Bowling Green, Kentucky.

The C8 ZR1 will be underpinned by the GM Y2 platform – the new mid-engine vehicle architecture that underpins all variants of the Corvette C8.

GM Global B will serve as the vehicle’s electrical system.

Pricing for the C8 ZR1 is currently unknown. However, GM Authority expects the MSRP to start at $115,000.

C8 ZR1 specifications currently not available. We will update this section once we have them.

The Corvette C8 ZR1 will be one of many C8 models variants. Other expected model variants include:

Discuss the Chevrolet Corvette C8 ZR1 in our Chevrolet forum.