The 4.2 liter V8 is an eight-cylinder, Dual-Overhead Cam (DOHC) gasoline engine produced by General Motors for use in Cadillac luxury vehicles. The engine, known internally as Blackwing and assigned GM RPO code LTA, is an all-new, clean-sheet engine design while also being Cadillac’s first-ever twin-turbo V-8 engine. The engine first launched in the 2019 Cadillac CT6.

“Designing an all-new engine was the best way to achieve the performance goals for the CT6 V-Sport,” said Jordan Lee, chief engineer of the Cadillac 4.2L Twin-Turbo V-8 LTA engine. “It builds on Cadillac’s well-established turbocharging know-how and forges new ground with innovative features that deliver exceptional performance and refinement.” 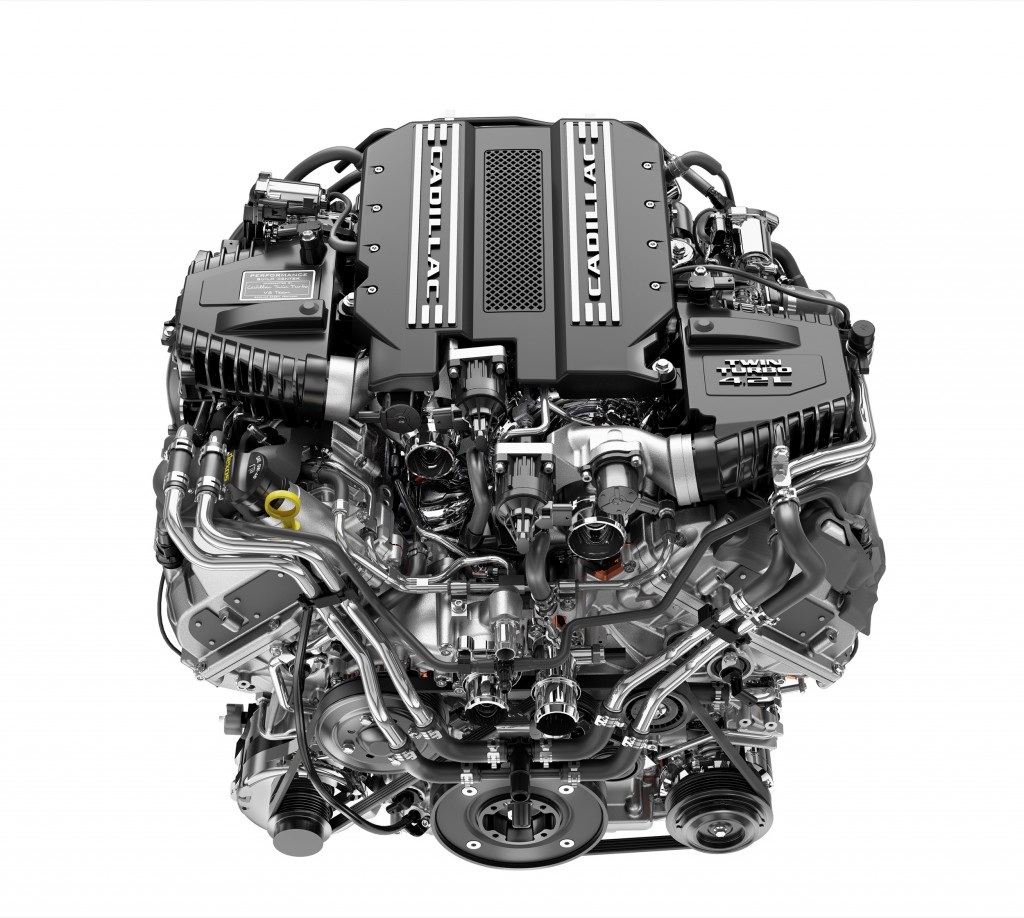 The Cadillac 4.2L Twin-Turbo V-8 is the first Dual Overhead Cam (DOHC) eight-cylinder engine from Cadillac and General Motors since the duo discontinued the Northstar V8 engine in 2010. Since then, all Cadillac and GM eight-cylinder engines were designed using the Overhead Valve (OHV) configuration otherwise known as a “push-rod” that’s been the a key characteristic of GM Small Block engines since their introduction decades ago.

It is believed that Cadillac and GM used a Dual Overhead Cam design for the LTA for two specific reasons, despite the overhead valve design that GM has perfected over the years being highly effective:

It’s also worth noting that DOHC engines are more powerful than overhead valve engines from a displacement standpoint, though exceptions to this rule do exist. For instance, a 4.2L DOHC motor will likely be more powerful than a 4.2L OHV motor. But despite its more efficient use of displacement, the physical size of a DOHC engine is typically larger than that of an OHV engine, since the DOHC configuration is taller due to the placement of the cams above the valves.

At the center of the Cadillac 4.2L Twin Turbo V-8 engine is a “hot V” configuration that transposes the conventional layout of the cylinder heads’ intake and exhaust systems to mount the turbochargers at the top of the engine – in the valley between the heads – to virtually eliminate turbo lag and reduce the engine’s overall packaging size.

In a conventional turbocharged engine, the cylinder heads receive the pressurized air charge through ports at the top of the engine and the exhaust exits through ports on the lower outside of the heads into manifolds connected to the turbochargers. In Cadillac’s innovative hot V design, the intake-charged air enters through the lower outside of the heads and exits through the top inside – where the turbochargers are integrated with the exhaust manifolds. This results in a quick spool-up, translating into more immediate power delivery. The design also enables closer mounting of the catalytic converters, for efficient packaging. 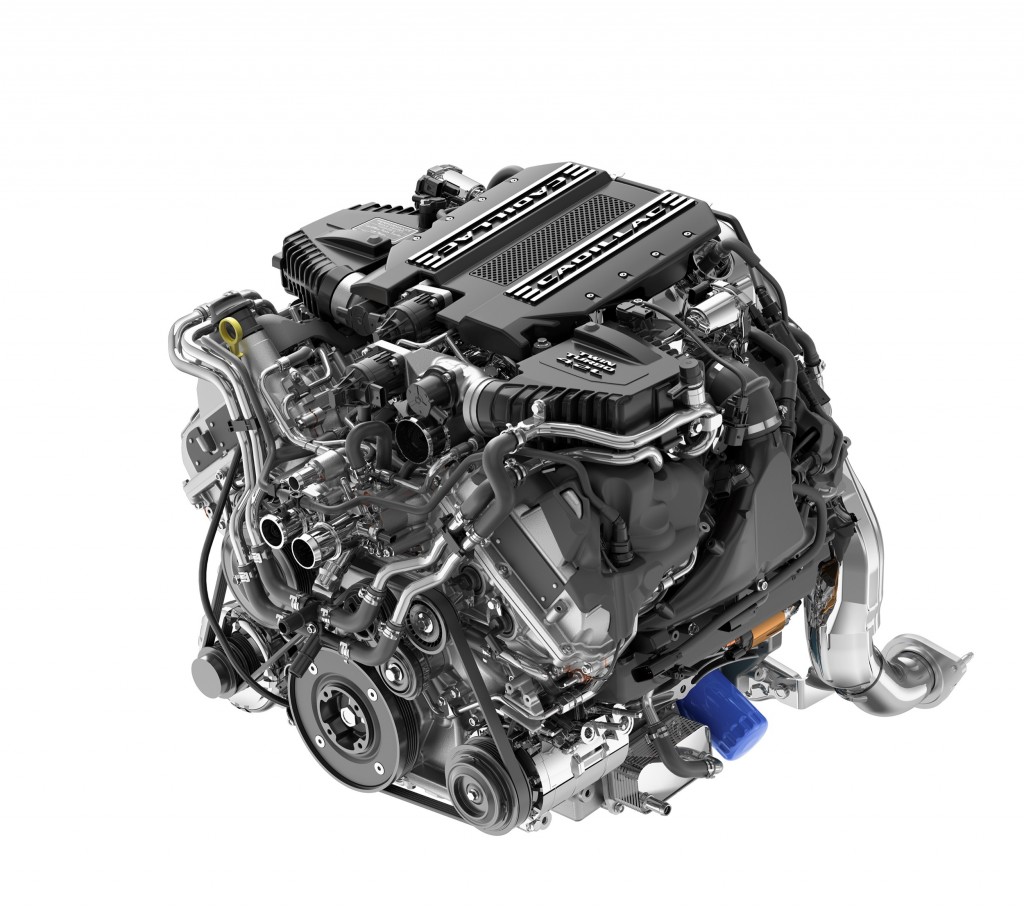 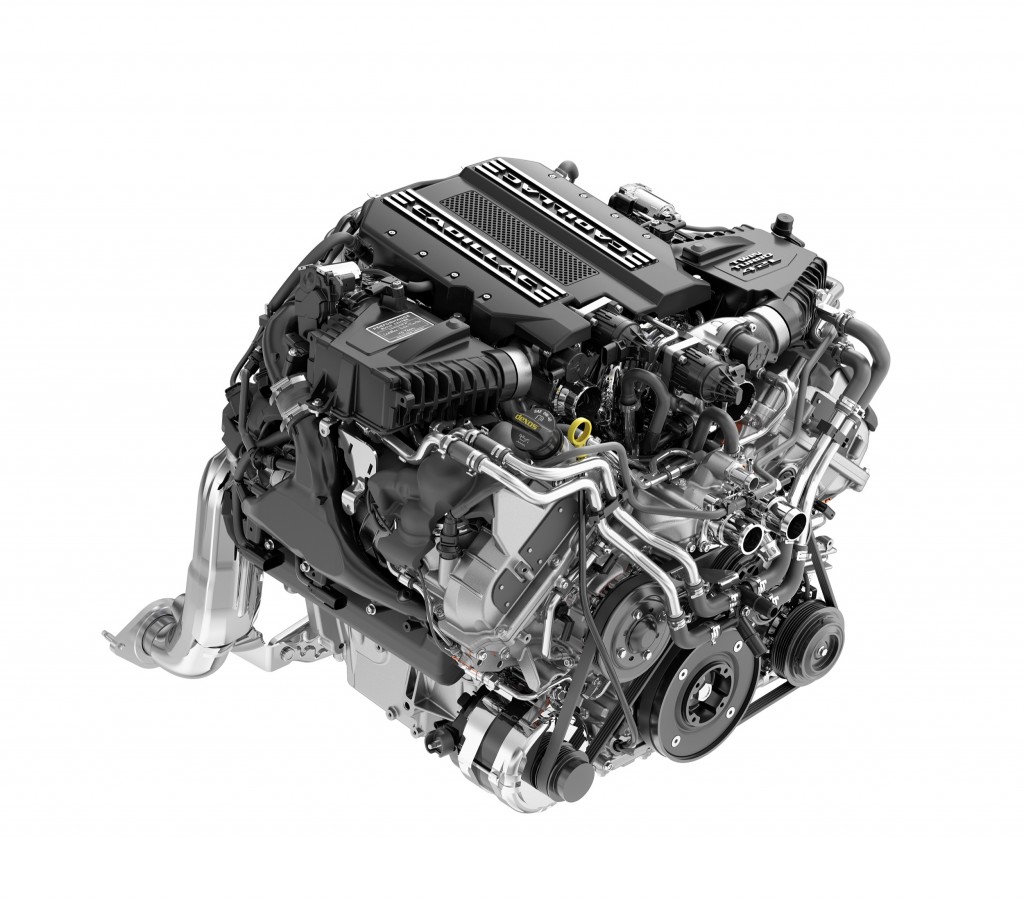 The engine’s comparatively small bore dimension enables the reduction in the size and weight of the pistons, optimizing the engine’s geometry to match the fast-rev capability permitted by the engine’s low-inertia, twin-scroll turbochargers. The result is exceptional responsiveness and immediacy of power across the rpm band.

The turbochargers produce up to 20 pounds of boost (1.38 bar) and are matched with electronic wastegate control for more precise boost management and more responsive torque production. In fact, 90 percent of the engine’s peak torque is available at only 2000 rpm, and it is carried through 5200 rpm for a confident, virtually bottomless power reserve.

The turbos’ twin-scroll design broadens their performance capability, offering quicker response and greater efficiency. Instead of a single spiral chamber (scroll) feeding exhaust gas from the exhaust manifold to drive the turbine on each turbocharger, the engine’s twin-scroll design has a divided housing with two exhaust gas inlets and two nozzles to drive the turbine. Generally, one of the nozzles contributes to quicker response and boost production, while the other contributes to overall peak performance.

Each of the engine’s integrated exhaust manifolds/turbocharger housings splits the exhaust channels from the cylinder head so the exhaust flows through separate scrolls based on the engine’s exhaust pulses. When matched with precise valve timing, that separation leverages exhaust-scavenging techniques to optimize gas flow, improves turbine efficiency and reduces turbo lag.

The electronically controlled wastegates – one per turbocharger – are used for more precise management of the engine’s boost pressure and subsequent torque response for smoother, more consistent performance. They are independently controlled on each cylinder bank to balance the turbo compressors’ output, for greater boost pressure response.

An efficient water-to-air charge-cooling system contributes to the engine’s performance, enhancing the turbochargers’ effectiveness. Similar in concept to an engine’s radiator, the system’s intercoolers cool the boosted air charge before it enters the cylinders. Cooler air is denser, which means there is more oxygen in a given volume, resulting in optimal combustion and resulting more power.

The system on Cadillac’s 4.2L Twin-Turbo V-8 LTA engine features a pair of heat exchangers located above the valley-mounted exhaust manifold/turbocharger housings. The turbos pump pressurized air directly through the heat exchangers and into the cylinder heads. The heat exchangers are cooled by their own coolant circuit.

The intercoolers lower the air charge temperature by more than 130 degrees F (74 C), packing the combustion chambers with cooler, denser air. Also, the system achieves more than 80 percent cooling efficiency with only about 1 psi (7 kPa) flow restriction at peak power, which contributes to fast torque production.

Before entering the combustion chambers, the cooled air charge flows through a pair of throttle bodies, one for each engine bank. Each electronically-controlled throttle body has a 59mm diameter opening.

The Cadillac 4.2L Twin-Turbo V-8 LTA engine will be available in two versions:

The engine will likely be used in other Cadillac vehicles in various forms of tune, including the Cadillac CT4, Cadillac CT5, and the production version of the Cadillac Escala concept.

Each Cadillac 4.2L TT V-8 DOHC LTA engine will be hand-built at the Performance Build Center at the GM Bowling Green, Kentucky facility.

Cadillac has stated several times in its announcements that the Twin Turbo V-8 LTA will be exclusive to Cadillac vehicles. Cadillac officials have also stated the same in direct communication with GM Authority.

However, it could be possible that other GM vehicles will use variants of the engine with different tunes, such as the mid-engine Corvette. Doing so would keep the LTA “exclusive” to Cadillac, while allowing other models to benefit from the motor’s overall architecture.

It’s very likely that the LTA Blackwing will be used in other Cadillac vehicles in various forms of tune, including the ultra-high-performance version of the Cadillac CT5.

The Cadillac 4.2L Twin-Turbo V-8 LTA engine was announced on March 21st, 2018 in conjunction with the 2019 Cadillac CT6, which received a refresh (also known as a fafelift, midcycle enhancement/MCE) for the 2019 model year.