The concept is configured as a mobile lounge with a single door that opens up the side of the vehicle to allow cabin access. It is filled to the brim with technology that delivers ultimate comfort and entertainment for a small party to enjoy on the way to their destination.

The SocialSpace has no need for human input or a driver’s area, allowing designers to make use of its spacious cabin to place comfortable wraparound bench seats. Cadillac describes it as being a “mobile living room configured for maximum comfort and enhanced customer experience.” 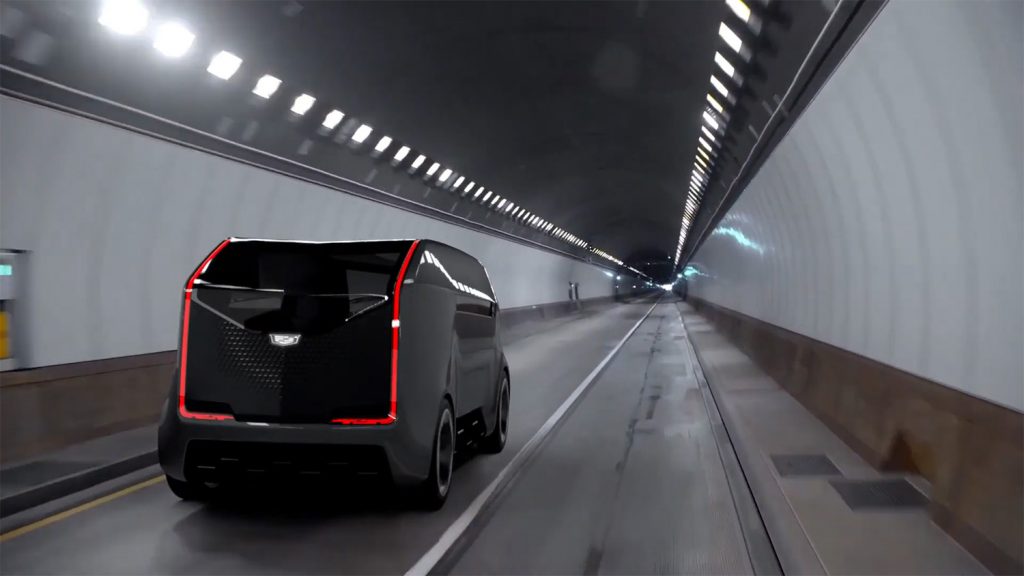 The imminence of battery-electric vehicles, along with the rising demand for self-driving technology, represents the dawn of a new age in the automotive industry and a fundamental change to the relationship between people and cars. The Cadillac SocialSpace was designed with this in mind, acting as a sanctuary for people to relax and recharge on their way to an event, an airport, a gathering of close friends, a business meeting, or another engagement. The SocialSpace itself is as much a destination as it is as method of travel.

The Cadillac SocialSpace features a minimalistic, boxy design that reflects its focus on passenger comfort rather than aerodynamics. It looks to be about the same size as a large SUV, with a high roofline that’s a little taller than that of the average person.

The large self-driving robotaxi takes Cadillac’s iconic vertical lighting signatures to the extreme, with bright strips of “headlights” lining the angled front fascia, all the way from the roof down to the front bumper. The red taillights follow a similar pattern that brackets the edges of the vehicle’s rear. Both the front and rear lighting displays illuminate with a friendly greeting pattern similar to the welcome signature seen on the 2023 Cadillac Lyriq. 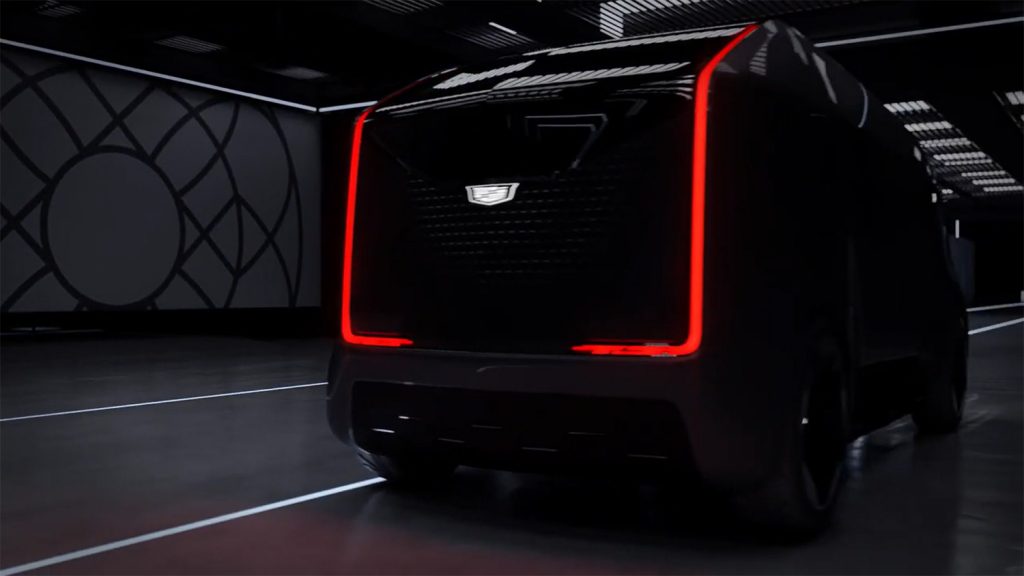 Michael Simcoe, Vice President of GM Global Design, says that the vertical light signatures of the Personal Autonomous Vehicle “are choreographed to greet and draw passengers inside.”

The SocialSpace also features the new monochromatic Cadillac logos, which lend themselves well to the prominent white backlighting behind the crest. The badge is easily identifiable against the dark background of the front and rear fascias of the SocialSpace. 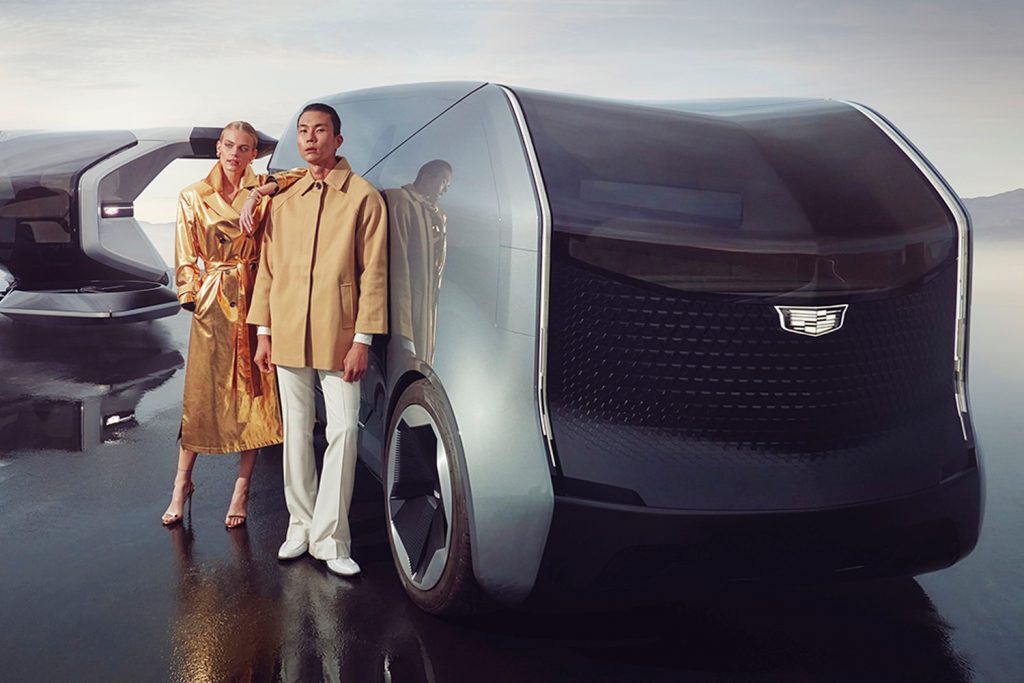 Looking closely at the glossy black panels on both the front and rear of the SocialSpace reveals a cross-woven pattern reminiscent of a grille pattern on a vehicle with an internal combustion engine. It’s unclear if this design serves any purpose other than aesthetics, but even if that’s all it does, it’s a great nod to Cadillac grilles of the past. 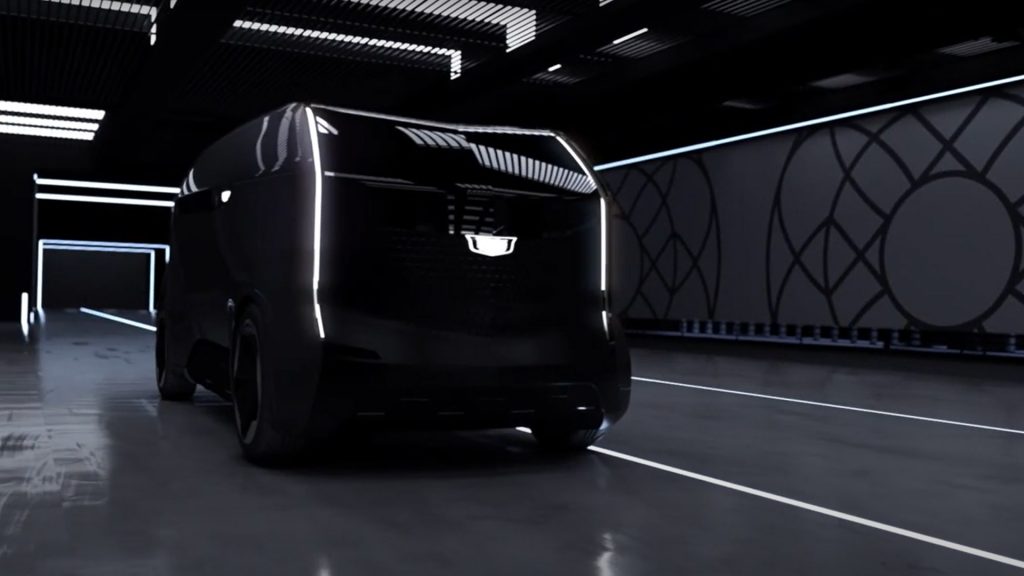 The SocialSpace does not place an emphasis on a wide, windowed greenhouse. Its construction is solid save for the panoramic glass roof, effectively removing much of the distracting environment from the passengers’ experience. The thin black windows set into the sides of the vehicle not only complement its stark body lines, but also allow glimpses of the world outside while limiting visibility into the vehicle’s interior, creating a sense of privacy.

The wheels feature a minimalistic design as well, and appear to feature either hidden lugnuts or a centerlock wheel with a single lug in the center. 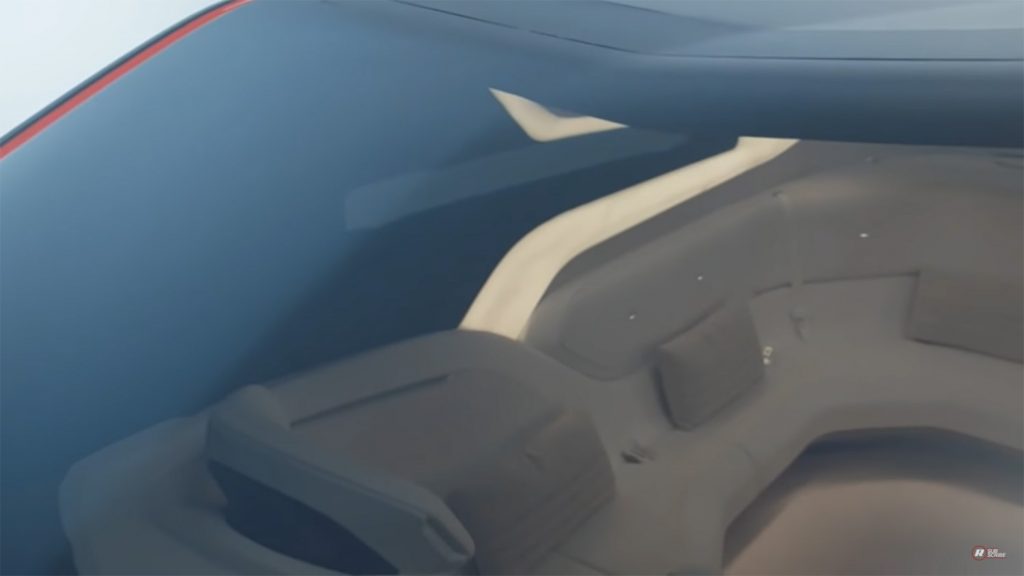 The Cadillac SocialSpace is packed with the very latest and greatest, designed with passenger comfort in mind. It features an onboard AI with voice recognition. Passengers can call out to the AI assistant to adjust system settings like climate control. These settings can also be accessed by using hand gestures that the AI will pick up and translate accordingly.

Perhaps the most interesting aspect of the Cadillac SocialSpace is its extensive array of biometric sensors that read its passengers’ vital signs. The SocialSpace processes this information and uses it adjust various interior aspects, such as humidity, lighting, ambient noise, and even cabin scent for aromatherapy. 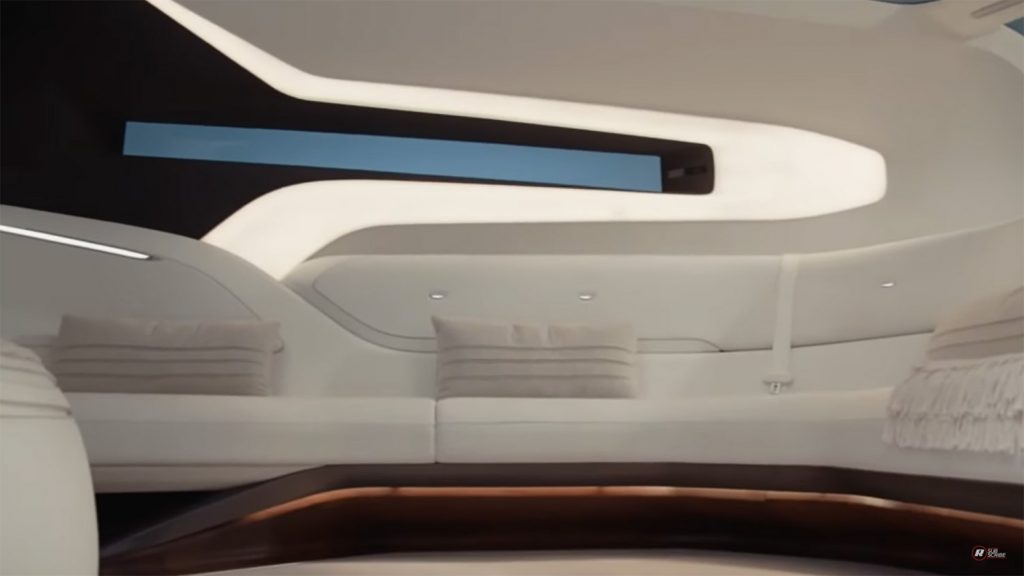 Placed in a convenient location between the seats is a holographic touch-pad interface. This display appears to show the vehicle’s set route. Additionally, there is a widescreen display positioned behind the seating area that shows the current weather, time, date, travel time duration, and other relevant information. Perhaps this screen can also show augmented reality overlays to enhance the ride, much like the two-seated Cadillac InnerSpace does with its forward-mounted panoramic LED display. There’s also an interior camera that can be manipulated to get every passenger in view and take a selfie on the way to the destination. We imagine that the technology would also be capable of doing a video call.

The Cadillac SocialSpace uses the Ultium battery technology and makes use of several battery packs for a long, power-efficient ride.

The Cadillac SocialSpace’s name speaks to its main purpose: to provide a social space for a small party of people. That’s why its windows are situated to the front and rear of the vehicle, a conscious design choice.

“This is a design concept that provides a special space for a group of friends or family to spend time together on their way to a destination,” says Simcoe. “The expansive glass roof keeps the group connected to the outside, but encourages eyes to turn inside to focus on one another and personal well-being.”

This is further emphasized by the wraparound bench seats, which put passengers within eyeshot of one another at all times to encourage conversation and camaraderie. There also appear to be two traditional captain’s chairs that recline and swivel at the front of the vehicle.

The interior is furnished in dark wood and light leather along with soft, comforting lighting accents, lending it the rich, opulent feel expected of a Cadillac. The high roof and sweeping interior design give it a lofty, spacious interior, truly earning the SocialSpace the title of “mobile living room.”

The Cadillac SocialSpace was unveiled at the 2021 Consumer Electronics Show, where it was initially called the Cadillac Personal Autonomous Vehicle or PAV. At the 2022 CES show, GM began to use the “SocialSpace” moniker to refer to the concept. The SocialSpace was revealed by way of a virtual exhibit, since a physical version of the vehicle has not yet been built.

The Cadillac SocialSpace is part of the Cadillac Halo Concept Portfolio of autonomous concept vehicles. Besides the SocialSpace Concept, the portfolio also includes:

The Cadillac SocialSpace concept was featured in GM’s ad spot titled “Dr. EV-il,” which premiered during Super Bowl LVI in February 2022. In the ad, Dr. Evil from Austin Powers takes over GM Headquarters and plots world domination using the newfound Ultium technology. However, he discovers that he is not the number one threat to the world anymore. Instead, that title now belongs to climate change.

From left to right: Cadillac InnerSpace, Chevy Silverado EV, GMC Hummer pickup EV, Cadillac Lyriq, BrightDrop EV600, Cadillac PersonalSpace. The SocialSpace is parked behind this lineup, between the Hummer and the Lyriq.

The SocialSpace can be seen in the garage scene, parked behind a lineup of other GM electric vehicles including the Cadillac Lyriq, Chevrolet Silverado EV, GMC Hummer pickup EV, and the BrightDrop EV600.

Discuss the Cadillac SocialSpace Concept in our Cadillac forum.