The Cadillac PersonalSpace Concept is a conceptual single-seat, fully electric, autonomous aircraft. It was initially introduced as the Cadillac Vertical Take-Off and Landing (VTOL) concept. It is designed to transport a single passenger above road-bound traffic from roof to roof, making travel within a city much simpler and faster. The concept could be particularly useful for a businessperson who needs to quickly and efficiently traverse an urban environment in order to make it to a meeting or other engagement across town in a timely manner.

“The vertical take-off and landing drone, or VTOL, is GM’s first foray into aerial mobility,” said Michael Simcoe, vice president of global design at GM. “We are preparing for a world where advancements in electric and autonomous technology make personal air travel possible. It is a concept designed for the moment when time is of essence and convenience is everything you’ve been at the office and now you need to get to a meeting across town.”

A Future of Personal Air Travel

The Cadillac PersonalSpace concept embodies GM’s mission statement of creating a future with zero crashes, zero emissions, and zero traffic congestion. The PersonalSpace represents the potential to open up the skies as a new frontier for short-range travel, and even provide a quiet moment of solace between destinations for its passenger. If the passenger does not have to focus on navigating through traffic on city streets, which can be extremely frustrating and stressful, they can use that time to prepare themselves for their next engagement, or to simply relax and collect their thoughts before they get there.

“It is a vehicle designed for when time is of essence,” said a GM spokesperson during the PersonalSpace’s reveal, “and convenience is everything.”

The first thing the casual observer may notice is that the Cadillac PersonalSpace concept’s exterior resembles that of a drone. It has four rotors – two mounted at the base of the cabin and two at the top – to provide a balanced and comfortable ride. The concept features a sleek and aerodynamic design, with the front comprised of a single glass panel that grants a full view of the world around it to its passenger so they can watch the road-bound traffic far below. The passenger is able to enter the Cadillac PersonalSpace concept via a side door that swings open to allow comfortable entry.

The PersonalSpace appears nimble, with a small carriage capable of performing quick maneuvers midair if necessary. This is particularly useful for navigating through the narrow spaces between tall buildings, and to allow for tight cornering without losing speed in the air.

The VTOL concept has smooth but straight edges, perfect for slicing through the air and minimizing turbulence and drag, therefore maximizing the power of its battery packs. Its chassis is lightweight, with a fuselage made of carbon fiber. It also has vertical exterior marker lights, a Cadillac lighting and exterior design signature, to help identify its position in a dark environment.

The Cadillac PersonalSpace has a Head-Up Display (HUD) on the inside of its glass panel that shows relevant information to the trip. Specifically, it alerts its passenger to its takeoff and landing procedures, and notifies them when they are close to their destination so they can prepare to disembark the machine prior to actually landing.

The interior HUD may also lend itself to some form of augmented reality in a way similar to the Cadillac InnerSpace concept. This display could present information about environmental factors, such as ambient exterior temperature and weather information, along with a message that could inform the passenger about estimated time remaining in the trip.

The flying machine concept is governed by an autonomous AI-controlled biometric user interface. This indicates that the passenger will retain at least some control over certain aspects of the trip in-flight, likely pertaining to cabin comfort features. The PersonalSpace will also have the ability to communicate over-the-air with other flying vehicles to prevent midair collisions or other catastrophes.

GM indicates that the VTOL Concept is powered by a 90 kW lithium ion battery pack. Four ducted propellers are governed by four individual electric motors to facilitate flight, while tricycle retractable landing gear legs make for a comfortable touchdown in designated landing pads. The PersonalSpace is capable of flight speeds up to 56 mph (90 kmh).

The Cadillac PersonalSpace Concept features a single, cushy seat furnishing its interior. The seat rotates outward to accept the passenger once they enter the PersonalSpace, similar to the rotating seats featured in the InnerSpace concept. The seat then swivels forward when the door is shut. Once the doors close, the passenger is immediately enclosed in a small cabin that feels secure and solid. 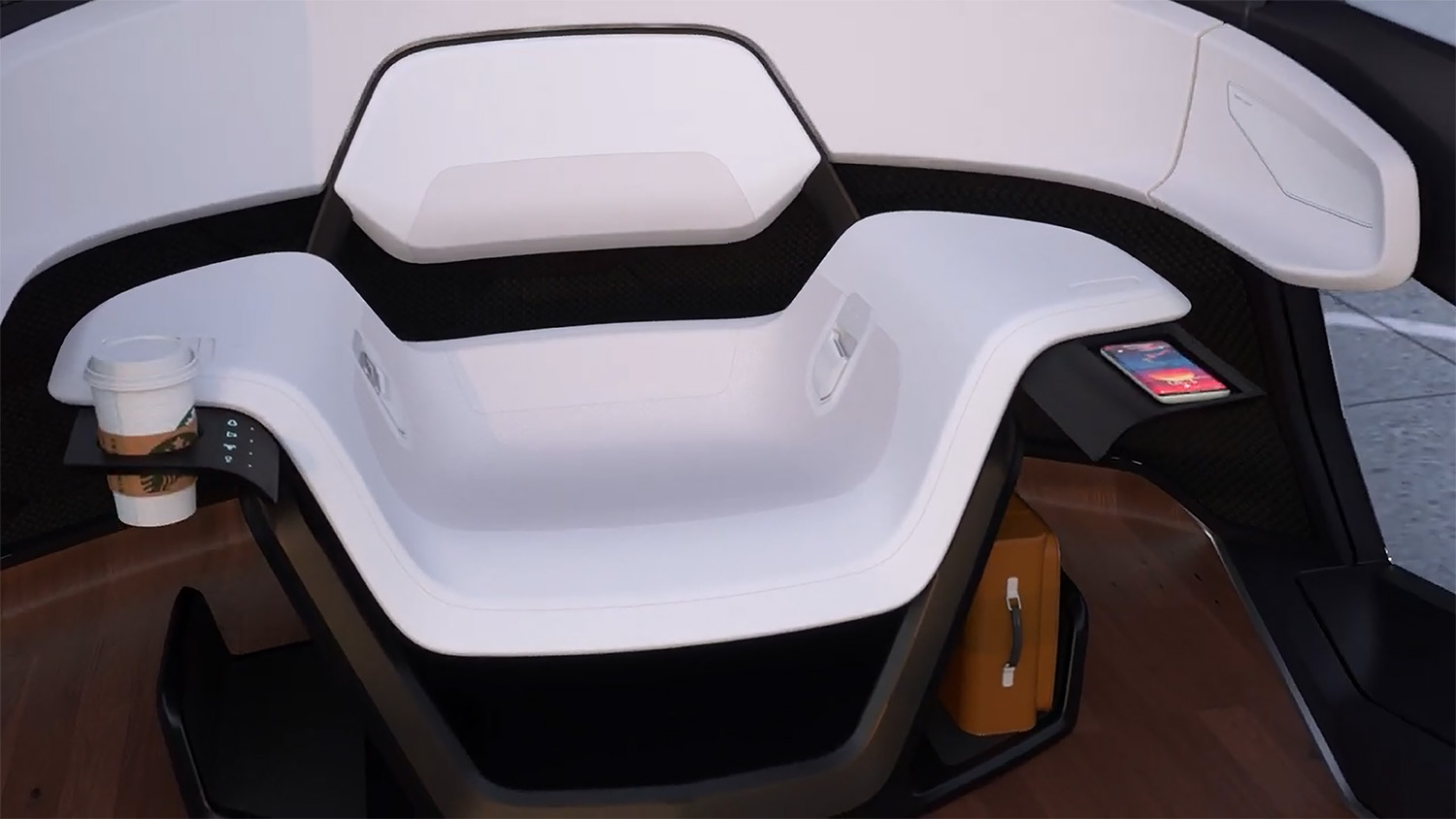 A light-hued material is used on the seat to lend a contemporary, sleek feel to the personal flying machine’s cabin. The armrests of the seats have amenities such as a cupholder and a smartphone holder, along with biometrically-controlled tablet to control vehicle settings. There are buckles visible, indicating that a seatbelt will be used to protect the passenger during transportation.

Once the door is closed, the sound of the rotors is minimized, becoming an almost lulling drone. The passenger can sit back, relax, and enjoy the view as the PersonalSpace handles the rest.

The Cadillac PersonalSpace was revealed at the 2021 Consumer Electronics Show, where it was initially branded as Cadillac VTOL. At CES 2022, the luxury marque began to use the name “PersonalSpace” in order to fit with the naming convention of the other futuristic Cadillac vehicles occupying the Cadillac Halo Concept Portfolio. Since the concept has not physically been built, the PersonalSpace was introduced via a virtual exhibit.

The Cadillac PersonalSpace concept was featured in GM’s “Dr. EV-il” ad which premiered during Super Bowl LVI in February 2022. In the ad, Dr. Evil from Austin Powers takes over GM Headquarters at the Renaissance Center and plots world domination using the newfound Ultium battery technology. However, he discovers that he is not the number one threat to the world anymore. Instead, that title now belongs to climate change.

The PersonalSpace makes an appearance inside the garage area of Dr. Evil’s new complex, where it is seen hovering to the far right of the lineup of vehicles. The PersonalSpace is joined by the other three aforementioned vehicles in Cadillac’s Halo Concept Portfolio, along with other GM electric vehicles – the Cadillac Lyriq, Chevrolet Silverado EV, GMC Hummer pickup EV, and the BrightDrop EV600.

Discuss the Cadillac PersonalSpace Concept in our Cadillac forum.