The Cadillac OpenSpace Concept is an autonomous electric luxury concept vehicle. It appears to be large enough to accommodate living quarters inside, indicating that it might be a self-driving recreational vehicle or camper. Its purpose is to open up the environment to its passengers, allowing them to appreciate the world around them during travel while partaking in unparalleled luxury, technology and comfort.

Travel As An Art

The Cadillac OpenSpace Concept is fully autonomous and has no need for human input, meaning passengers are free to move about its spacious interior. The autonomous electric vehicle furthers Cadillac’s pursuit to deliver zero crashes, zero emissions, and zero traffic congestion. It streamlines and perfects the way people travel while maintaining exemplary exterior and interior styling.

Though GM has not yet revealed the Cadillac OpenSpace concept vehicle in full, there have been several images and snippets of video released to provide a basic idea of the concept’s scale and design.

A brief shot of the OpenSpace’s exterior showcases large, sweeping glass panels that make up the sides of the concept. The concept appears to accommodate multiple levels, with stairs visible behind the tinted glass. It’s not clear if the stairs lead to another story contained inside the vehicle itself, or if they lead to a hatch that allows access to the roof. However, the presence of stairs indicates that the vehicle has a large footprint.

The concept seems to feature a boxy exterior design motif, similar to that of the six-passenger Cadillac SocialSpace concept.

GM designer Bryan Nesbitt mentions that the Cadillac OpenSpace is “a virtual sanctuary,” indicating that the concept vehicle could play host to cutting-edge augmented reality (AR) technology. It’s not clear how such technology might be implemented, but perhaps it could entertain passengers on long journeys, or provide information pertaining to the vehicle’s current location, such as weather conditions.

As with the other vehicles in the Cadillac Halo Concept Portfolio, the OpenSpace is fully electric, and likely utilizes the GM Ultium battery architecture. 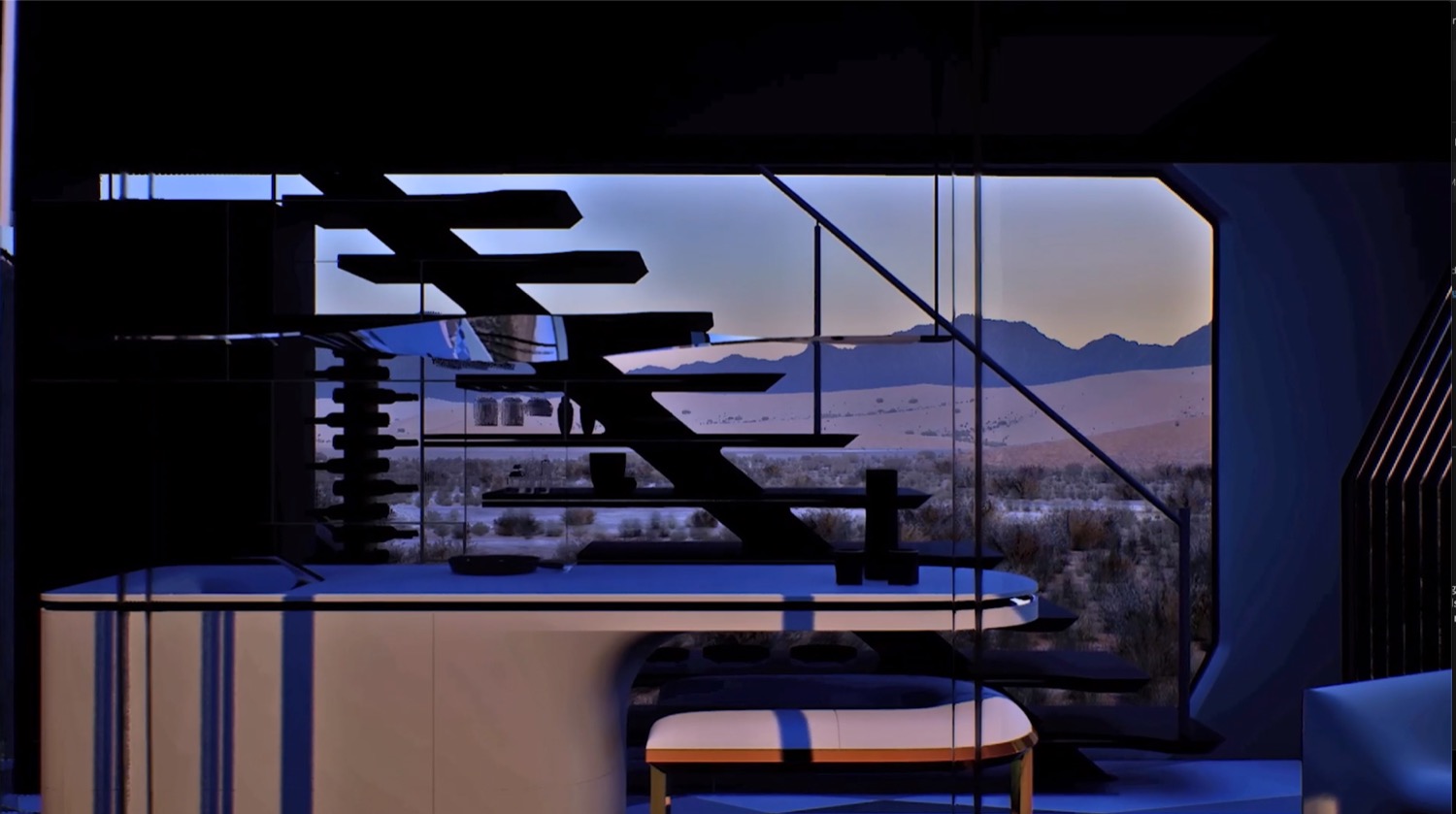 The interior of the Cadillac OpenSpace feels similar to that of an upscale luxury apartment or high-end hotel room, with contemporary design cues and soothing neutral colors. One image shows the previously-mentioned staircase situated behind a bar or kitchen countertop with a sink. There also appears to be some sort of stylized light fixture hanging above the counter, and perhaps even a refrigerator behind it. The wall behind the counter is largely made up of glass, giving a panoramic view of the scenery beyond.

Another image shows what looks to be a sitting area. It could be a separate dining room area or perhaps a different angle of the previously mentioned countertop. Again, this setting speaks to the concept’s scale, as it appears to be able to comfortably fit several people.

A final glimpse of the interior shows off a bed or cushioned seating area. It opens up to a glass wall that grants an almost unrestricted view of what lies ahead. The bed may be situated at the front of the vehicle, and looks large enough to fit at least two people comfortably. 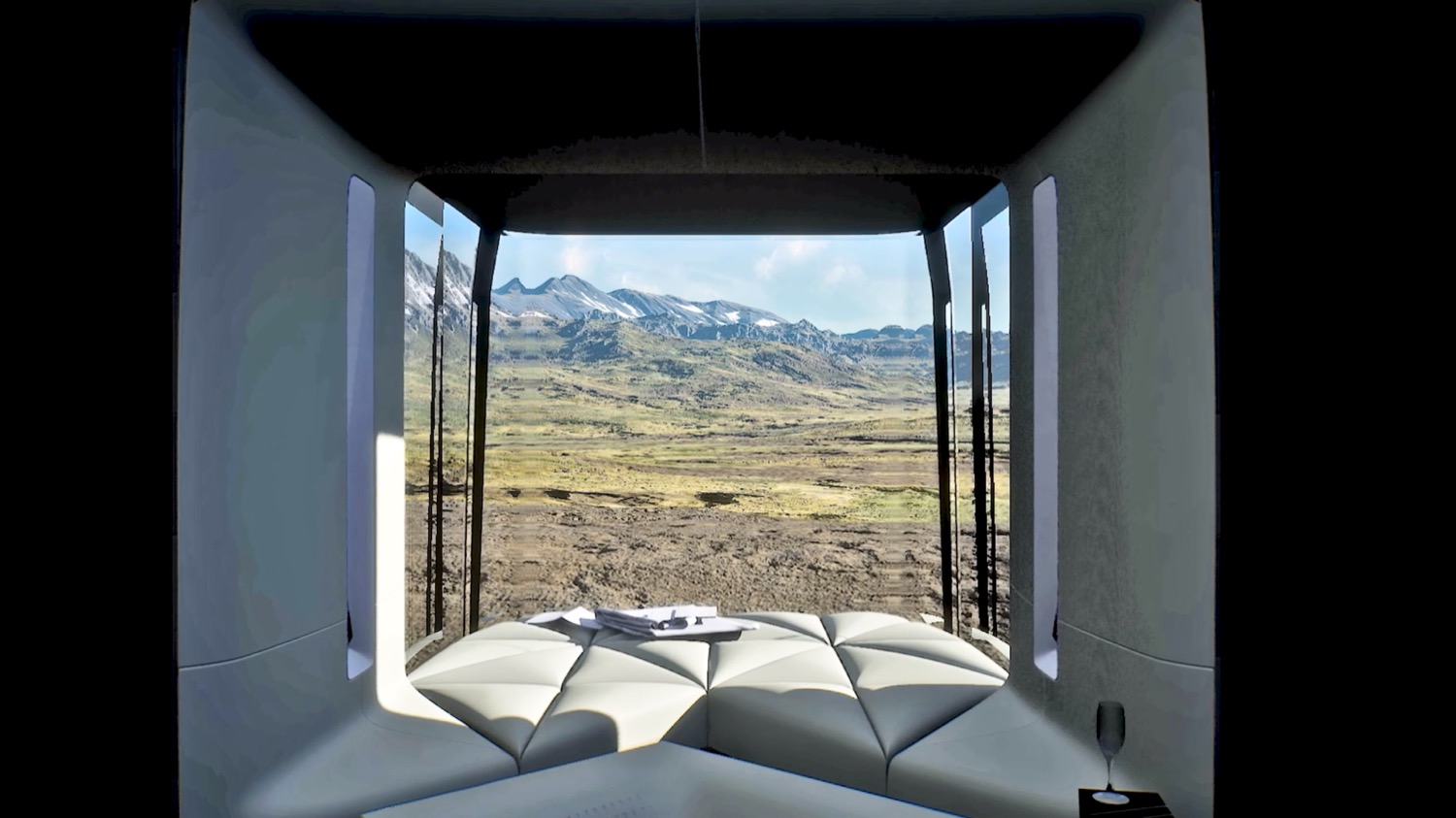 The attention to detail and comfort in the concept’s interior design demonstrates that the OpenSpace itself is a destination and not just a vessel for travel. Perhaps it is a recreational vehicle, or an upscale camper van; it may also serve as a mobile hotel room or even an apartment for long-term living. The concept vehicle’s nomadic nature is further emphasized by the variety of settings featured in the teaser images above.

As of this writing, the Cadillac OpenSpace concept has not been officially unveiled. However, GM teased it at the 2022 Consumer Electronic Show during the reveal of the Cadillac InnerSpace concept.

The Cadillac OpenSpace is part of the Cadillac Halo Concept Portfolio of autonomous concept vehicles. Besides the OpenSpace Concept, the portfolio also includes:

Discuss the Cadillac OpenSpace Concept in our Cadillac forum.