The Cadillac InnerSpace concept is a two-door, two-passenger electric autonomous luxury vehicle concept. It features a “dramatic” exterior design and is packed full of technologies that enhance passenger experience and comfort while delivering a luxurious self-driven ride. By eliminating the need for human input while driving, the Cadillac InnerSpace concept vehicle allows its two passengers to enjoy increased personal time and the ability to simply enjoy the journey instead of focusing on driving.

“The vehicles of the Cadillac Halo Concept Portfolio are designed to provide effortless travel through extraordinary means,” says Brian Nesbitt, GM Executive Director, Global Advanced Design and Global Architecture Studio. “They are visions for the next decade and beyond.”

Charging Into A Reimagined Future

Cadillac’s foray into the world of fully electric vehicles opens the door for a reimagined future for the luxury marque. Over a century ago, the Cadillac Runabout and Tonneau offered customers a way to explore new horizons in a personal, compact vehicle. The Cadillac InnerSpace was designed to carry that sentiment into the modern automotive scene by granting unparalleled freedom to its passengers with a fully autonomous driving experience.

“The vehicle’s fully autonomous capability means they could explore more of the world around them,” Cadillac said of the InnerSpace at its reveal. “More personal and tailored experiences… add new dimensions to Cadillac’s signature luxury experience.”

The advent of battery-electric vehicles, along with the rising proliferation of self-driving technology, represents the dawn of a new age in the automotive industry and a fundamental change to the relationship between people and their cars.

“We’re exploring where that will go with these innovative concepts,” said Nesbitt. “[We’re] giving customers more time instead of taking it.” 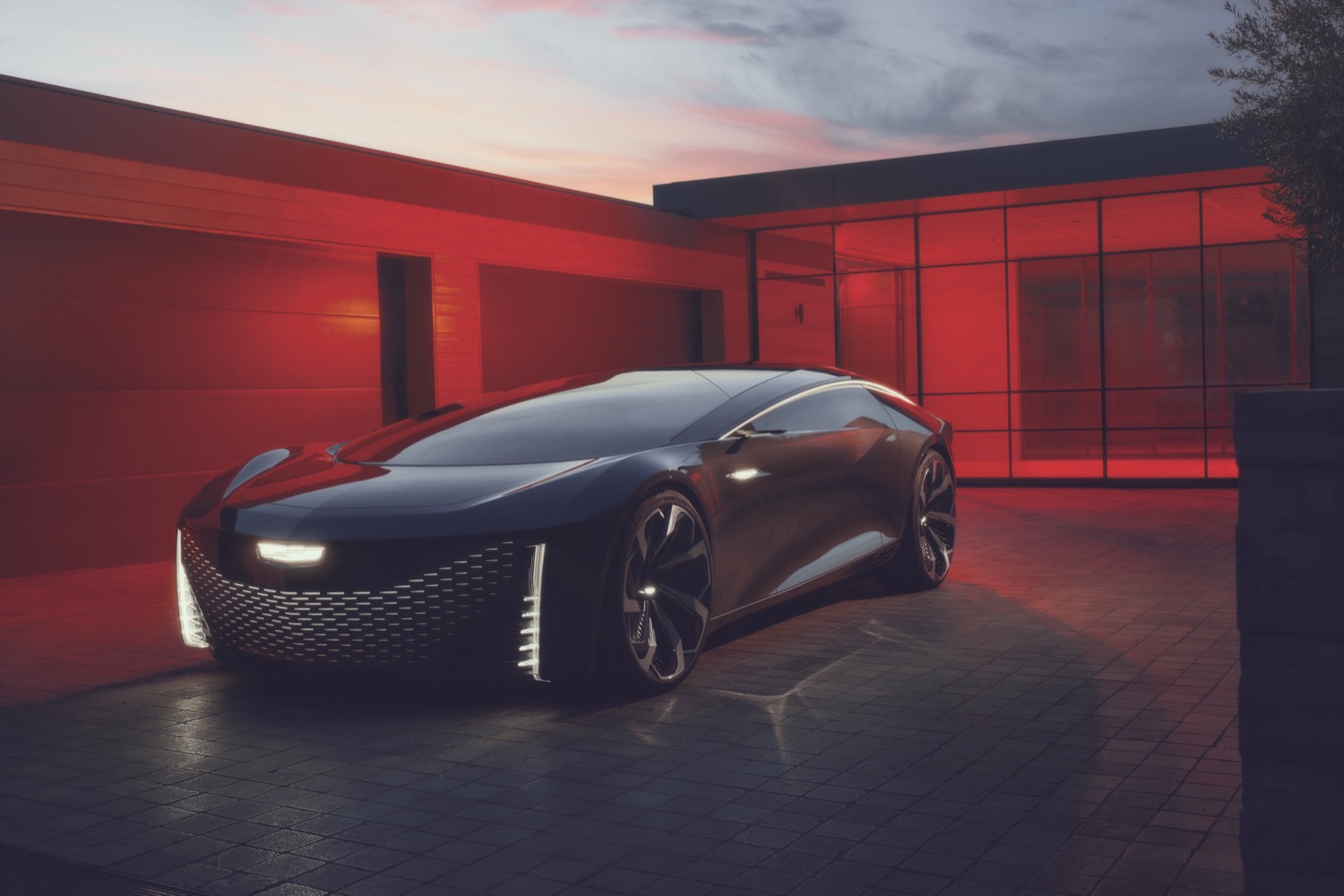 The Cadillac InnerSpace’s striking exterior design features a low-slung, two-door coupe body style with a sportscar-like poise. Its panoramic glass roof extends down to the sides of the vehicle, allowing for an unimpeded view of the world outside. The roof lifts upward as the doors wing outward to allow for maximum ease of entering and exiting the vehicle.

Its body lines are streamlined and sleek, presumably to maximize aerodynamic efficiency and therefore reduce the amount of power drawn from the batteries at speed. This is further emphasized by its bullet-like shape, which appears to be able to slice through the air while minimizing drag for a comfortable, quiet ride. 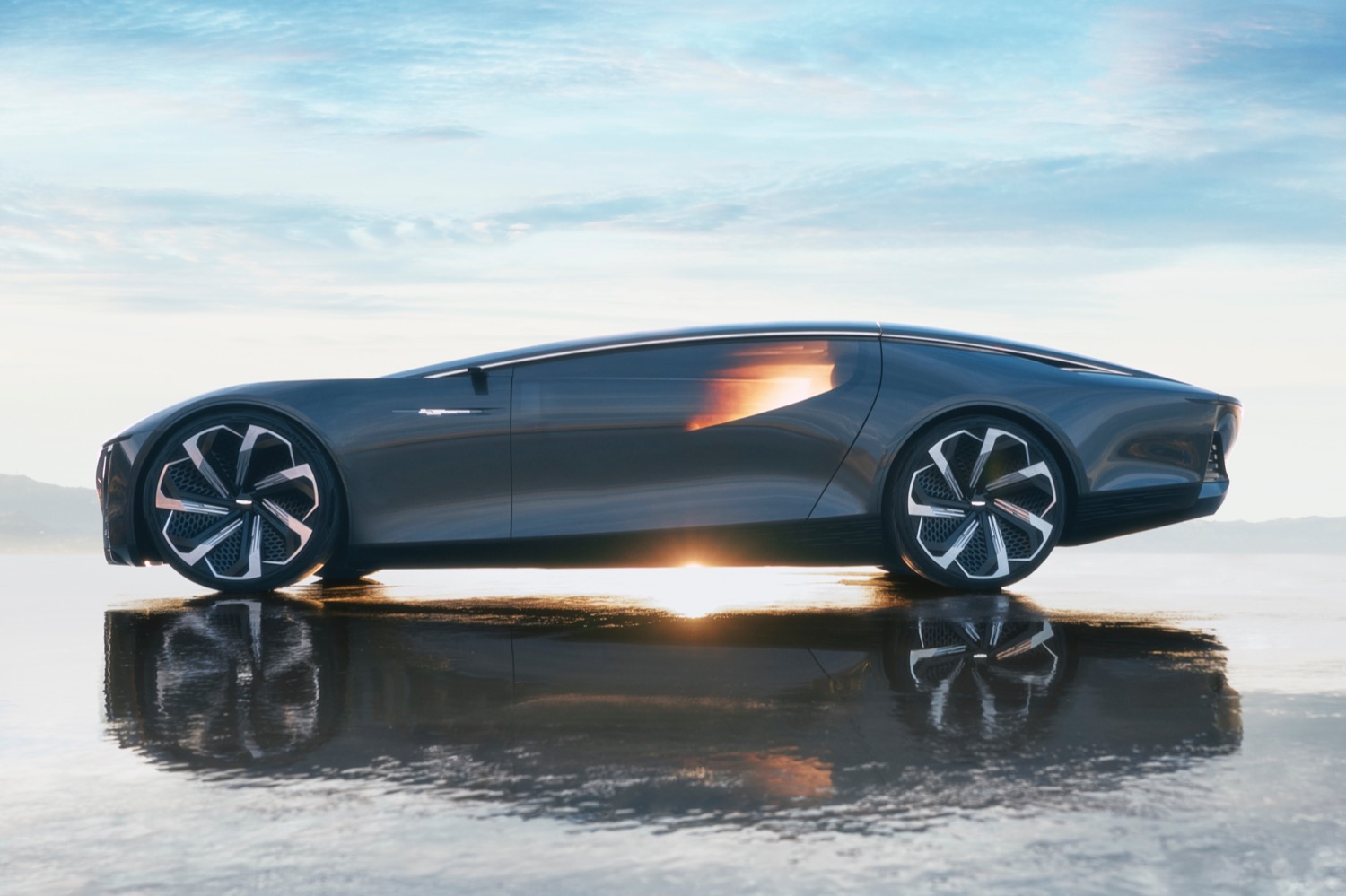 Since there is no need for open areas in the front grille for air intake, the InnerSpace implements a front fascia with an LED lighting display integrated within. The sides of the front fascia are bracketed by Cadillac’s iconic vertical lighting signatures that also serve as headlights. The LED display illuminates in a unique pattern that fills the front fascia before bleeding into strips of white light that follow the InnerSpace’s roof lines. The concept vehicle features the new monochromatic Cadillac crest at the point of its hood, which was designed to be complimented by white backlighting.

The front fascia’s lighting elements are similar to what is currently featured on the 2023 Cadillac Lyriq, suggesting that the arrangement will be a staple in the luxury marque’s electric vehicle design language. 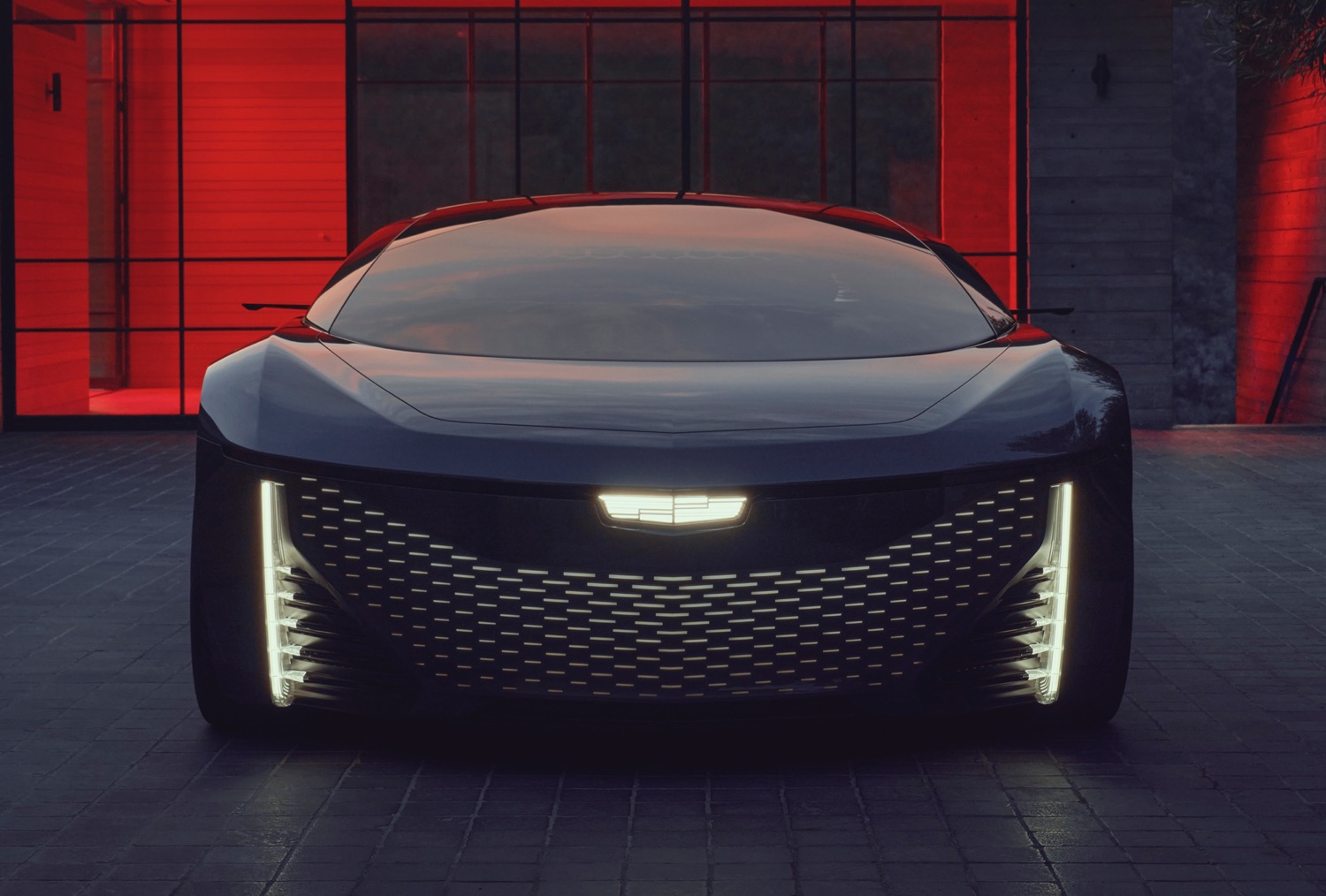 The InnerSpace concept vehicle rides on a set of Goodyear tires that were specifically designed to “contribute to its solace.” The tires feature SoundComfort technology that is designed to mitigate soundwave resonance within the tire, and therefore greatly reducing the sound of road noise carried into the cabin. Sustainable soybean oil and rice husk-based silica is used in place of traditional petroleum-based oil for the construction of the tires.

The Cadillac InnerSpace features an extensive array of cutting-edge technology to support not only its autonomous driving functionality, but to maximize passenger comfort and entertainment as well as battery power output. AI-driven biometric input and interfaces, accessible via the large, immersive, panoramic SMD LED display mounted where the windshield would be in a traditional vehicle, grant passengers the opportunity to choose between Augmented Reality Engagement, Entertainment or Wellness Recovery themes for their journey, depending on their preference at the time. 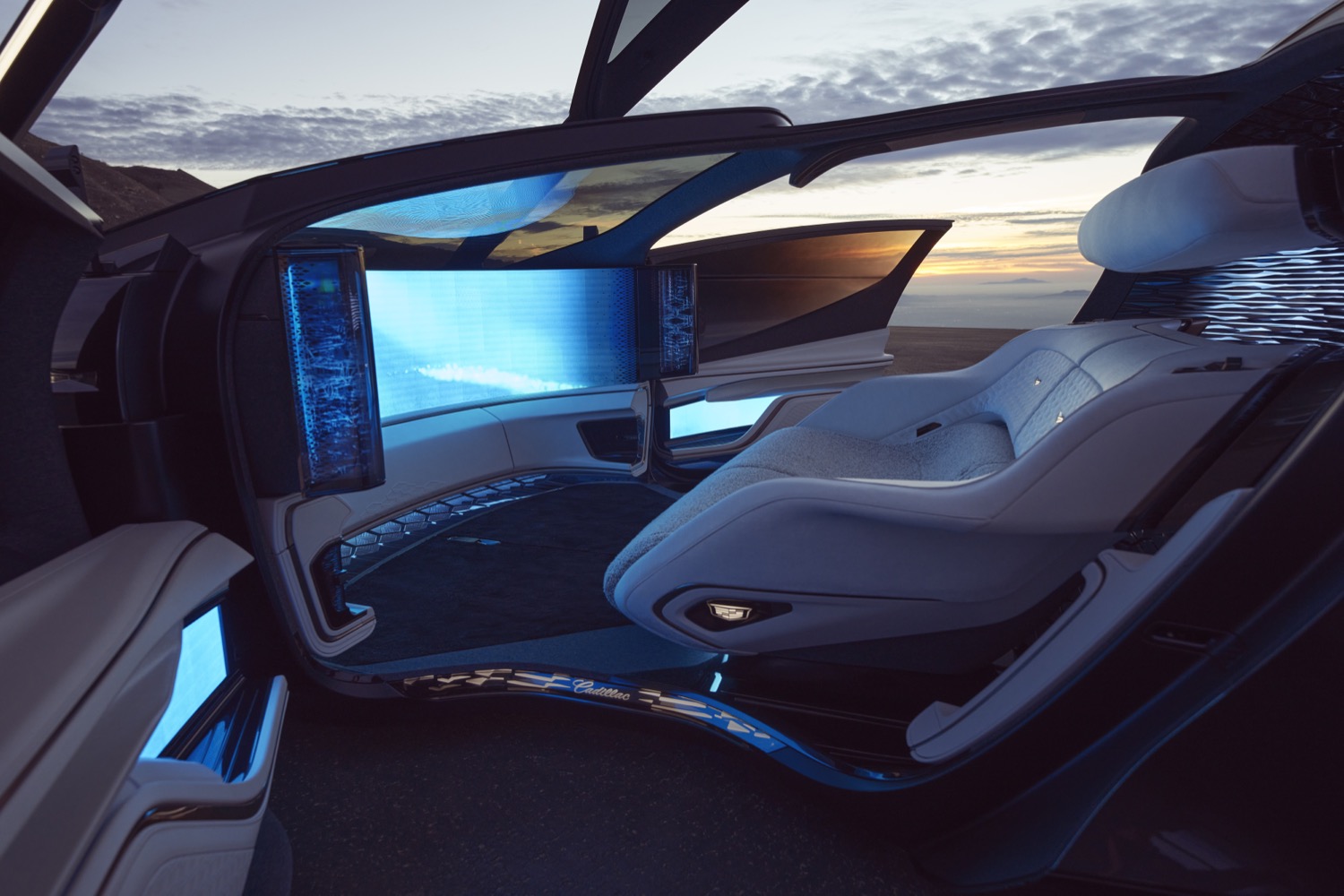 GM’s Ultifi end-to-end software platform, designed to unlock new vehicle experiences and connect customers’ digital lives to their vehicles, is utilized by the InnerSpace to deliver additional themes and features that can be added via over-the-air remote connectivity.

The InnerSpace utilizes GM’s Ultium wireless battery management system, allowing the batteries to be spaced throughout the concept vehicle. This in turn granted designers greater freedom to optimize cabin spaciousness and serenity.

To address the reduced communication between the road and the driver, Goodyear SightLine technology is implemented within the tires. This feature relays important information about pressure, temperature, load and other performance factors, alerting vehicle occupants to the status and health of the tires. 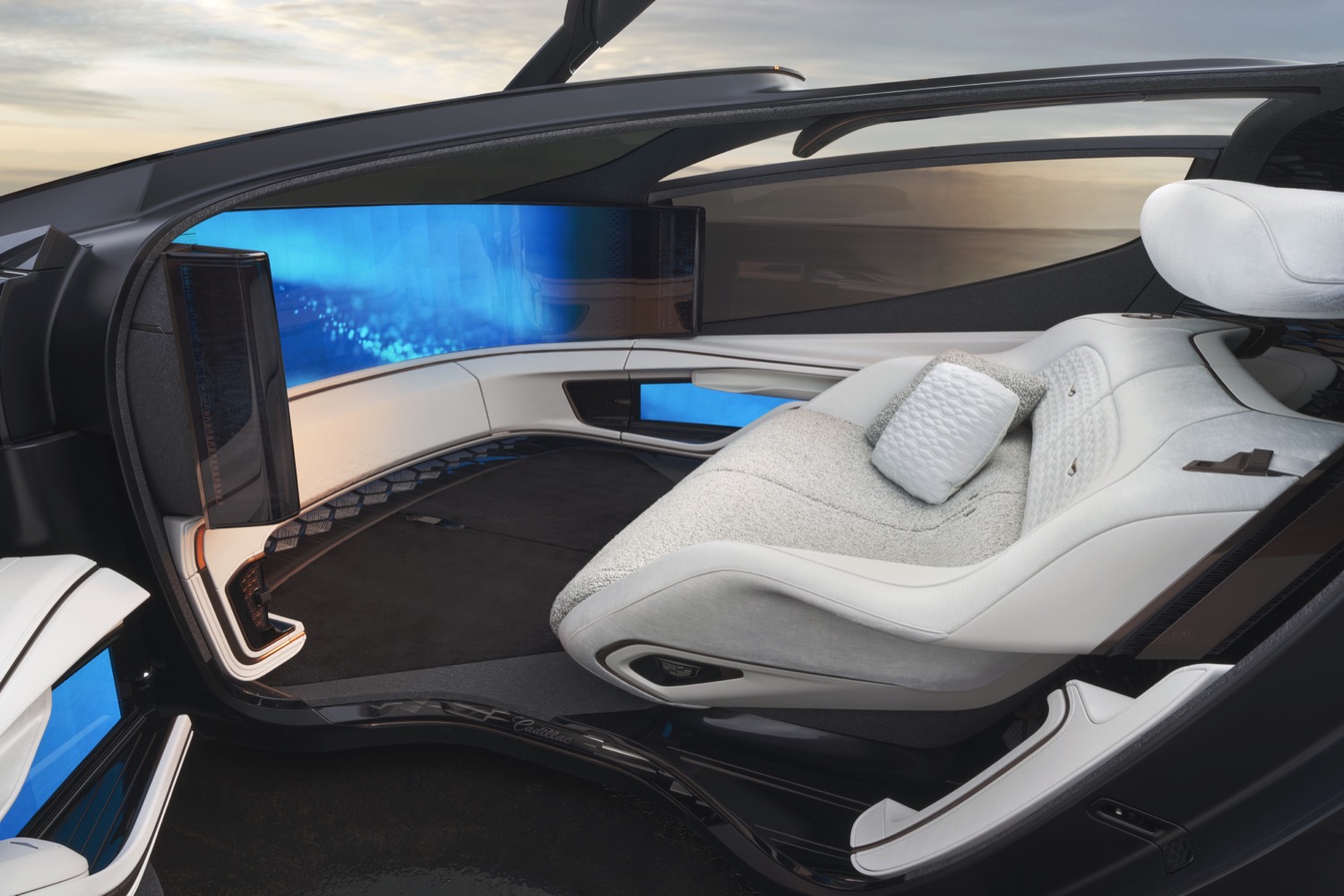 The cabin of the Cadillac InnerSpace features a pair of cushy, ergonomically designed seats. The seats are situated in front of the concept’s expansive panoramic digital display, allowing the two passengers to enjoy the entertainment functions that the InnerSpace has to offer. Additionally, the seats pivot outward when the doors are opened, enhancing the ability to exit and enter the vehicle with comfort and ease.

Interior comfort options include a retractable footrest at the base of the seats, along with an optional shelf situated beneath the LED display to hold items.

Dark flooring contrasts with light accents inside the InnerSpace, lending a flowing design to the interior to compliment the vehicle’s streamlined exterior.

As with the other vehicles in the Cadillac Halo Concept Portfolio, the InnerSpace is fully electric, and likely utilizes GM Ultium battery technology.

The Cadillac InnerSpace concept was unveiled at the 2022 Consumer Electronics Show. Since the concept has not physically been built, the InnerSpace was introduced via a virtual exhibit.

The Cadillac InnerSpace is part of the Cadillac Halo Concept Portfolio of autonomous concept vehicles. Besides the InnerSpace Concept, the portfolio also includes:

The Cadillac InnerSpace concept was featured in GM’s “Dr. EV-il” ad which premiered during Super Bowl LVI in February 2022. In the ad, Dr. Evil from Austin Powers takes over GM Headquarters at the Renaissance Center and plots world domination using the newfound Ultium battery technology. However, he discovers that he is not the number one threat to the world anymore. Instead, that title now belongs to climate change.

From left to right: Cadillac InnerSpace, Chevy Silverado EV, GMC Hummer pickup EV, Cadillac Lyriq, BrightDrop EV600, Cadillac PersonalSpace. a Cadillac SocialSpace can be seen in the back in between the Hummer and the Lyriq.

The InnerSpace is featured twice in this 90-second ad: once at the beginning in Dr. Evil’s war room, and a second time in the garage inside the complex. In the garage scene, the InnerSpace is joined by the other three vehicles in Cadillac’s Halo Concept Portfolio, along with the Cadillac Lyriq, Chevrolet Silverado EV, GMC Hummer pickup EV, and the BrightDrop EV600.