The Cadillac ATS-V.R is a race car that was developed for racing in international FIA GT3-spec events. The ATS-V.R Coupe begins competition in 2015, replacing the CTS-V.R Coupe.

Cadillac Racing unveiled the 2015 Cadillac ATS-V.R Coupe race car on Friday, November 14th, 2014 at the Circuit of The America’s, with drivers Johnny O’Connell and Andy Pilgrim pulling the cover off their new race car. The reveal took place a week ahead of the 2014 Los Angeles International Auto Show, where Cadillac unveiled the all-new ATS-V lineup — the 2015 ATS-V Coupe and 2016 ATS-V Sedan.

The ATS-V.R was the racing extension of the 2016 Cadillac ATS-V Coupe, which – at the time – was the next-generation of elite, high-performance Cadillac vehicles. The ATS-V Coupe represented the culmination of over a decade of high-performance V-Series engineering into a compact model — and was a first for Cadillac.

“The V-Series is the highest expression of Cadillac’s rising product substance,” said Johan de Nysschen, Cadillac president. “Elevating and expanding the V-Series is the next logical step in Cadillac’s growth, including this new race car developed in GT3-specification, enabling us to pursue racing on a more global scale.”

The heart of the ATS-V.R is GM’s LF4.R engine, a twin-turbocharged V6 capable of making as much as 600 horsepower.

The motor is a racing version of the production-spec LF4 3.6L twin-turbo V6, itself a derivative of the LF3 3.6L twin-turbo V6. The engine features specific technical upgrades for the GT3-spec race car, including:

“This car sounds wicked and screams like it’s ripping holes in the air. I love it,” said Andy Pilgrim, Cadillac Racing driver. “We have paddle gear shifters for the first time, and I’m enjoying the new tools. The engine torque is remarkable, as always, pulling strongly out of the corners.”

A full under-tray directs air beneath the car to the rear diffuser, helping create a downforce-producing effect that plants the 18-inch racing tires to the track. In addition, the redesigned fenders contain FIA-mandated tire sizes.

The ATS-V.R was built to meet international FIA GT3 specifications, a highly-coveted pedigree that allows it to potentially compete in more than 30 different GT series events around the world. Other marques in this ultra-competitive racing class include Aston Martin, Audi, Bentley, BMW, Ferrari, Lamborghini, McLaren and Porsche.

The FIA is the governing body for worldwide motorsport, with the GT3 class representing a specific set of specifications for racing cars based on production models.

The lightweight aluminum block and heads of the ATS-V.R’s LF4.R are counterbalanced by a rear transaxle unique to the race car, giving it a front-rear weight distribution of 49 – 51 percent.

“The Cadillac ATS-V.R is a 170-mph billboard for the next generation of Cadillac’s V-Series,” said Cadillac Racing driver Johnny O’Connell. “On top of its power, its aerodynamic package should pay off in the fast corners and I’m looking forward to unleashing it.”

Cadillac Racing was established in 2004. Since then, it has amassed 26 wins, 91 podium finishes (including wins) and 22 pole positions with the CTS-V sedan and CTS-V Coupe race cars.

The ATS-V.R replaces the CTS-V.R as the official race car of Cadillac Racing. 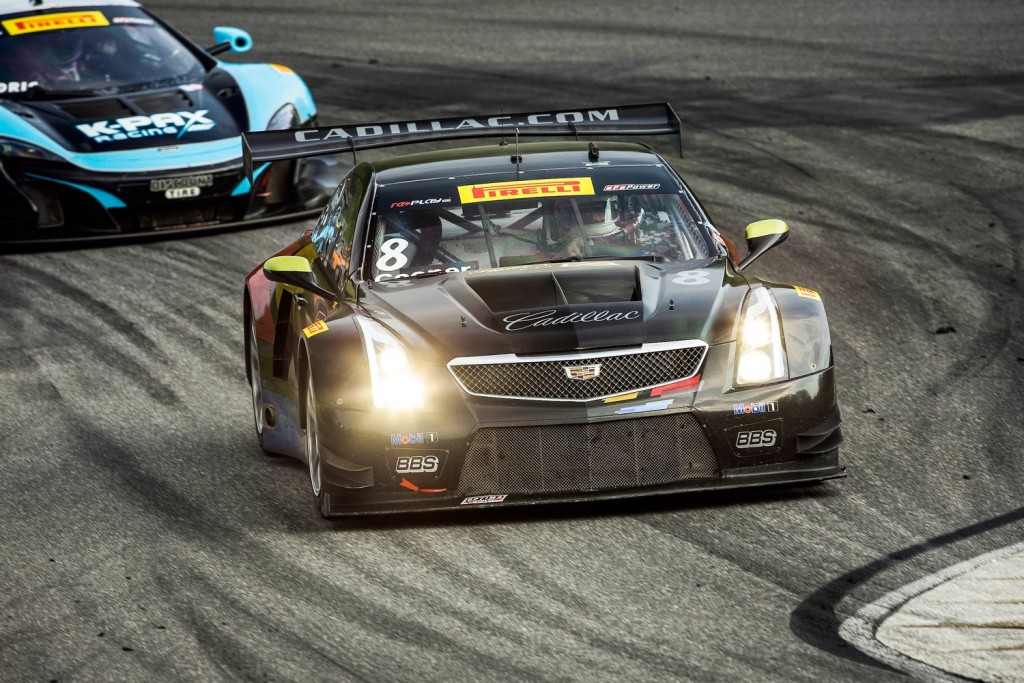 Discuss the Cadillac ATS-V.R in our Cadillac forum.