The “standard” Buick Regal is updated new features, options, and colors for the 2016 model year.

Buick gives the Regal Turbo the same equipment, feature, and color updates as the rest of the 2016 Regal family.

The high-performance Buick Regal GS also receives the same equipment, feature, and color updates as the rest of the 2016 Regal family.

Highlights of the new features and updates to the 2016 Buick Regal include:

Rounding out the changes is the removal of the 110-volt power outlet from the standard equipment list on the 1SN trim level and the deletion of the SD card slots.

Here are the RPO-level changes and updates to the 2016 Buick Regal:

The Regal is tasked with attracting the “contemporary” and “younger-buyer” to the Buick brand. The vehicle’s design features four doors with a swept greenhouse as well as a low and wide stance that makes its sporting intentions clear.

Out back, the chrome “bridge” connects the two LED wraparound taillamps for a more upscale and coupe-like look. Dual stainless-steel exhaust tips round out the refined look.

Nine exterior colors are offered. Only one — Black Onyx — is included in the price of the vehicle, while the other eight are extra:

Like all fifth-generation Regals, the 2016 Regal continues to be available exclusively in a four-door sedan body style.

By contrast, the Regal’s European twins — the Opel Insignia and Vauxhall Insignia — are also offered in four-door hatch and five-door wagon body styles.

The interior of the 2016 Regal combines sculptural beauty and refinement with technology. Chrome, leather, wood and/or piano black accents trim the interior to deliver an upscale ambiance.

The centerpiece of the cabin is Buick’s next-generation IntelliLink infotainment system. It is housed in the “center stack” of the instrument panel and houses the system’s eight-inch color touch screen, serving as the controller for Regal’s audio system, as the display for the rearview camera system, and available navigation system.

All 2016 Buick Regal models come with leather-appointed seats. The standard front seats are buckets with a heating function. On the Regal GS, the front bucket seats are upgraded to sport bucket seats.

The 2016 Buick Regal is offered in the following five trim levels:

The Regal is available with all-wheel-drive. Note: 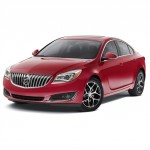 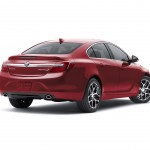 The centerpiece of the Regal’s technology is the next-generation IntelliLink infotainment system. It is housed in the “center stack” of the instrument panel and houses the system’s eight-inch color touch screen, serving as the controller for Regal’s audio system, as the display for the rearview camera system, and available navigation system. For the 2016 Regal, the IntelliLink system receives several new improvements to appearance, performance and connectivity.

The system is designed for easy operation with intuitive controls and smartphone-influenced swipe recognition for easier navigation. It has been revised to be more intuitive for the 2016 Regal.

In addition to icons covering everything from navigation to phone to Pandora, IntelliLink is designed to accommodate new features and enhancements and be highly customizable. It also incorporates natural language voice recognition that allows customers to safely place calls, enter destinations, browse media, play music and control other functions simply by telling the vehicle what to do.

In the Regal GS, an eight-inch configurable color instrument cluster screen is standard. It allows the driver to customize the displayed information with adjustments via steering wheel controls. Continuing with the chrome frame theme, this premium instrument display is framed with chrome accents and delivers chronograph-style graphics in two modes: Touring and Sport. The instrument display is also complemented with a pair of semicircle mechanical instruments for the tachometer and other vehicle functions, portraying the driver-oriented nature of the Regal GS.

New for the eight-inch IntelliLink screen for the 2016 Regal, phone integration technology — provided by Apple CarPlay and Google Auto — is designed to take phone features customers would want to access while driving and put them on the vehicle’s display in a smart, simple manner. The features allow customers to use select smartphone apps through the touchscreen interface. In fact, many features can be controlled via voice commands through a button on the steering wheel, helping drivers keep their eyes on the road and hands on the wheel.

Apple CarPlay capability is offered at the beginning of the 2016 model year.

Apple CarPlay is compatible with iOS 7.1 or higher.

Android Auto is built around Google Maps, Google Now and the ability to talk to Google, as well as a growing audio and messaging app ecosystem that includes:

Complementing IntelliLink to enhance the Regal’s connectivity is OnStar 4G LTE connectivity and Wi-Fi hotspot. It provides a mobile hub for drivers and passengers to stay connected. The hotspot is on whenever the vehicle is on and comes with a three-month/three-gigabyte data trial.

4G LTE is the most current and fastest mobile data network – 10 times faster than 3G and 100 times faster than the previous generation of OnStar hardware. And with OnStar, it also offers stronger, broader coverage than smartphones on the same network and it’s easy to use.

At the time of purchase, one year of OnStar Guidance includes all of OnStar’s advisor-based safety and security features, including Automatic Crash Response and Stolen Vehicle Assistance, as well as Turn-by-Turn navigation.

Only available on the 1SV model, the naturally-aspirated 2.4L I4 Ecotec engine (production code LEA) rated at 182 horsepower and 172 pound-feet of torque. The motor features spark ignition direct injection and variable valve timing, with fuel economy coming in at 31 MPG highway and 19 MPG city.

The 2.4L I4 LEA is paired to GM’s six-speed Hydra-Matic 6T45 MH8 automatic transmission. The engine is available exclusively in front-wheel drive configuration; it is not available in all-wheel drive.

Available on all Regal trim levels above 1SV, including Regal 1SL, Premium I, Premium II and GS trim levels, the 2.0L Turbo I4 (production code LTG) serves as the optional performance-oriented engine and delivers 259 horsepower and 295 pound-feet of torque at 3000-4000 rpm (2500-4000 for the Regal GS).

The engine can be paired to two six-speed automatic transmissions:

Transmission options remain the same as the Regal Turbo:

Only available to fleet customers, the 2.4L I4 (production code LUK) offers a mild-hybrid powertrain exclusively on the Premium I/1SN trim level.

The eAssist mild-hybrid engine features Stop/Start technology, which shuts down the engine in certain situations, such as stopping at a traffic light, to significantly reduce fuel consumption. The engine will turn back on upon the driver releasing the brake pedal. Fuel economy rises to 35 MPG highway and 25 MPG city.

The 2.4L I4 eAssist LUK is paired to GM’s six-speed Hydra-Matic 6T40 MHH transmission. The mild-hybrid 2.4L eAssist engine is available exclusively in front-wheel drive configuration; it is not available in all-wheel drive.

The 2016 Buick Regal is available in front-wheel drive. All-wheel drive is an option.

Available with the 2.0L turbo engine, the advanced all-wheel drive Haldex system is designed to offer “sure-footed” handling in low-grip conditions and provide a more performance-oriented driving experience. The Regal’s AWD system is fully automatic and on-demand that employs wheel-slip management and an electronic limited-slip rear differential. In regular conditions, the system will apply minimal torque to the rear wheels when AWD traction isn’t required.

Not only does the AWD system optimize traction in all driving conditions, it also enhances cornering capability. The capability is even more exaggerated in the Regal GS model, where the driver can use the Interactive Drive Control System, adjusting parameters such as traction control and steering weight.

The 2016 Buick Regal rides on GM’s Epsilon II platform. The architecture is shared with the following vehicles:

With a chassis developed by GM’s Opel arm in Germany, the fifth-generation Buick Regal has sport-sedan dynamics with the quiet and refined ride common to Buick vehicles.

With one of the most rigid body structures in its segment, the Regal has the handling chops to back up its sporty styling. Other performance highlights include:

The Regal’s Interactive Drive Control System chassis technology is standard on the Regal GS. It offers enhanced vehicle stability and greater driving safety. It is designed to change the personality of the car based on the personality of the driver. A sophisticated driving mode control module continually monitors driving style utilizing yaw rate, lateral and longitudinal acceleration, steering wheel, throttle and vehicle speed. It defines the dynamic vehicle state, including acceleration, braking and cornering, to optimize chassis reactions. It also executes all of the driver selections.

All four dampers are electronically controlled and continuously adapt within milliseconds to the prevailing road conditions, vehicle movements and individual driving style. Chassis settings are adjustable by the driver, with Standard, Tour and Sport settings.

Selecting “Sport” mode optimizes the car for dynamic driving, tightening the suspension and steering response and speeding up the reaction of the automatic transmission.

The “Tour” mode is optimal for long-distance cruising or rough road conditions, providing an increase in comfort.

“Standard” or Default Mode is the perfect all-around setting for daily commuting and city traffic.

The other major benefit of Interactive Drive Control is that it automatically adapts Regal’s performance settings to individual driving styles. When a driver begins to drive more aggressively it will tighten the suspension and increase steering effort and change to a more aggressive throttle response. When the vehicle senses that the driver is doing relaxed cruising, it adjusts settings for rolling smoothness and comfort.

Apart from a more rewarding driving experience, Interactive Drive Control also offers safety benefits in emergency situations. For example, if an obstacle must be avoided when the car is in Tour mode, various chassis sensors convey this to the DMC and the dampers are stiffened within milliseconds, delivering greater body control.

Buick has officially released the following 0-60 mph figures for the 2016 Regal:

In addition to the new OnStar 4G LTE with standard built-in Wi-Fi hotspot, OnStar offers other benefits to Buick Regal drivers. At the time of purchase, one year of the OnStar Guidance plan includes all of OnStar’s advisor-based safety and security features, including Automatic Crash Response and Stolen Vehicle Assistance, as well as Turn-by-Turn navigation.

The 2016 Regal is produced at General Motors’ Oshawa assembly plant in Ontario, Canada.

The 2016 Buick Regal began arriving on dealer lots in the August-September timeframe of 2016.

Depending on the configuration, the Buick Regal competes in two segments: the mid-size premium vehicle segment and the compact sport-luxury vehicle segment. Competing vehicles from each segment are as follows: