The 2016 Buick Envision is a compact crossover from General Motors’ Buick brand. It went on sale in China in late 2015 and in North America in the summer of 2016.

Buick describes the Envision as “one of the most significant models to be introduced to the SUV market this year in China”, delivering “segment-challenging driving dynamics, advanced technology, connectivity and Buick’s trademark interior acoustics.”

The Buick Envision fills a specific and vital role in Buick’s crossover lineup by bridging the monumental gap between the Encore and Enclave. Prior to the Envision, Buick only had two crossovers: the full-size, three-row Enclave and the sub-compact, two-row Encore. 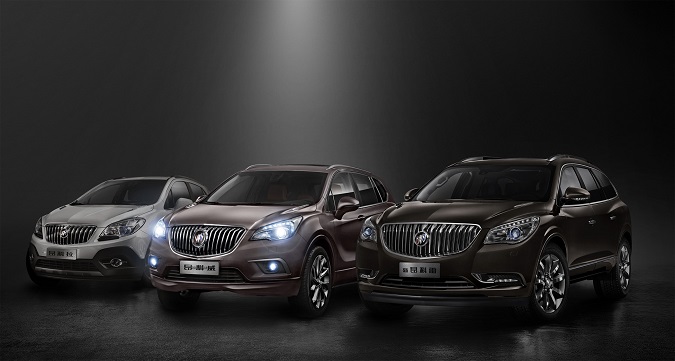 Envision is positioned between the Encore and Enclave

For the North American markets, Buick says that the Envision “will play an important role in a crossover lineup that currently represents 60 percent of Buick sales in North America” when it goes on sale in 2016, targeting “customers shopping between the Encore, the best-selling Buick in eight years, and the Enclave, which has continued to grow its customer base since its 2007 introduction.”

The design is sporty and stylish while also representing being true to the SUV form. Noaccle elements of the design include a dynamic and sharp front, a smooth sideline, and a graceful rear. Buick’s signature waterfall grille with drag-reducing aerodynamic properties, wing-style front and rear lights with LED daytime running lights plus HID automatic headlamps, 19-inch aluminum alloy wheels, an aluminum alloy luggage rack, and a wing-shaped spoiler give the Envision an imposing and aggressive stance.

The interior of the 2016 Buick Envision adopts Buick’s signature 360-degree integrated interior design for a blend of luxury, refinement and advanced technologies. The team focused on the following four pillars when developing the Envision’s cabin:

With its driver-friendly center console, all controls are within easy reach. Customers have a choice of a Burgundy or Swallowtail Black interior while black piano accents create a premium effect. French-style dual stitching further accentuates the model’s elegance.

The Envision measures 4,667 mm in length, 1,839 mm in width and 1,696 mm in height, and rides on a wheelbase of 2,750 mm, giving it a roomy interior. The split rear seats fold flat and can slide forward or backward to provide up to 1,550 liters of space for carrying cargo. In addition, there are 24 storage compartments.

Some other highlights of the Envision’s cabin include adjusaccle seats, rear seats that can slide forward or backward within a maximum range of 180 mm, as well as a panoramic moonroof. 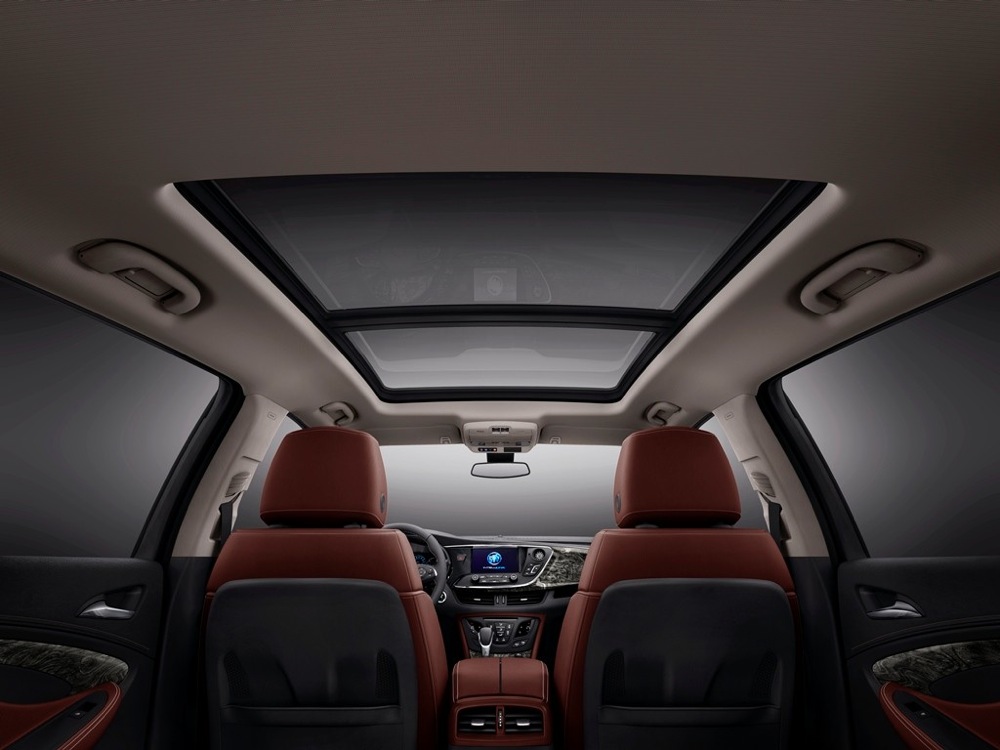 The 2016 Buick Envision is available in the following six exterior colors:

All paint colors with the exception of Summit White are premium extra-charge colors.

The 2016 Envision is available in the following four interior color combinations:

The Envision’s robust structure is the foundation for a balanced and confident driving experience.

The crossover’s chassis consists of a MacPherson strut front suspension, an optimized and fully independent four-link rear suspension, and a full front subframe. This gives the compact crossover exceptional rigidity and precise handling.

Meanwhile, the GM-Buick HiPer Strut front suspension reduces torque steer and benefits steering feel. The feature was inspired by the athletic Regal GS sedan and is not offered on any crossover vehicle, including competitors such as the Audi Q5.

The Envision features Buick’s first active Twin Clutch AWD system designed to make the most of handling and stability in all driving conditions. It is a fully automatic, on-demand system engineered to deliver sure-footed handling in low-grip conditions, while also contributing to a quieter and smoother ride with minimal torque transferred to the rear wheels when all-wheel-drive traction isn’t needed.

In China, the Envision features the FlexRide system, which provides four selectable driving modes — Normal, Tour, Sport and Off-Road — for a personalized and flexible driving experience.

The Envision 20T comes with the turbo-charged 1.5L LFV Spark Ignition Direct Injection (SIDI) engine and an intelligent seven-speed DCG transmission, along with a choice of front-wheel drive or intelligent all-wheel drive.

GM’s latest-generation intelligent seven-speed DCG transmission has an innovative design and more than 50 patented technologies. It delivers smooth and responsive gear shifting for a tranquil ride.

The powertrain combination offers maximum power of 124 kW at 5,600 rpm and peak torque of 250 Nm between 1,700 rpm and 4,400 rpm. It can run on #92 unleaded gasoline. With the start/stop function, which comes standard, the Envision 20T provides segment-leading combined fuel economy of 6.6L per 100 km. It complies with China’s advanced National V emission standard.

Not much is currently known about the seven-speed DCG transmission in the 20T model. However, the Buick Envision 28T features the new-generation six-speed DSS intelligent transmission that is smooth and responsive, while being efficient to significantly reduce fuel consumption in city driving.

The Envision features a unique intelligent all-wheel drive system that can automatically distribute power between front and rear wheels as well as between two rear wheels “in a faster manner”, helping significantly enhance steering saccility and drive capability to ensure a superb ride.

Offered for the first time by GM, the system features two electronically controlled multi-plate clutches in the rear axle that automatically distribute torque from the front to rear wheels and between the rear wheels as needed, capable of providing a 0:100-100:0 torque split. This capability makes it more responsive, flexible and efficient, and provides a more exceptional driving experience with enhanced ride comfort and dynamics than conventional all-wheel-drive systems.

In North America, the 2016 Buick Envision is offered with a single engine and single transmission.

The 2016 Envision features the turbo-charged 2.0L LTG four-cylinder engine SAE certified at 252 horsepower (186 kW) and 260 lb-ft of torque (353 Nm), which is more standard horsepower and torque than an Audi Q5. It is paired with a third-generation six-speed automatic transmission.

Performance and efficiency is enhanced with Stop/Start technology – Buick’s first application on the 2.0L turbo engine. It seamlessly shuts down the engine when the Envision comes to a stop under certain driving conditions, such as a stoplight. The engine automatically restarts when the driver takes his or her foot off the brake.

The 2.0L turbo engine is offered exclusively with AWD, giving the Envision performance consistent with vehicle’s ride and handling capabilities. The turbocharger features a twin-scroll design that helps the engine deliver a broad torque band, for a greater feeling of power on demand. Ninety percent of peak torque is available from 1,800 rpm to 5,500 rpm and the full 260 lb-ft of peak torque from 3,000 to 4,000 rpm.

The engine is designed with refinement-enhancing features such as balance shafts and sound-attenuating components; and is isolated on a hydraulically damped substructure that helps quell noise and vibration. Four powertrain mounts are used rather than the conventional three.

The Buick Envision is equipped with Buick’s advanced IntelliLink connectivity system that connects the vehicle with people and their smartphones. The system includes an eight-inch high-definition touchscreen, multifunctional buttons on the steering wheel, a touchpad and voice control.

The Envision is the first vehicle in its segment in China to come standard with Active Noise Cancellation technology, which reads sound waves through microphones inside the vehicle and produces an opposite sound wave from speakers to counteract it. The vehicle also employs Buick’s Quiet-Tuning technology, which reduces, blocks or absorbs noise. Quiet Tuning also includes the use of liquid applied sound dampers (LASD). Compared with traditional sound insulating pads, LASD are not only lighter and greener, but also deliver better sound-proofing and shock-absorbing performance.

High-tech elements can also be seen in the Envision’s amenities and functions. For example, the all-new intelligent drag-reducing intake grille shuts automatically to lower wind drag and reduce fuel consumption when the vehicle starts or operates at high speeds. The rear power liftgate can be completely or partially opened by adjusting the opening height in three levels. The top-of-the-line Envision model features a foot-sensing function to allow hands-free opening of the liftgate.

Complementing IntelliLink to enhance the Envision’s connectivity is the GM-OnStar telematics system.

The 2.0-liter four-cylinder engine is capable of propelling the Envision from 0 to 100 km/h in 8.4 seconds.

The 2016 Buick Envision is available in the following markets:

Buick has yet to announce pricing for the 2016 Envision in North America.

In April of 2011, Buick released the Envision Concept. The show car featured futuristic features such as gull-wing doors and an interior that some equated to a spaceship. However, the general design of the concept car served as a precursor of a compact crossover from Buick.

In January 2012, General Motors filed a trademark application with the United States Patent and Trademark Office for the term Envision; GM Authority was first to note that the name will most definitely is being reserved for an upcoming Buick crossover.

Buick then began teasing the Envision CUV in July of 2014. Images of the Envision were leaked several times before the crossover’s official unveiling on August 28th.