The Encore subcompact crossover receives several changes and updates for the 2016 model year.

Highlights of the new features and updates to the 2016 Encore include:

For 2016, the Encore adds new colors, a Sport Touring model, and new wheels.

From a colors standpoint, the 2016 Buick Encore does away with two colors, adds three new ones, and renames three others:

In addition, the 2016 Encore introduces the new Encore Sport Touring model, which features:

Here are the RPO-level changes and updates to the 2016 Buick Encore:

The Encore features sculpted styling that identifies it as a contemporary Buick. A short axle-to-dash ratio gives away its front-wheel drive roots.

Inside, the Encore’s distinctive exterior styling carries over to a flowing instrument panel that wraps naturally into the door panels.

Ice-blue ambient lighting and select use of chrome and woodgrain trim add detailed touches to the interior.

Premium seats feature high-density foam for greater comfort on long drives. They are trimmed in either cloth/leatherette or available premium leather.

The Encore features ample storage, including:

The Encore offers 18.8 cubic feet (532 liters) of storage behind the split-folding rear seat and 48.4 cubic feet (1,371 liters) with the rear seat folded. The front passenger seat also folds flat to extend the cargo length and accommodate items up to eight feet long.

The 2016 Buick Encore continues to offer front bucket seats, and the surfaces of all seats can be covered in:

Note, the Saddle interior color is only available in leather.

Interior upholstery and color combinations include:

The 2016 Buick Encore is offered in the following exterior colors and interior color combinations: 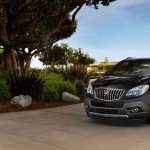 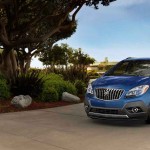 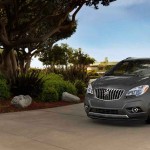 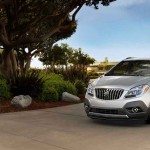 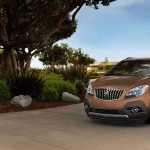 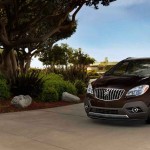 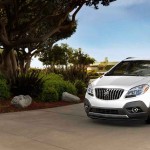 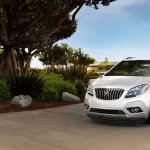 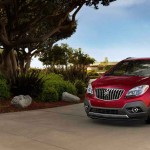 At the core of Encore’s in-vehicle technology is the IntelliLink infotainment system. It provides easy, intuitive operation of basic functions, yet it is also highly customizable and capable of linking multiple devices such as smartphones, USB and MP3 players, giving users more ways of staying connected.

The system features a seven-inch-diagonal color screen. Unlike Buick IntelliLink systems in other Buick vehicles, the system in the Encore isn’t touchscreen but is instead controlled by a knob on the center stack. Icons on the screen cover everything from navigation to phone to Pandora. The system was designed to accommodate new features and enhancements after the vehicle was built, while being highly customizable.

It also incorporates natural language voice recognition that allows customers to safely place calls, enter destinations, browse media, play music and control other functions simply by telling the vehicle what to do.

Connectivity and convenience features of the system include:

Each enables voice-controlled connectivity in order to help keep phones safely stored and the driver’s hands on the wheel.

The seven-inch IntelliLink screen also serves as the display for the standard rearview camera system.

A premium, seven-speaker Bose audio system with amplifier is available on Convenience and Leather models and is standard on the Premium model.

Complementing the IntellLink infotainment system of the 2016 Encore is the OnStar 4G LTE connection and Wi-Fi hotspot. The hotspot provides a mobile hub for drivers and passengers to stay connected and is on whenever the vehicle is on. It comes with a three-month/three-gigabyte data trial.

4G LTE is the most current and fastest mobile data network – 10 times faster than 3G and 100 times faster than the previous generation of OnStar hardware. And with OnStar, it also offers stronger, broader coverage than smartphones on the same network and it’s easy to use.

At the time of purchase, a six month trial of the OnStar Guidance service includes all of OnStar’s advisor-based safety and security features, including Automatic Crash Response and Stolen Vehicle Assistance, as well as Turn-by-Turn navigation.

Buick’s exclusive QuietTuning is designed to block or absorb sound and dampen or eliminate vibrations. For the Encore, specific content was applied to achieve 30 sound benchmarks for refinement, including Buick’s first application of Bose Active Noise Cancellation. It uses ceiling-mounted microphones to detect audible engine noise, the frequencies of which are processed by a computer that directs counteracting sound waves through the audio system’s speakers and subwoofer.

The standard engine in the 2016 Buick Encore is an efficient and power-dense 1.4L turbo-charged Ecotec inline-four (1.4L Turbo I4 LUV). It generates an SAE-certified 138 horsepower (102 kW) and 148 pound-feet of torque (200 Nm) between 1,850 and 4,900 rpm. The wide rpm range for the maximum torque – a specific trait of turbocharged engines – helps it deliver a better driving experience and performance.

The engine’s turbocharger is integrated within the exhaust manifold, reducing weight and providing greater packaging flexibility. A reinforced crankshaft and forged connecting rods deliver additional strength to support the engine’s pressurized power and torque over a wide rpm band.

The Encore Sport Touring is powered by an all-new, 1.4L turbocharged engine (1.4L Turbo I4 LE2) derived from GM’s all-new family of small gasoline engines. It is estimated at 153 horsepower (112 kW) and 177 pound-feet of torque (240 Nm) and features direct injection and stop/start technology.

The engine incorporates an aluminum cylinder block and head that enhance performance and efficiency. Engine efficiency is also enhanced through reduced friction, including low-friction piston rings, a low-friction camshaft drive, and a low-friction oil pump.

The start/stop feature automatically shuts down the engine when the car comes to a stop under certain driving conditions, such as a stoplight. The engine automatically restarts when the driver takes his or her foot off the brake.

Both are part of a family of six-speed front- and all-wheel-drive transaxles developed for small cars and crossovers.

They also offer a “steep” first gear and a “tall” overdrive top gear to achieve a wide ratio spread of 6.14:1. This allows the Encore to achieve robust acceleration, as well as fuel efficiency and lower engine noise at highway cruising speeds.

Like all first-generation units of the Buick Encore, the 2016 Encore rides on a variant of GM’s Gamma II platform. The architecture is directly shared with the Opel Mokka and Vauxhall Mokka while also being shared with the Chevrolet Aveo/Sonic.

Two hydraulic engine mounts are tailored to the engine’s inherent torque axis to disrupt the transmission of vibration and noise.

The 2016 Encore is engineered with a “one-tire” philosophy, where everything is optimized around a single 18-inch tire specification that is designed for a quieter interior, more precise suspension tuning and great driving refinement

The Buick Encore is designed with technologies – including available radar-based features – that help avoid crashes and protect occupants in case one occurs.

The Encore’s structural protection is complemented with 10 standard air bags, including:

Technologies that help avoid crashes include:

The 2016 Encore introduces a new Sport Touring model that Buick describes as a “more spirited take on the popular crossover.”

The exterior of the Encore Sport Touring features several unique elements compared to the non-Sport Touring models, including:

The 1.4L Turbo I4 LE2 is part of a new, global family of small, power-dense engines developed to balance performance and efficiency with exceptional refinement.

Direct injection helps the motor generate an estimated at 153 horsepower (112 kW) and 177 pound-feet of torque (240 Nm), for about 11 percent more horsepower and nearly 20 percent more torque than the Encore’s standard 1.4L I4 LUV engine – and a greater feeling of power on demand, particularly at low- and mid-range engine speeds. The all-new 1.4L Turbo I4 LE2 is matched with a six-speed automatic transmission.

Stop/start technology further contributes to reduced fuel consumption in stop-and-go driving by automatically shutting down the engine when the vehicle comes to a stop under certain driving conditions, such as a stoplight. The engine automatically restarts when the driver takes his or her foot off the brake.

The Encore Sport Touring’s LE2 is mated to GM’s Hydra-Matic 6T40 MNH transmission. The gearbox is part of a family of six-speed front- and all-wheel-drive transaxles developed for small cars and crossovers. 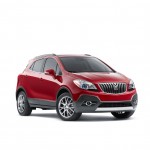 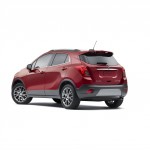 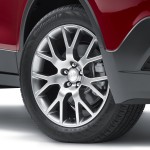 In 2015, the Buick Encore received the following awards:

The 2016 Buick Encore is offered in five trim levels, which carry the following starting prices:

All models offer room for five and up to 48.4 cubic feet (1,371 liters) of storage space, along with a confident, higher driving position. All-wheel drive is a $1,500 option on all models.

The Encore (1SB) is generously equipped with the following standard features:

The trim levels progressively add standard equipment with packages available in both front-wheel and all-wheel-drive models:

For models supplied to the North American market, the 2016 Buick Encore is produced at GM’s plant in Bupyeong, South Korea.

The 2016 Buick Encore began arriving on dealer lots in the August-September timeframe of 2016.

The 2016 Buick Encore is available in markets where Buick has an official presence, including:

The Buick Encore continues to compete in the premium subcompact crossover segment, where it is the only vehicle in its class.

Similarly-sized vehicles in the more expensive luxury subcompact class include: