Sometimes, all it takes is one adrenaline-fueled run to get hooked on motorsport – which is exactly what happened to the builder of this LS-swapped Nissan Frontier.

The wrench behind this pickup is Stephen Dorrick, who heads up LOJ Conversions in Little Egg Harbor, New Jersey. LOJ Conversions offers a range of different performance parts for various Nissan and Infiniti applications, with a specialization in LS motor swaps, including drift build kits.

Although it isn’t a drift car, this 2005 Nissan Frontier started as a show vehicle to demonstrate what Dorrick and LOJ Conversions could accomplish in terms of vehicle building and fabrication. While certainly an eye-catching truck, this twin-turbo LS-powered Nissan Frontier also has some serious performance on tap – something that Dorrick got an itch to test for himself.

“Last year at LS Fest East in Kentucky I decided, ‘you know what, I don’t want to just sit in a booth the entire event. Let me do the autocross.’ I got the bug,” Dorrick says.

With his new adrenaline addiction, Dorrick decided to update the Nissan Frontier to make it more capable on the autocross course, including updates to the brakes and suspension. The current setup includes Wilwood stoppers mounted underneath Forgeline wheels sized at 20 inches by 12 inches, providing the performer with a rather impressive footprint. 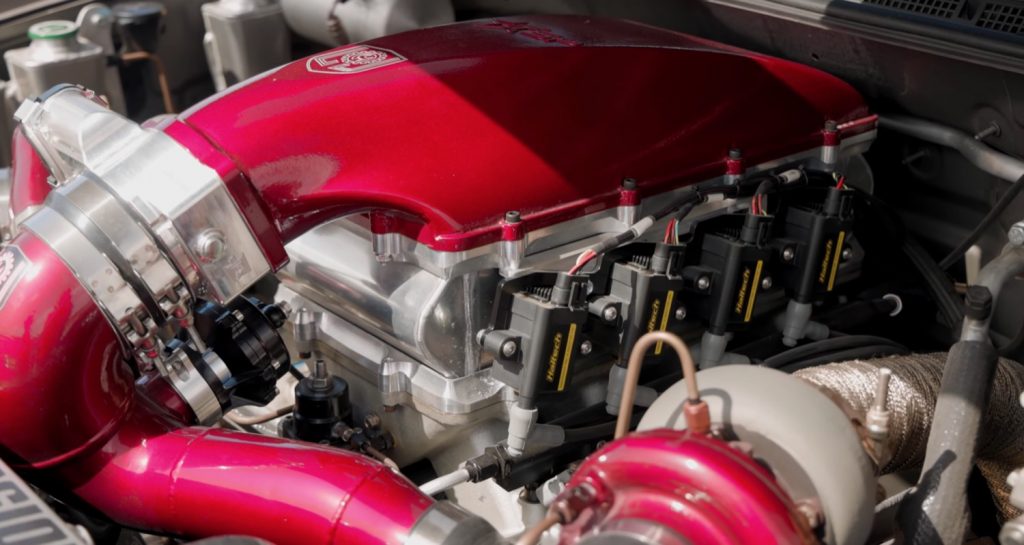 As for the power spec, the Nissan Frontier is motivated by a 6.0L LS V8 with a stock aluminum Gen 4 block stuffed with forged rods and pistons, plus a Texas Speed top end. Dorrick handled the fabrication for the twin-turbo setup himself. Output is measured at 700 horsepower at 12 pounds of boost, all of which is sent to the pavement by way of an all-wheel drive system.

Although this truck is quite heavy, tipping the scales at an estimated 5,000 pounds with driver, all that power and grip is sure to pay dividends when slicing through some cones. Check out the full video right here: