The E-Ray borrows the Corvette Stingray’s naturally aspirated 6.2L V8 LT2 engine, which produces 495 horsepower and 470 pound-feet of torque, but adds an electric motor on the front axle that generates 160 horsepower and 125 pound-feet. Combined output is pegged at 655 horsepower. A new variant (RPO code MLH) of the C8’s dual-clutch, eight-speed automatic transmission sends the gasoline engine’s power to the rear wheels, while the electric motor feeds the front wheels. For the first ever, the Chevy Corvette is equipped with an all-wheel drivetrain. 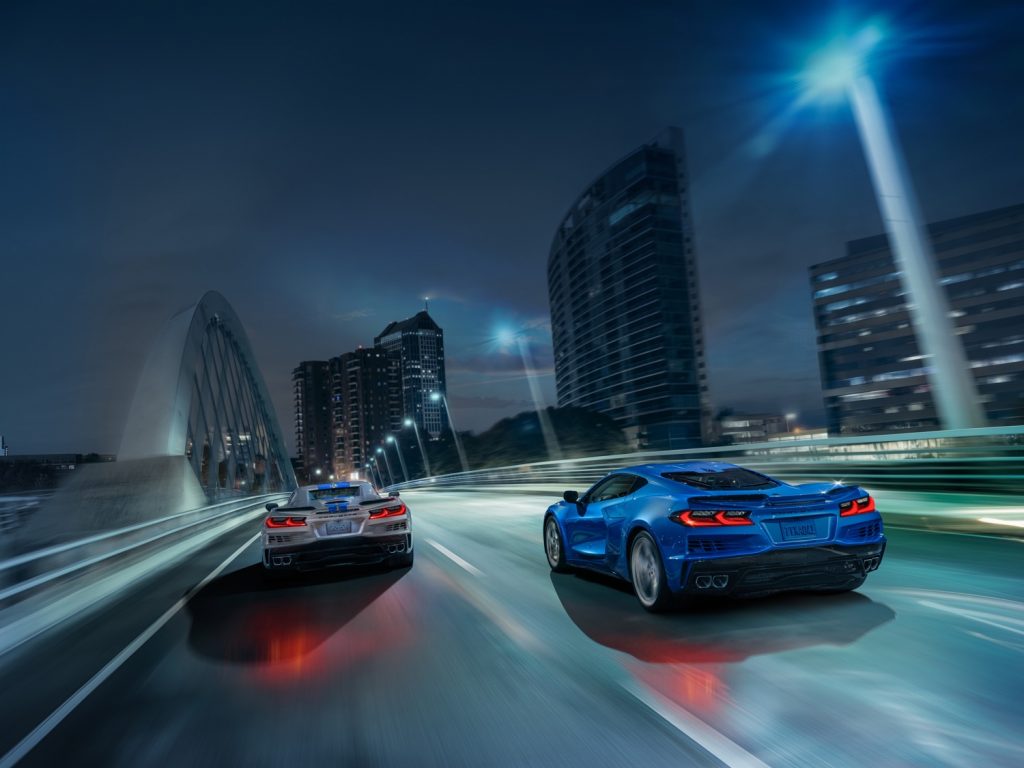 According to GM, the 2024 Corvette E-Ray is able to accelerate from 0 to 60 mph in 2.5 seconds, a tenth of a second quicker then what the Z06 can achieve. It can also cover a quarter mile in 10.5 seconds while reaching a trap speed of 130 mph. This despite the E-Ray posting a base curb weight of 3,774 pounds for the coupe and 3,856 pounds for the convertible, or roughly 400 pounds heavier than the Stingray and about 300 more than the Z06 equipped with the carbon fiber wheels and Z07 Performance package.

The C8 Corvette E-Ray hybrid also features a 1.9 kWh battery pack that’s located between the seats, which is self-recharged under normal driving conditions as well as when the car is coasting or decelerating. A new Stealth Mode allows the E-Ray to be temporarily driven on electric power alone at speeds of up to 45 mph, which our neighbors will appreciate when we leave home early in the morning. 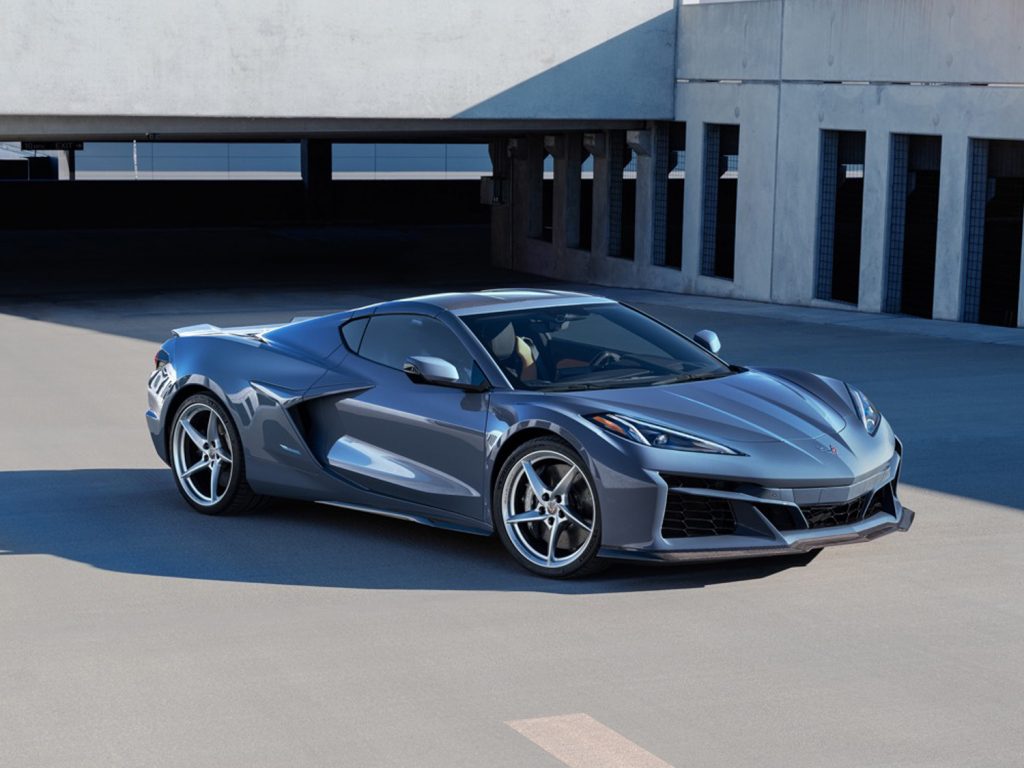 In addition to the Corvette’s usual drive modes – Tour, Sport, Track, Weather, My Mode and Z-Mode – the E-Ray includes a new Charge+ mode that maximizes the battery pack’s state of charge for when owners want maximum performance, such as on a track. The E-Ray will be equipped as standard with the Brembo Carbon Ceramic brakes and the Magnetic Ride Control 4.0 suspension as well. An optional ZER Performance package adds Michelin Pilot Sport 4 ZP summer tires, unique chassis tuning and other performance-minded enhancements. Meanwhile, the E-Ray Performance App displayed on the infotainment screen shows the propulsion system in action, providing dynamic gauges, power and torque graphs, along with efficiency and performance data. 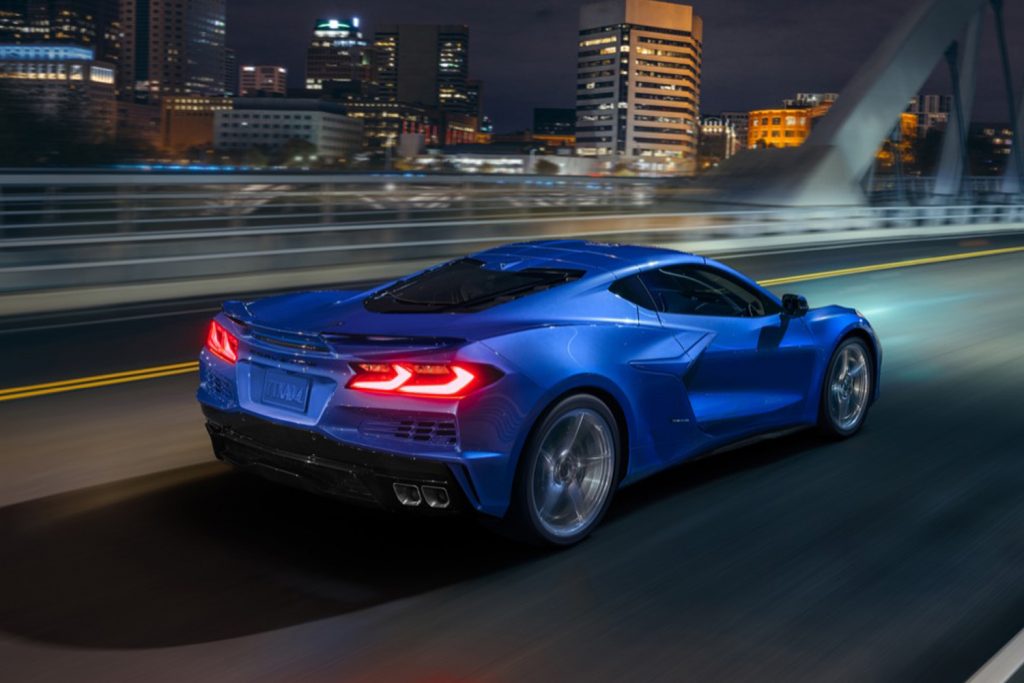 Visually, the 2024 Corvette E-Ray shares the Z06’s wider body while being equipped with a unique set of lightweight twisted, five-spoke alloy wheels, available in four finishes. Body-color accents and carbon flash badging are also standard, while black exhaust tips and bright badging, an Electric Blue body-length stripe package and carbon fiber ground effects are also available on the options list. In addition, buyers can upgrade to carbon fiber wheels in one of three finishes.

The Corvette E-Ray debuts a new interior colorway as well, called Artemis Dipped, featuring deep green hues. According to GM, it will only be available on the 2024 Corvette. 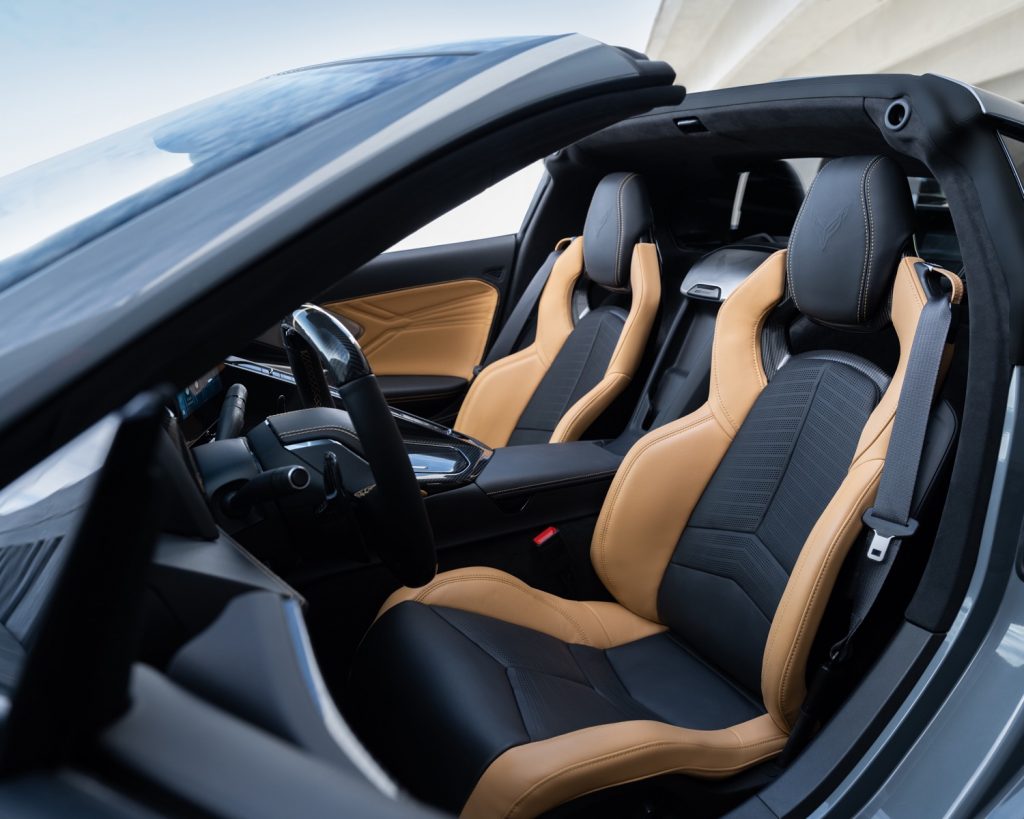 The 2024 Corvette E-Ray hybrid will go on sale in late 2023, and will be built at the GM Bowling Green plant in Kentucky, alongside the Stingray and Z06 variants. 1LZ, 2LZ and 3LZ trim levels will be available in both body styles, with pricing that starts at $104,295 for the coupe and $111,295 for the convertible, destination freight charge included.