The 2024 model year is set to be an exciting year for the Sierra HD, as Big Red’s heavy duty lineup introduces a mid-cycle refresh that features a few updates to the exterior, an overhauled interior and various powertrain improvements. One of the other updates to the 2024 Sierra HD is the upcoming addition of the Sierra HD AT4X, a beastly off-road model that GM Authority was the first to tell you about way back in March of 2022. We’ve spied prototypes of the upcoming Sierra HD AT4X several times in the past, and have some new shots to share with you today. 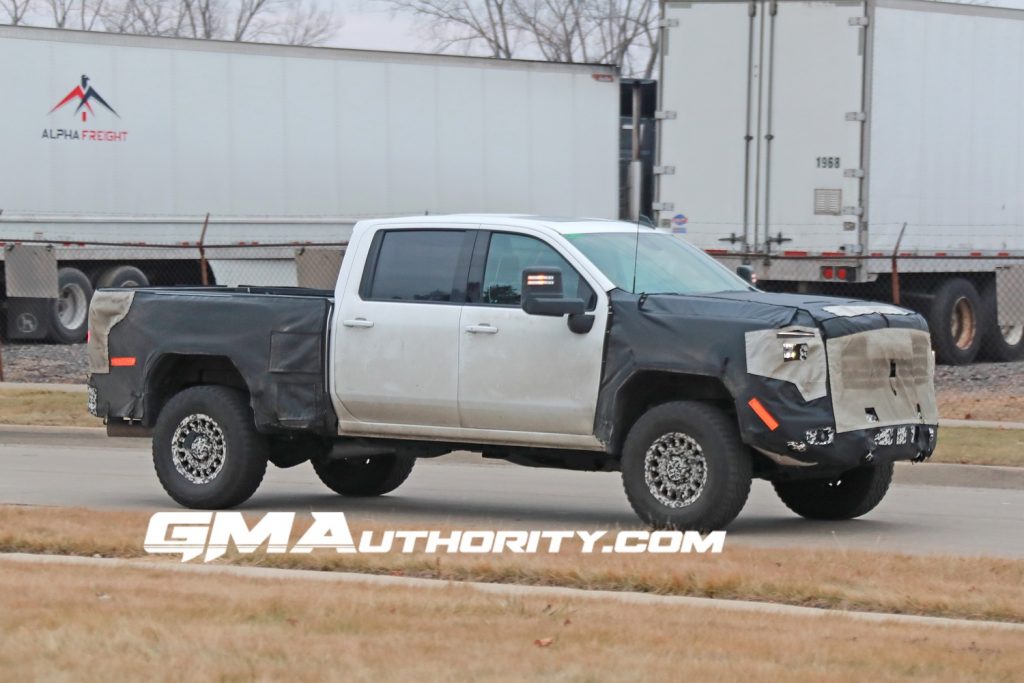 As a quick refresher, the upcoming Sierra HD AT4X will feature a bevy of all-terrain goodies, including chunky 35-inch Goodyear Wrangler Territory MT tires and a high-clearance front bumper. Perhaps even more noteworthy will be the MultiMatic DSSV shocks along with the front and rear locking differentials. These features will position the 2024 Sierra HD AT4X above the Sierra HD AT4, as one of the most off-road capable GMC vehicles.

It’s also worth noting that the Sierra HD AT4X will be joined by its corporate cousin from Chevrolet – the previously-spied Silverado HD ZR2. 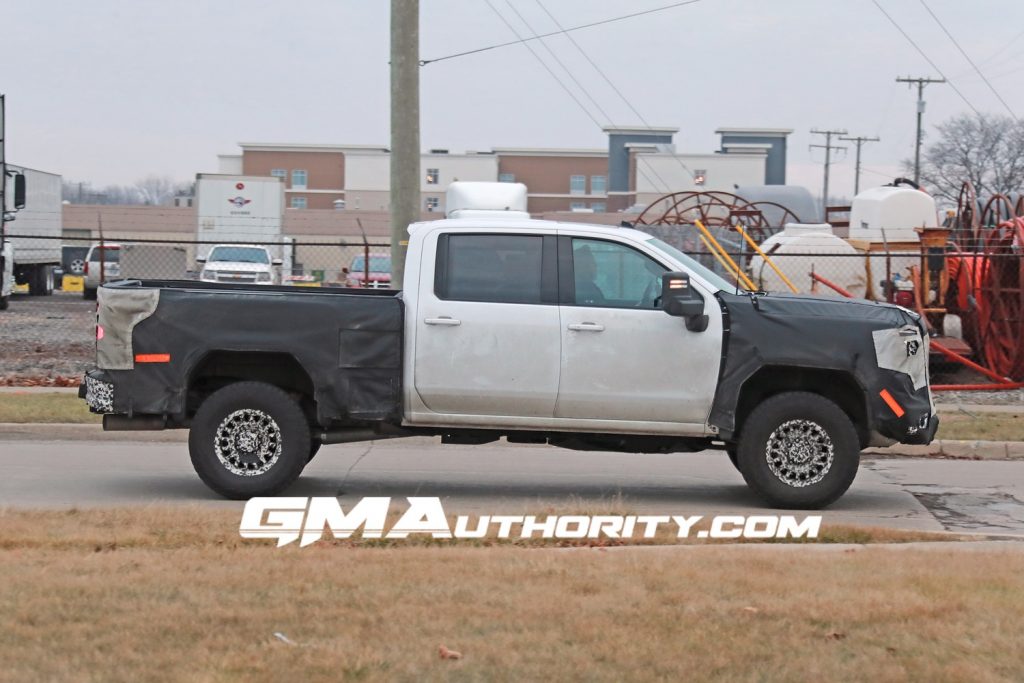 Though this prototype, which is the same unit our spies captured earlier this month, is clad in heavy camouflage, making it difficult to discern design specifics, we can clearly see that the doors are filthy, indicating that GM has been testing the heavy duty pickup for a while now. There’s also a set of camouflage on the wheels, indicating that the Sierra HD AT4X will feature a unique set of rollers. 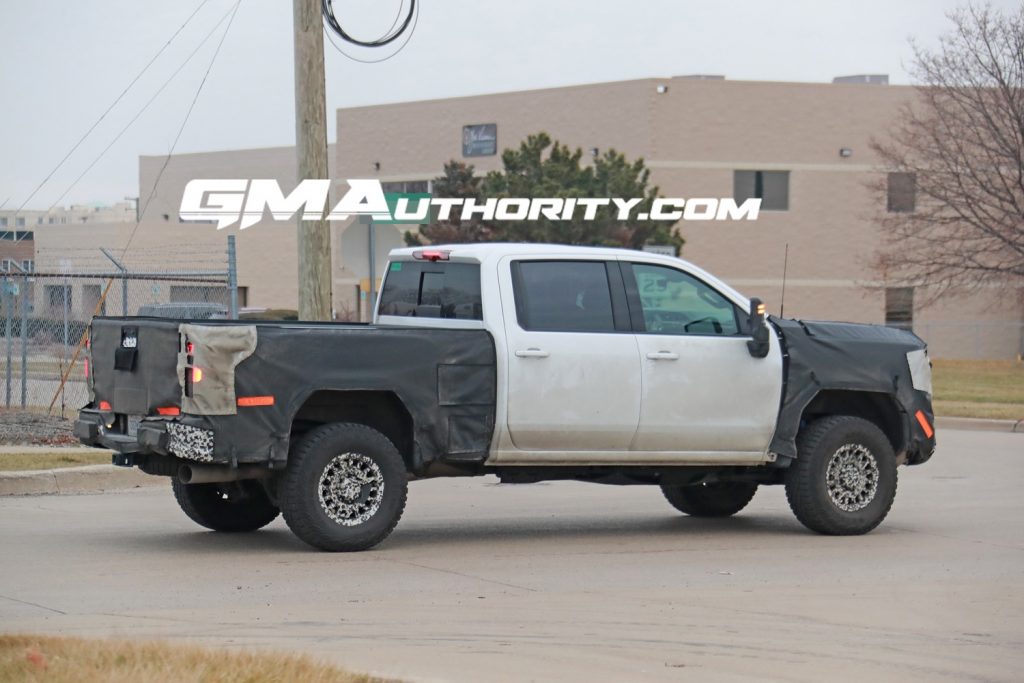 As a reminder, the refreshed 2024 Sierra HD lineup is highlighted by the introduction of the uber-luxurious Denali Ultimate trim level. This new range-topping trim features exclusive exterior accents and a unique interior colorway, along with the 6.6L L5P Duramax diesel engine as standard. 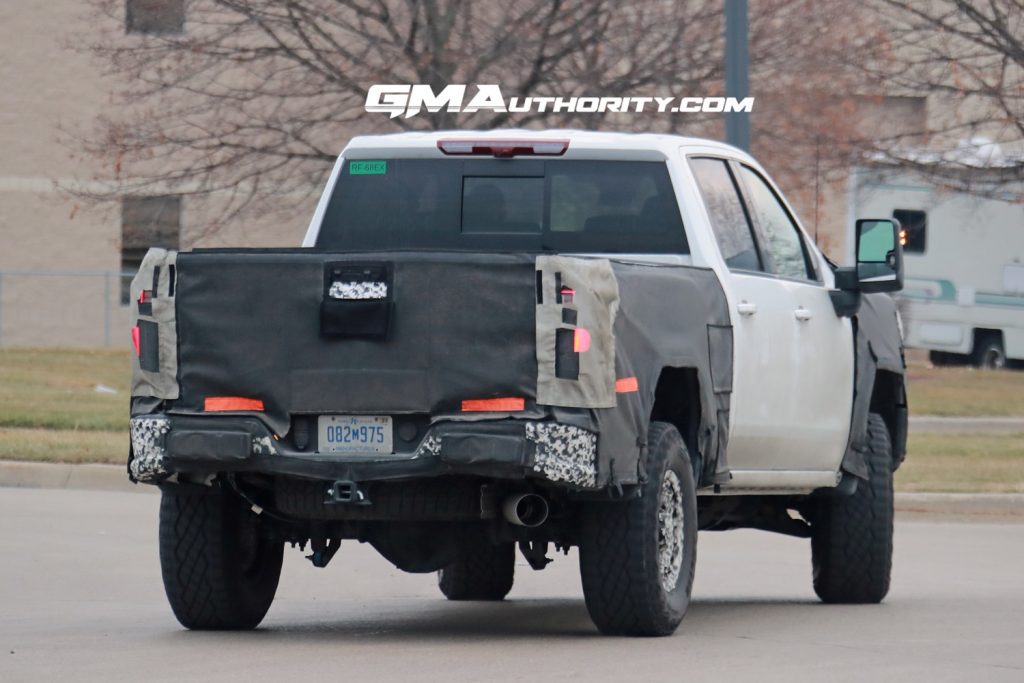 In regards to powertrain, the 2024 Sierra HD AT4X will be offered with two engine choices, including the naturally aspirated 6.6L L8T V8 gasoline engine, rated at 401 horsepower and 464 pound-feet of torque, and the 6.6L L5P V8 turbodiesel Duramax engine, which has been uprated to 470 horsepower and 975 pound-feet of torque. No matter the engine option, all Sierra HD models will be equipped with the Allison-branded 10-speed automatic transmission as standard affair.

Under the skin, the 2024 Sierra HD will ride on the heavy duty variant of the GM T1 platform, while production is currently scheduled to begin in February 2023 at the GM Flint plant in Michigan. Notably, the HD AT4X will join the refreshed Sierra HD lineup later in the 2023 calendar year. In addition, pricing for the HD AT4X has yet to be announced by GM.