During the 1980s and 1990s, the look and performance of Cadillac would change greatly. Reductions in size would continue, a compact sedan based on the Chevy Cavalier would prove a disappointment, and a competitor for the Mercedes-Benz SL convertibles would arrive with fresh Italian styling. A new engine platform would be the standard of performance in Cadillac coupes and sedans, and in the late-1990s, SUVs would enter the Cadillac lineup, as luxurious family-haulers would come into demand.

The Seville was redesigned for 1980, featuring an all new “bustle-back” and a switch to the Eldorado’s front-wheel-drive chassis. 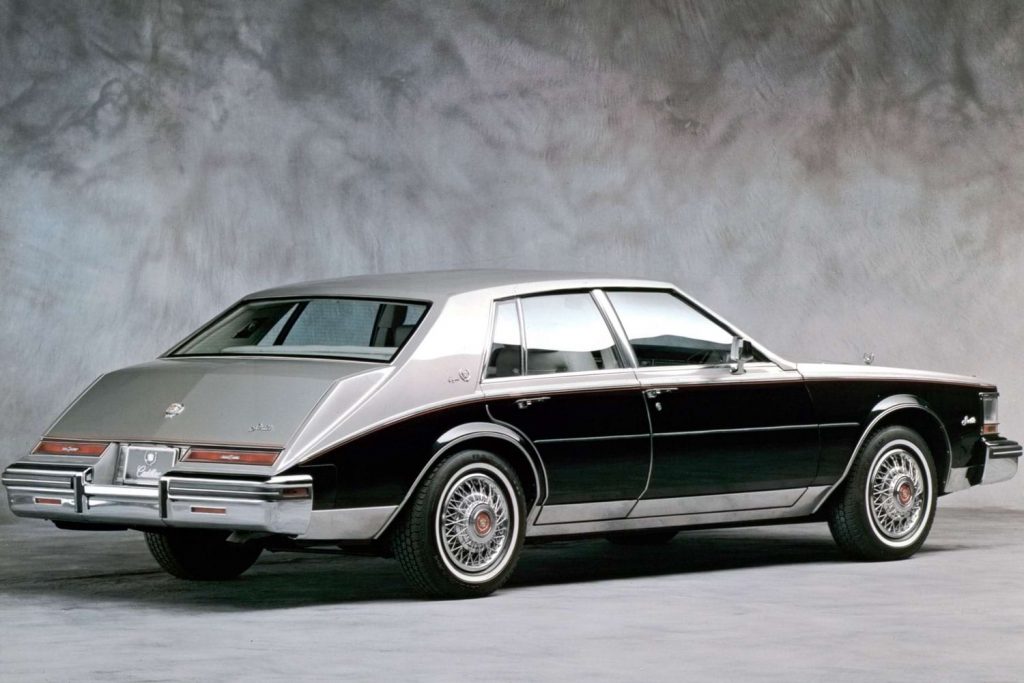 Standard digital heat and air conditioning controls were introduced to all Cadillac models in 1981.

The Cadillac Cimarron was introduced in for the 1982 model year. Based on the Chevy Cavalier, the Cimarron was poorly received by the Cadillac faithful. Auto journalist Dan Neil listed the Cimarron as one of the “worst cars of all time,” adding it “nearly killed Cadillac and remains its biggest shame.”

In 1983, Cadillac debuted the optional Delco/Bose stereo system. The cassette stereo was priced at $895, and was only available on Eldorados and Sevilles. It would not be available in DeVilles and Fleetwoods until 1985. 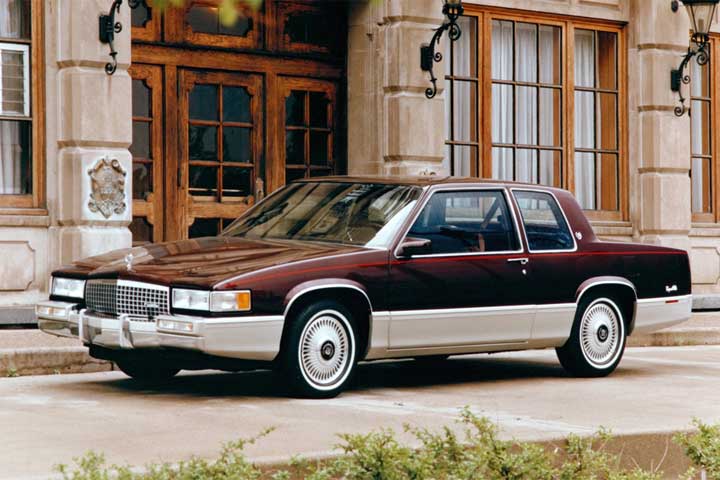 The 1985 Cadillac DeVille was transformed with a transverse-mounted front-wheel-drive configuration, the first for any American manufacturer. Digital instrumentation was introduced on DeVilles and Fleetwoods in 1985.

Redesigned for 1986, the Eldorado and Seville models were much smaller in dimension and stature. Both were powered by transverse-mounted 4.1-liter V8s.

The Pininfarina-bodied Cadillac Allanté debuted for the 1987 model year, with bodies shipped from Italy to the U.S. for final assembly. The Mercedes SL competitor was powered by the transverse-mounted HT-4100 V8. 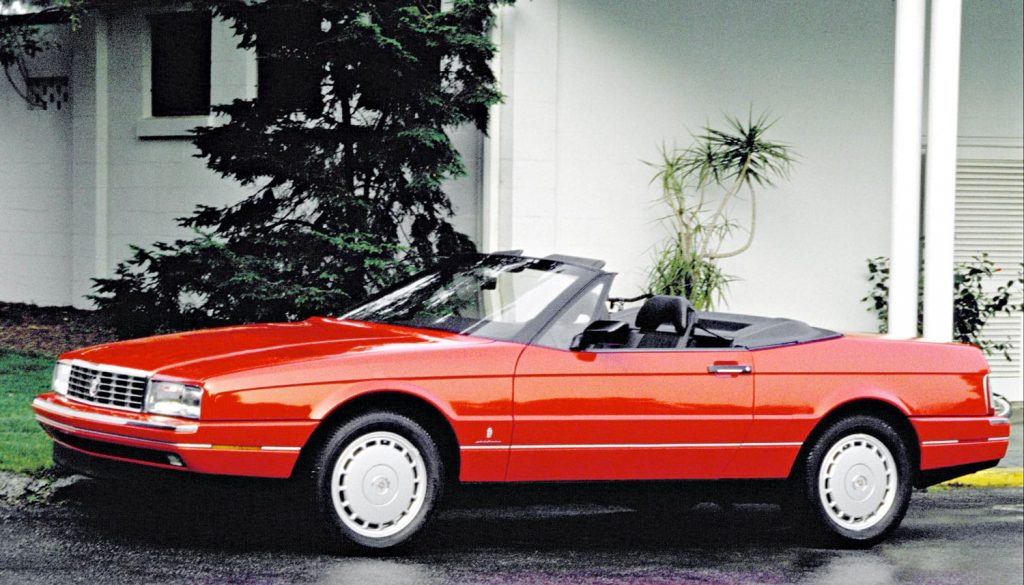 Cadillac’s Detroit, Michigan Clark Street assembly plant, which had been in service since 1921, was shuttered in 1987.

Traction control was available for the first time on the 1990 Cadillac Allanté.

Cadillac made history in 1991 with the introduction of the Northstar engine. Originally developed by Oldsmobile, the high-performance 4.6-liter 90-degree V8 was General Motors’ most complex engine, featuring aluminum block and heads,  double-overhead cams, and four valves per cylinder.

Beginning in mid-1992, Cadillac introduced the Northstar engine as part of the Northstar System that included variable valve timing, suspension that “read the road,” four-wheel disc brakes, and variable power steering. The 1992 Seville was redesigned with some styling elements lifted from the 1988 Cadillac Voyage concept. The new Seville made Car and Driver magazine’s Ten Best list. 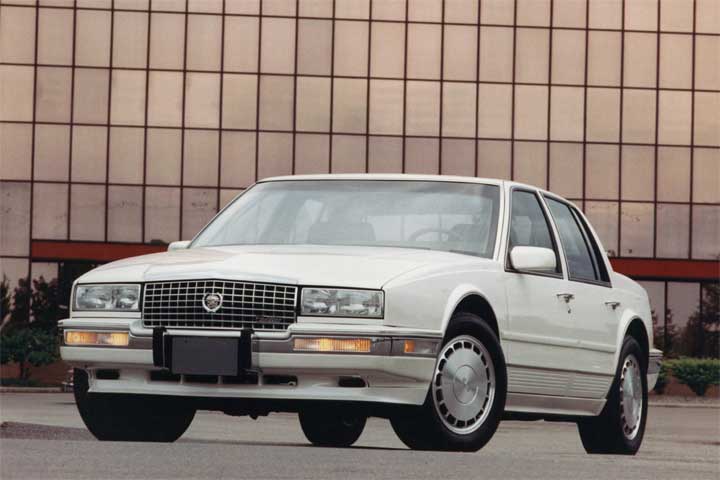 The Northstar engine was available in the Cadillac Allanté for its final year of production in 1993. Freshly redesigned for 1993, the all-new rear-wheel-drive Cadillac Fleetwood replaced the aging Brougham. The front-wheel-drive Fleetwood from previous years was renamed the Sixty Special. 1993 was the final year for Coupe DeVille production.

The High Technology (HT) engine line that had been in production since 1982 was discontinued in 1995. 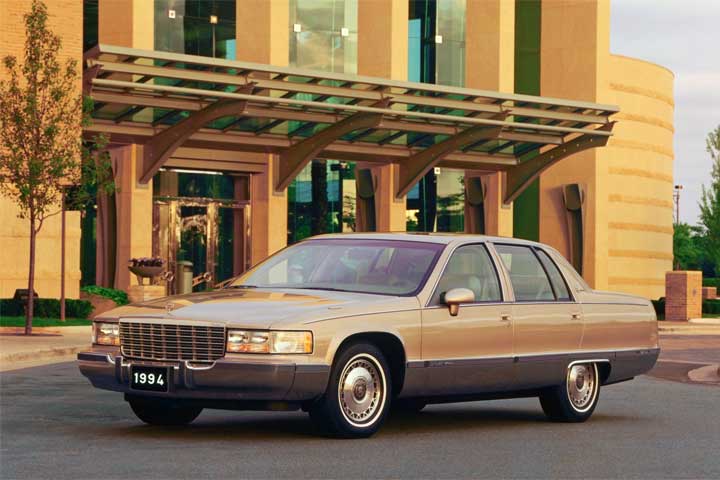 Continuously Variable Road Sensing Suspension, or CVRSS, was introduced in 1996, as was Magnasteer Speed Sensitive Steering.

The OnStar Vehicle Safety and Security System was introduced as an available option on all Cadillacs for 1997, and StabiliTrak was available for Sevilles, Eldorados, and DeVilles.

Along with a restyling in for the 1997 model year, the DeVille introduced a standard SRS passenger’s-side front airbag, as well as new stereo systems, and the TheftLock security system. 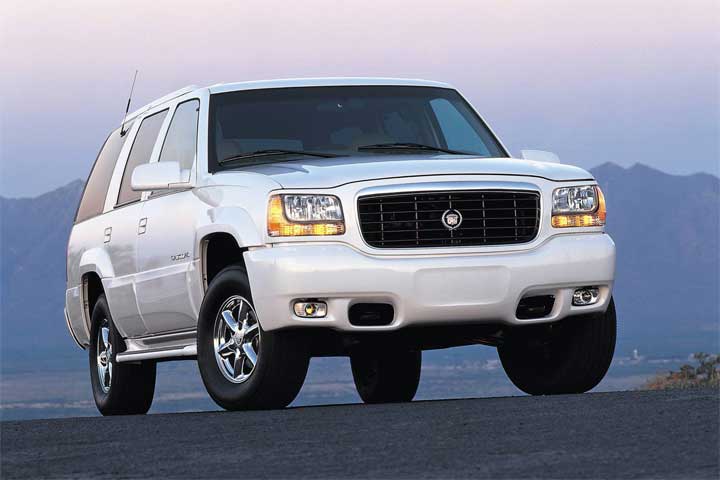 The entry-level Cadillac Catera sedan debuted for the 1997 model year. Aimed at mid-size European marques, the Catera was itself European, a rebadged Opel Omega built in Russelsheim, Germany.

The Chevy Tahoe-based Cadillac Escalade bowed for the 1999 model year as a direct competitor for the Lincoln Navigator. Massaging lumbar seats are available for the first time in select Sevilles, DeVilles, and Eldorados.

There was little in the Cadillac lineup that looked anything like the models of just two decades ago. Technology, styling, and performance would launch Cadillac into the new millennium.