The 1960s and 1970s would see yet another wave of innovations, technology, luxury, and excess for Cadillac.

In 1960, Cadillac introduced self-adjusting brakes. In addition, 1962 was a banner year for Cadillac safety and comfort advancements. Brake master cylinders switched to a dual reservoir system with separate hydraulic systems for front and rear brakes, some six years ahead of federal regulation. The three-speed Turbo Hydra-Matic automatic transmission debuted, and would remain a fixture at GM for years to come.

For the 1964 model year, Cadillac debuted fully automatic heat and air conditioning, called Comfort Control, a first for the auto industry. Front seat belts became standard, and Twilight Sentinel, which activated headlights at night and turned them off during the day, became available. 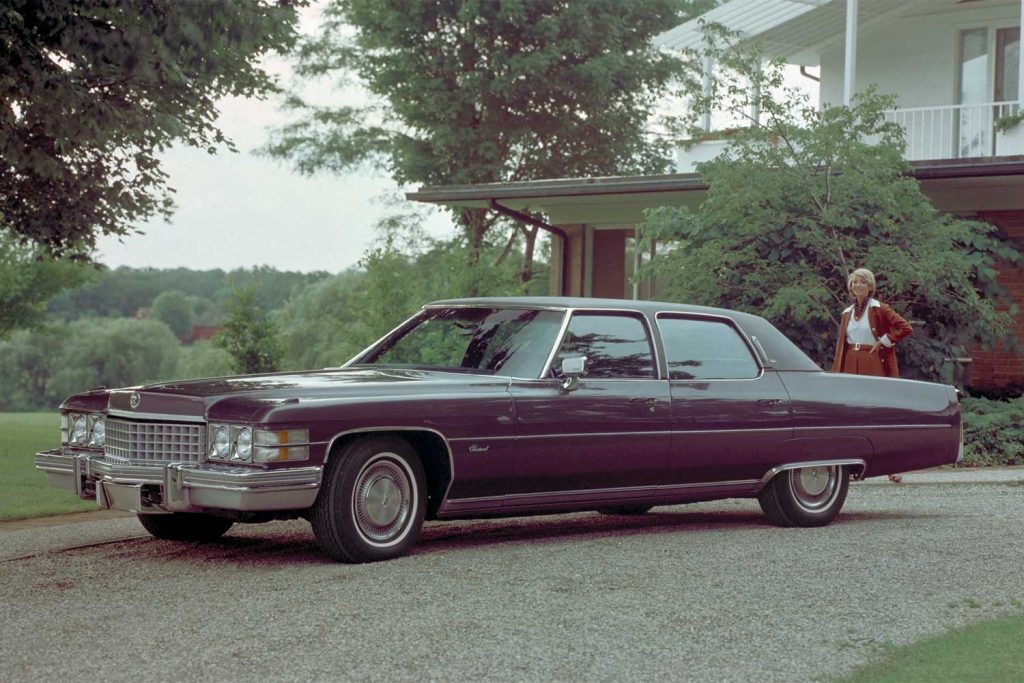 The 1965 model year continued the addition of luxury features to the Cadillac line. Tilt-telescopic steering was available for the first time, as were automatic load-leveling Delco Superlift rear shocks.

The front-wheel-drive Cadillac Fleetwood Eldorado hardtop personal luxury car debuted for the 1967 model year. The design was clean and elegant in its simplicity. Front-wheel drive allowed for nearly flat floors in the cabin. 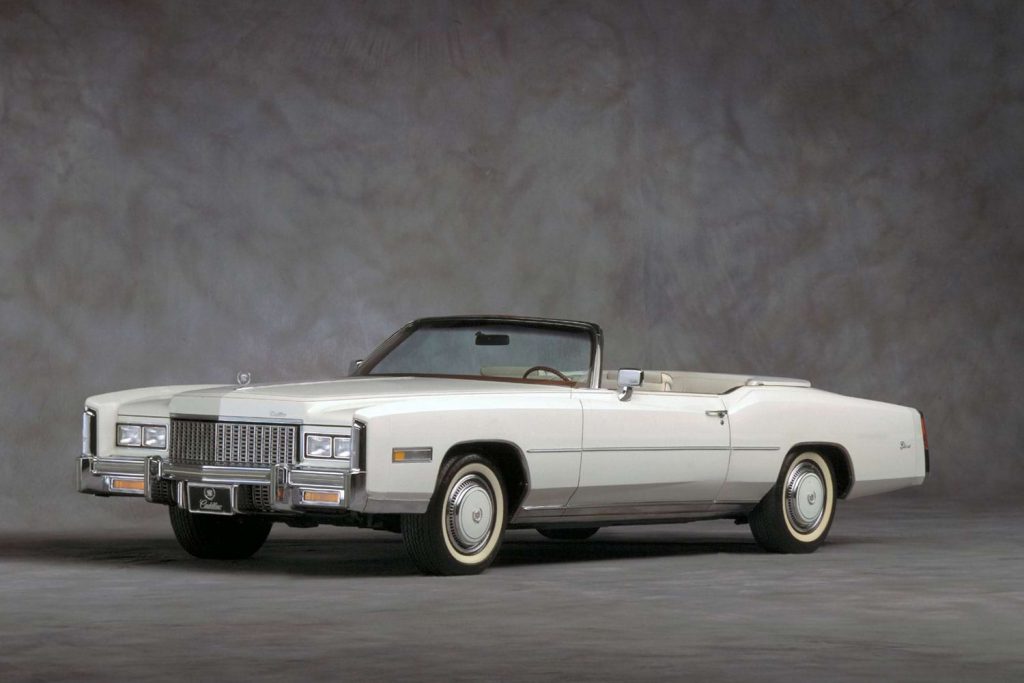 1968 was marked by the addition of numerous federally mandated safety traits, including side-marker lights, front shoulder belts, soft instrument panel knobs and interior surfaces, and an energy-absorbing steering wheel and column. The Cadillac 472 cubic-inch V8 bowed for 1968. Sales for the brand topped 200,000 cars for the first time.

For the 1970 model year, displacement was increased in the Cadillac Eldorado to a massive 500 cubic inches that delivered 400 horsepower. In 1971, Cadillac debuted the first computer-controlled rear anti-lock brake system as optional equipment.

The early 1970s saw Cadillac models grow in size and optional luxury equipment. The 1972 Cadillac Fleetwood’s wheelbase increased 1.7 inches, with overall length swelling by four inches. The Calais was 2.4 inches longer. Smoother ride was a hallmark of the 1972 Caddies, with engine displacement, standard equipment, and weight all on the rise. 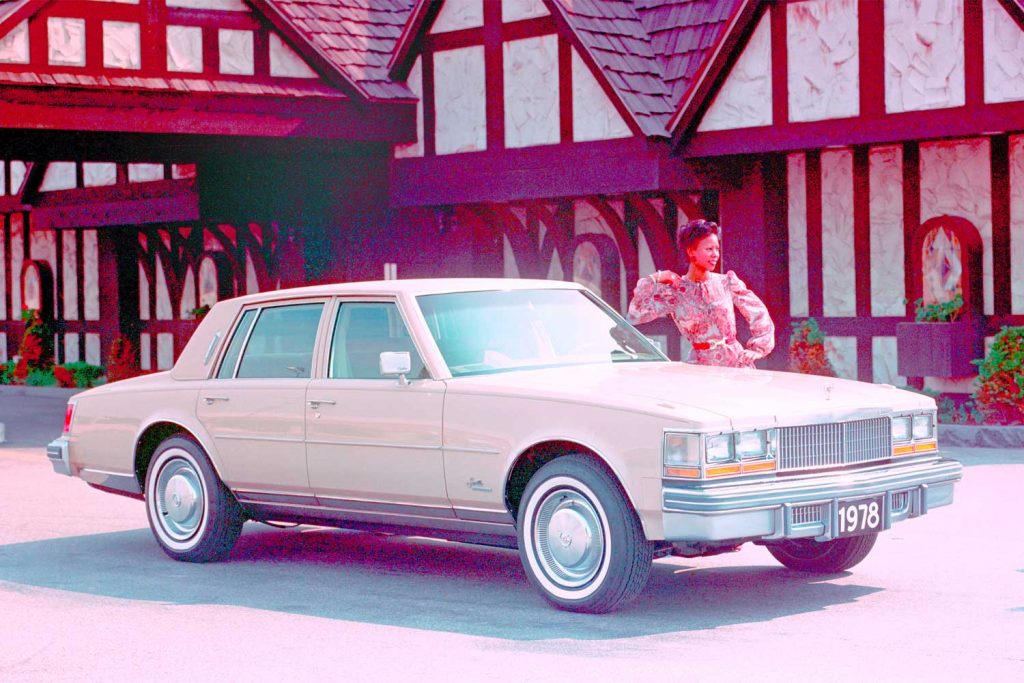 1973 saw record sales for Cadillac, just ahead of the 1974 introduction of Air Cushion Restraints (air bags) being introduced to protect drivers in the event of a frontal collision. In 1975, Cadillac became the first U.S. auto manufacturer to utilize electronic fuel injection. The 500 cubic-inch V8 was adopted across the Cadillac model range. In May of 1975, the range-topping mid-size 1976 Cadillac Seville was introduced as a competitor to European luxury marques. The optional Air Cushion Restraint System was dropped in 1976 due to lack of demand.

Cadillac celebrated its 75th anniversary in 1977. As General Motors downsized all of their B-, C-, and D-body cars, this meant the Fleetwood Brougham no longer had its unique longer wheelbase, riding on the shorter 121.5-inch platform shared with the DeVille. Both cars would be taller, shorter, narrower, but with more trunk space, leg room, head room, and were nearly 1,000 pounds lighter. Both came equipped with the 425 cubic-inch V8, a smaller bore version of the 500 cube monster, producing 180 horsepower. The cars were now differentiated only by exterior trim and interior appointments. Sales figures for Coupe DeVille and Sedan DeVille models topped 234,000. 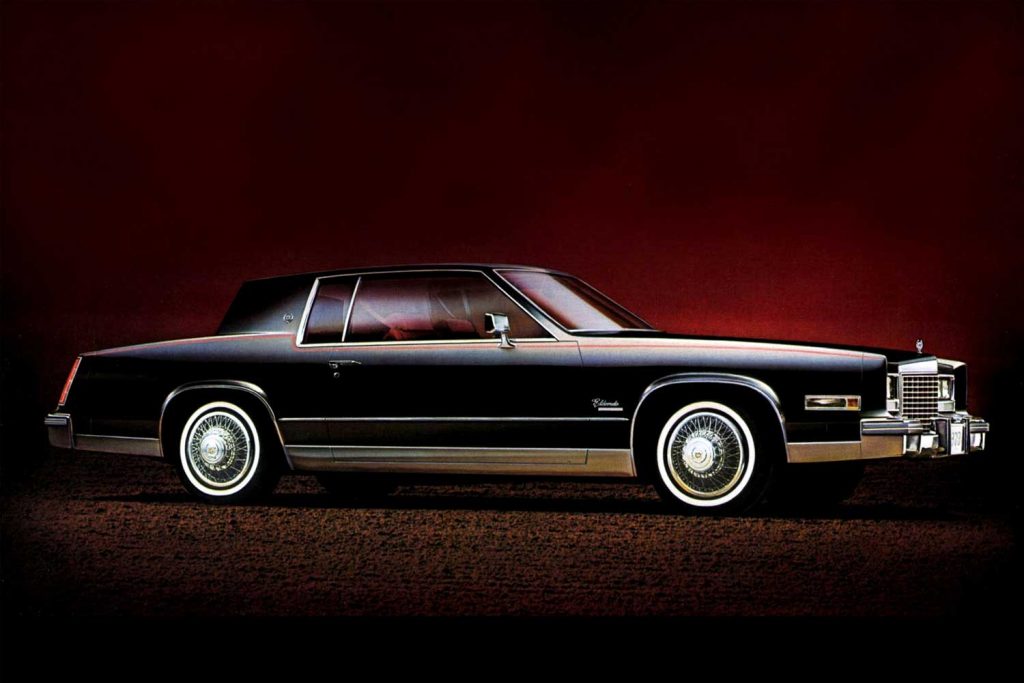 Cadillac introduced a digital trip computer for the 1978 Cadillac Seville. The 1979 Cadillac Eldorado would be the next model put on a diet in order to conform to federal emissions and economy standards. 1979 was also the best sales year in Cadillac history with the brand capturing four percent of the new-car market, with more than 345,000 Caddies finding new homes.

The next decade would see reductions in size and displacement throughout the Cadillac line, new technologies, and the addition of a poorly received compact based on the Chevy Cavalier.