The 1958 Chevy Corvette received the second major facelift of the first-generation Corvettes. There were now two horizontally-arranged headlights per side, and the number of heavy chrome “teeth” in the grille numbered nine rather than the previous year’s thirteen. The side coves now had diagonal dummy vents in them with three chrome horizontal spears arcing from them. Cross-flag emblems were mounted in the center of the coves just aft of the front wheel opening. Twin chrome trunk irons ran down the trunk, but would only be there for 1958. Another exterior styling detail that would last just a year was the simulated hood louvers “washboard” on the hood that was initially intended to be functional, but never came to fruition. 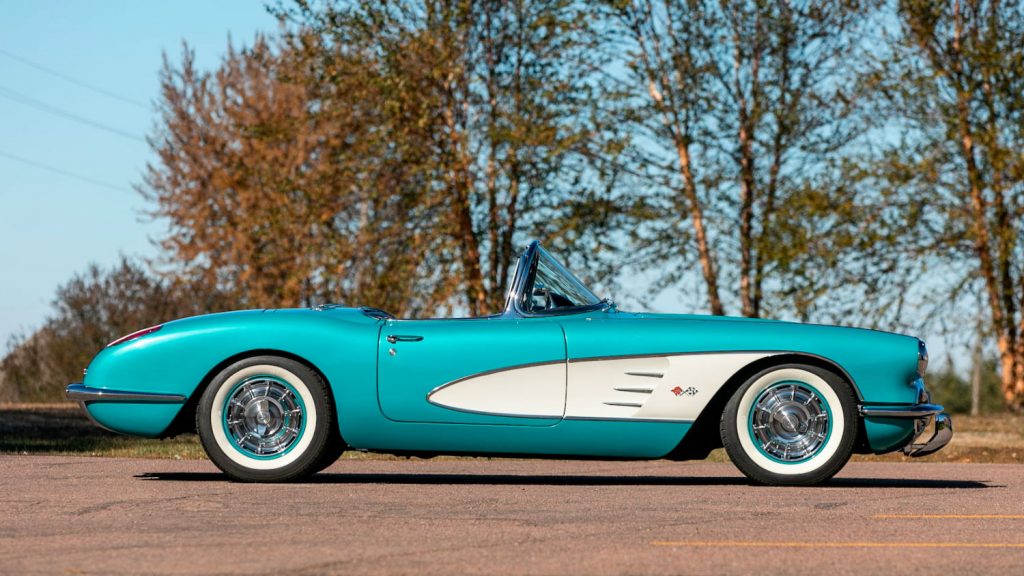 The 1958 Chevy Corvette dash had changed as well, with a large-radius 160-mph speedometer directly in front of the driver, with the tach relocated from the center of the dash to just above the steering column. The other gauges had been moved from the center of the dash to flank the steering column on either side, with the fuel and temp to the left of the column, and the oil and battery to the right. The passenger side of the dash had a grab bar with a curved, anodized trim piece, along with CORVETTE lettering in the dash just forward of the bar. A parcel tray just beneath the grab bar would come the following year. Seat belts were factory installed for the first time, as they had been dealer installed in previous years. 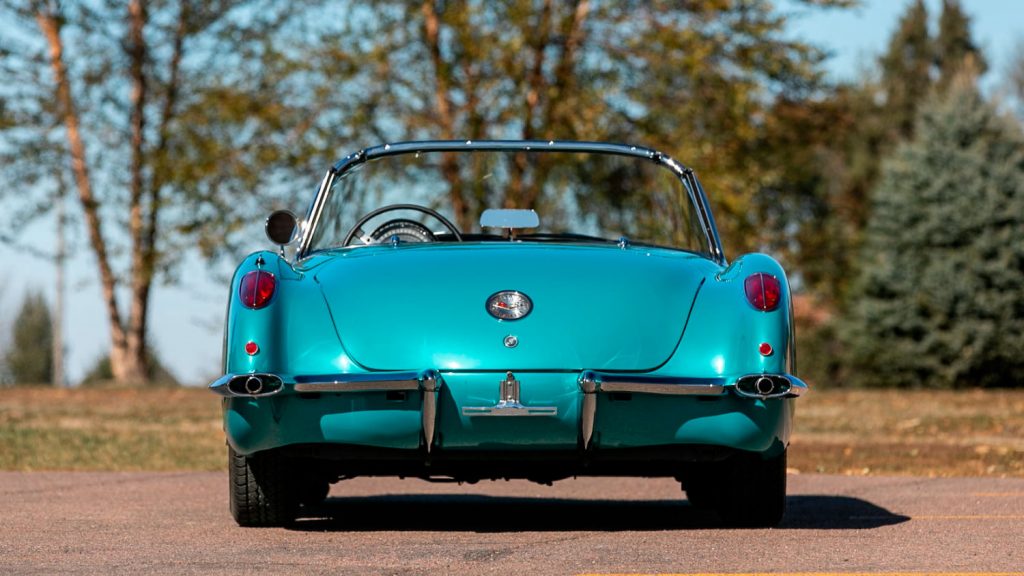 Engine choices for 1958 were all 283 cubic inches, but differed in horsepower and fuel delivery. The base engine came with a single four-barrel carb, made 230 horsepower, painted valve covers, and was backed by a three-speed manual transmission. An optional four-speed manual and a two-speed Powergilde automatic were available. Other engine options included seven-fin aluminum valve covers, and the selection of a dual-four-barrel 283 making either 245 or 270 horsepower, and you could choose either of two Rochester mechanical fuel-injection engines rated at 250 or 290 horsepower. The 270-horsepower carbed and 290-horsepower fuel-injected engines required manual transmissions. 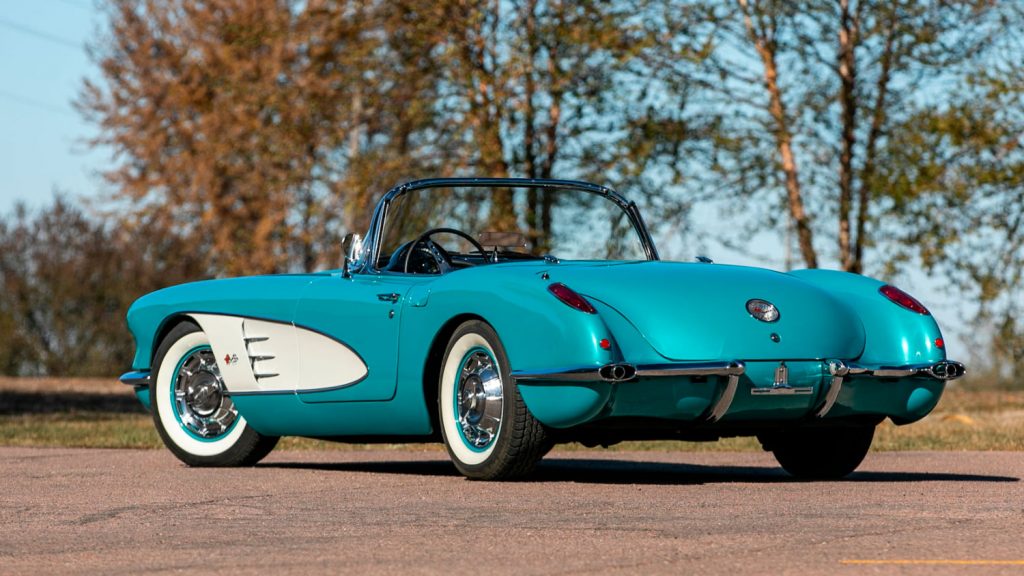 There were a handful of subtle changes for the 1959 Chevy Corvette. As previously mentioned, the “washboard” on the hood went away, as did the chrome strips down the trunk. A parcel tray was added beneath the passenger side grab bar. More arm room was gained by relocating the armrests and door handles. The instruments were slightly redesigned to be more legible. The four-speed manual transmission had a T-handle reverse gear lockout added. The pebble-grained vinyl from the previous year was smoothed. 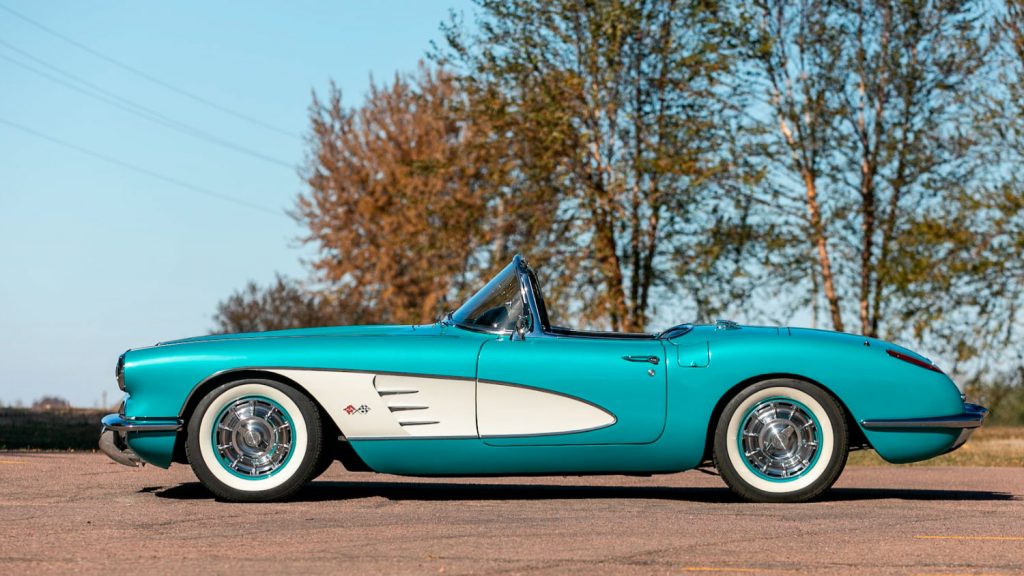 For 1960, not much was changed. Seat pleats were changed from horizontal to vertical, and the CORVETTE script above the parcel tray had a red bar added above, and a blue bar below. The front sway bar was thicker on the 1960, and a rear sway bar was added. Despite early advertising that claimed a 315-horsepower fuel-injected engine would be offered, problems with casting the high-silicon-content aluminum heads meant only the 290-horsepower version made it to production. The high-performance 270- and 290-horsepower engines came with aluminum radiators. 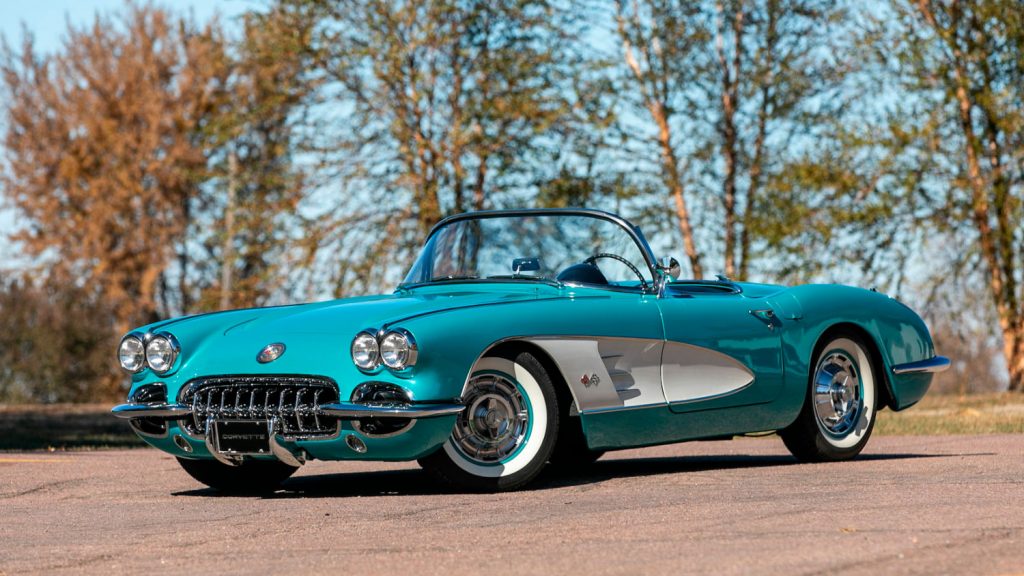 Our feature 1960 Chevy Corvette is finished in rare Tasco Turquoise, a one-year-only color of which only 635 left the factory. The contrasting side coves are finished in Ermine White. The paint is shiny and brilliant in the sunlight. Chrome and stainless trim are both well-polished. The headlight bezels don’t quite meet flush with the fender spears, a common failing on this vintage. Turquoise painted steel wheels wear correct slotted hubcaps and are wrapped in wide whitewall radial tires. Aftermarket chrome exhaust tips protrude from the bumper exhaust outlets. The car sits a bit low on its springs. A black soft top is fitted, but not present in any of the photos. 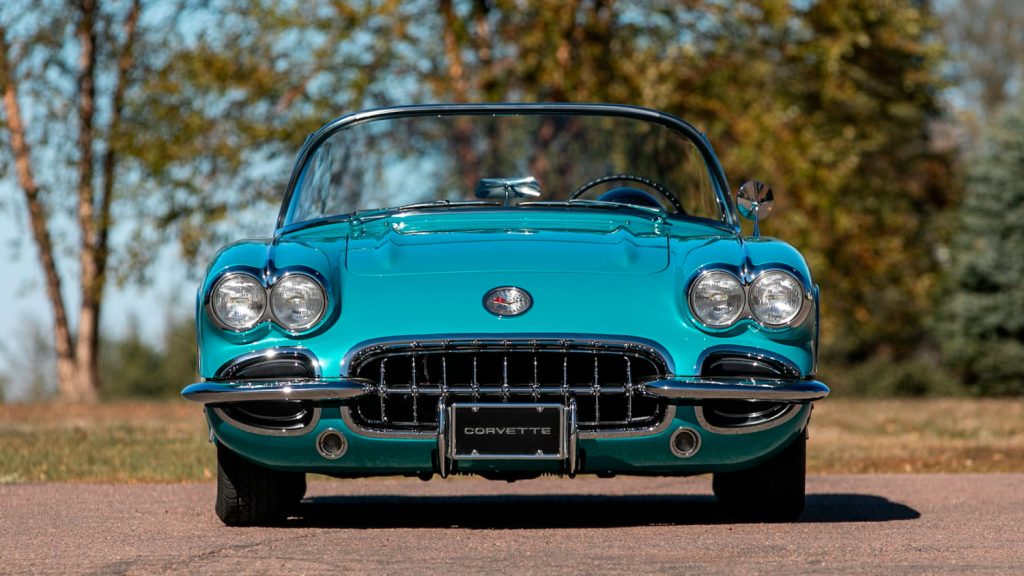 Inside, the Chevy Corvette is finished in black vinyl with black loop carpet. Seat covers appear recent, and the carpet shows no stains or snags. The seat belts are generic replacements, as the original units were made by Irving Air Chute and had a flap-style release. The steering wheel appears to be a replacement. The Corvette is equipped with a factory courtesy light and an aftermarket stereo. 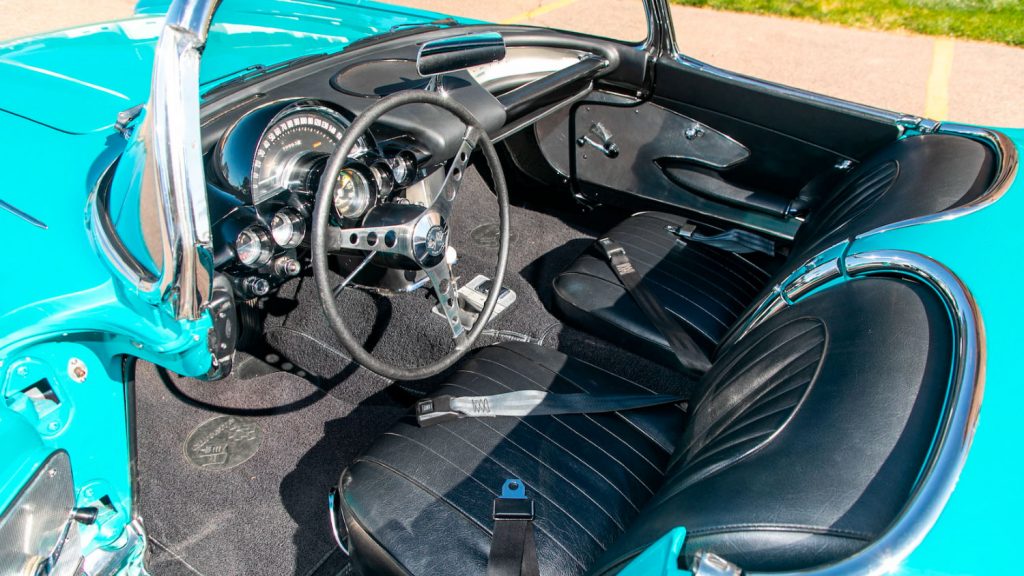 Under the hood of the Chevy Corvette is the numbers-matching 283 rated at 230 horsepower and fed by a single four-barrel carb. The original painted valve covers have been replaced with the finned aluminum covers used on higher power engines. The ignition shielding is missing, the brake master cylinder has been replaced by an aftermarket unit, as has the radiator cap. The engine bay could stand a bit of detailing. 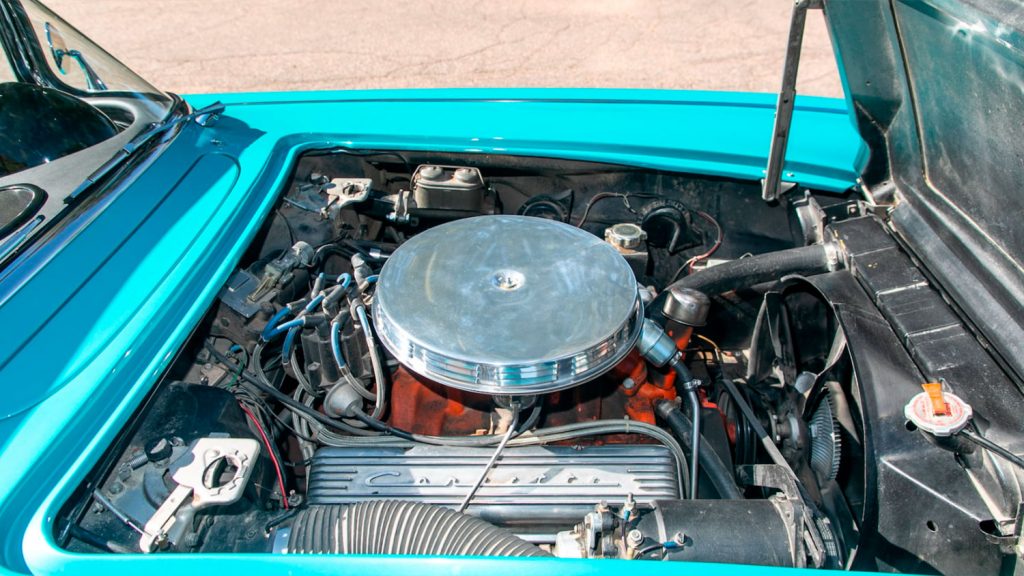 This 1960 Chevy Corvette will cross the Mecum Auctions block at their Kansas City event taking place December 1st through the 3rd. 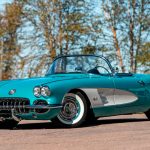 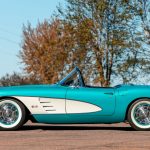 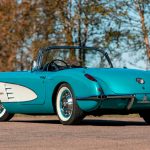 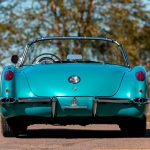 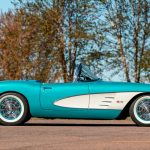 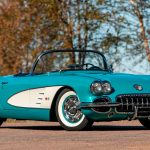 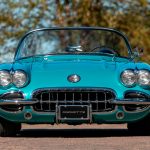 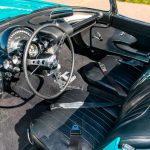 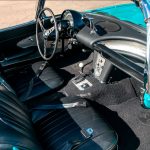 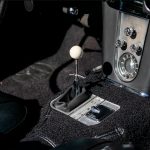 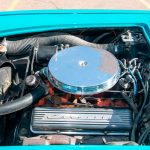 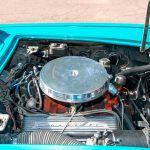