The Pontiac Catalina was originally the top trim level used on the 1950 Pontiac Chieftain hardtop. The Catalina name came from the practice of naming cars for beachside towns such as Bel Air, Ventura, Malibu, and Catalina. The moniker was later applied to the 1954 Pontiac Star Chief, Pontiac’s version of the Chevy Bel Air. These “hardtop convertible” corporate cousins shared pillarless styling, an airy, open feeling, and top-of-the-line appointments. 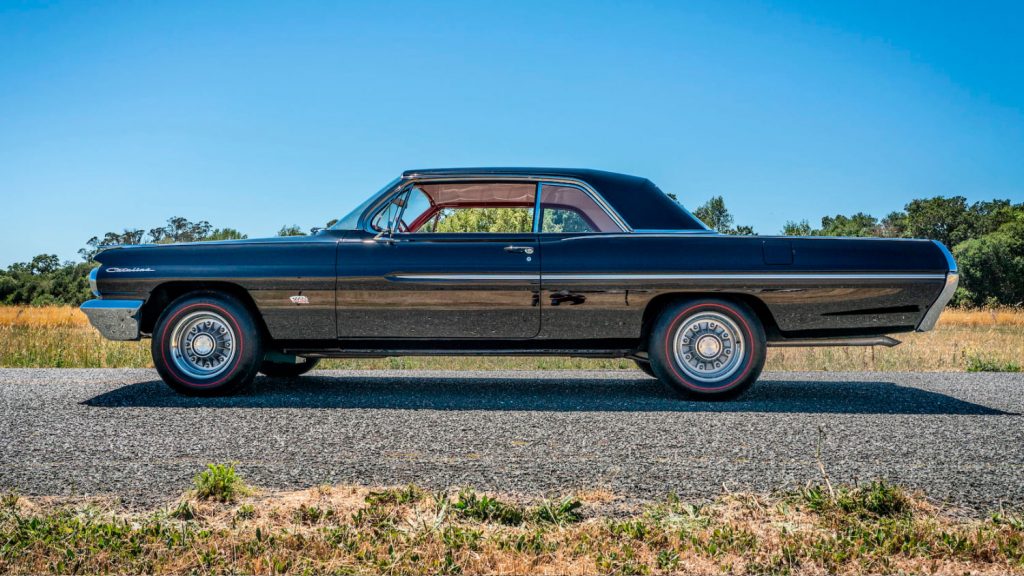 Pontiac dropped the Chieftain and Super Chief model names for the 1959 model year, replacing those with the Pontiac Catalina moniker. The Catalina was built on General Motors’ new B-body platform that combined the previous A- and B-Bodies. The new body had thin roof pillars, wraparound windshields, and lots of glass for better visibility. Pontiacs featured a split grille with mirrored horseshoe-shaped halves that contained horizontally-arranged dual headlights at the outer edges. 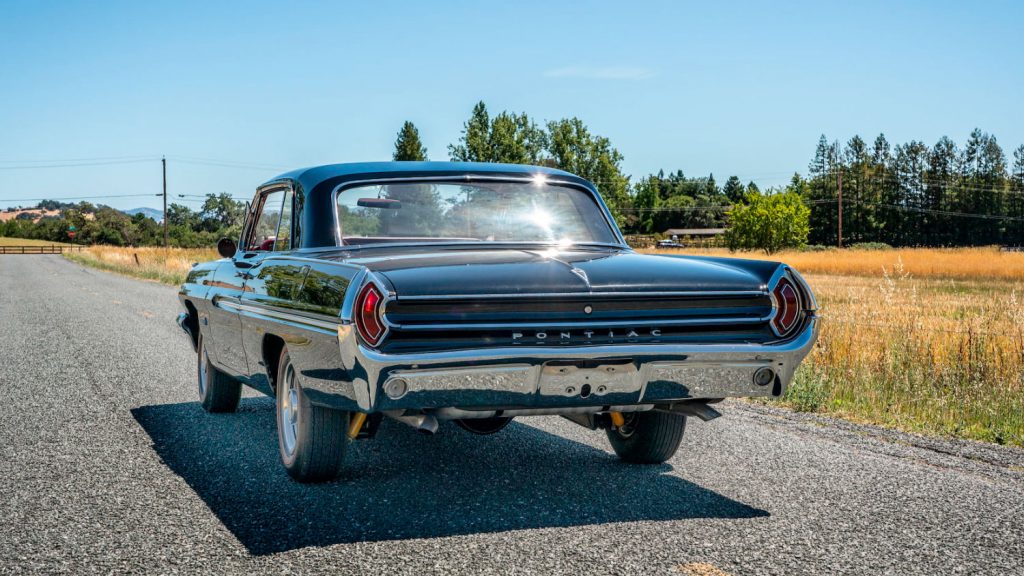 The Pontiac Catalina was the most modestly priced full-size Pontiac, but had a wide-ranging list of available amenities. Standard equipment included Morrokide vinyl and cloth or full Morrokide upholstery, cigar lighter, dual front ashtrays, and a glovebox snack bar (a couple of cup indents on the inside of the glovebox door that could hold drinks when open). Though rubber mat floor coverings were standard, the Catalina could be had with full carpeting. Other available options included a heater/defroster, glovebox and trunk lights, the “decor group” that got you chrome trim on your foot pedals, deluxe steering wheel, and full wheel covers. 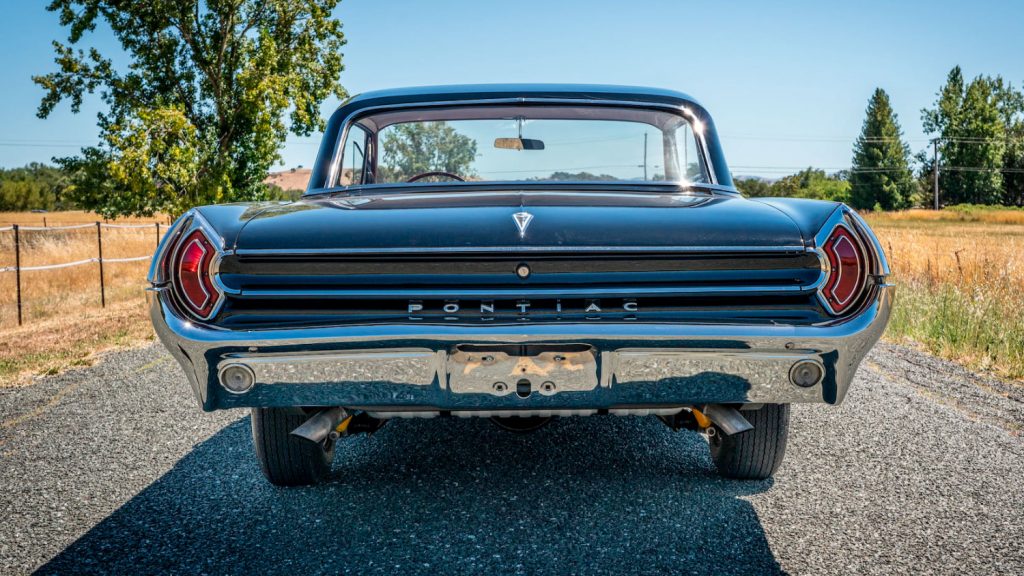 The Pontiac Catalina was powered by the 389 cubic-inch V8 that made 215 horsepower and was backed by either a three-speed manual or four-speed automatic transmission. The Catalina differed from its GM corporate counterparts in that it had a five-inch wider chassis, pushing the wheels outward, improving not only appearance, but ride and handling. This gave birth to Pontiac’s “Wide Track” marketing that would be used for years after. 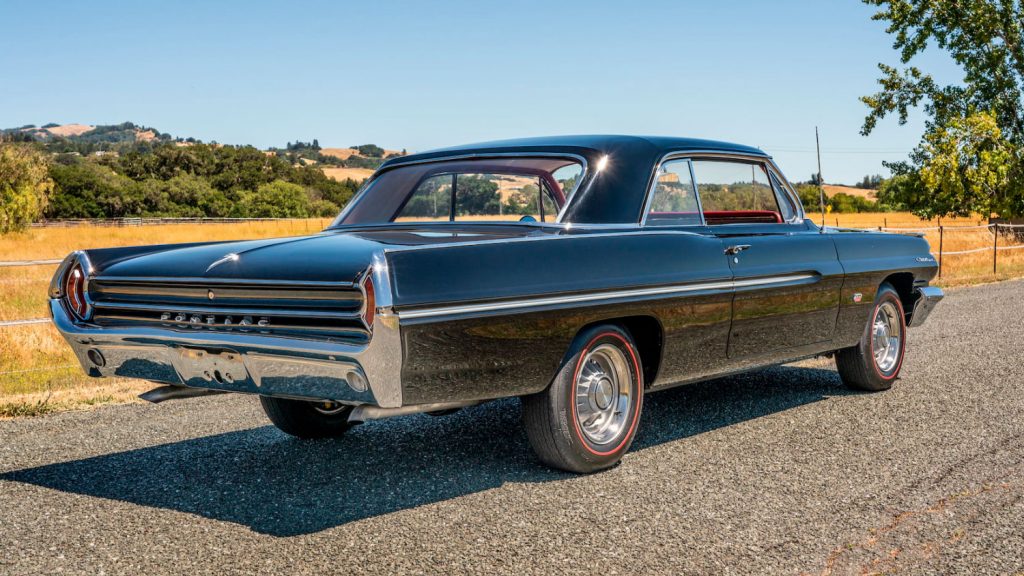 For the 1961 model year, the Pontiac Catalina would be completely restyled, with sharper lines and the Torque Box perimeter-style chassis that allowed for more interior room and better side-impact protection. Bodies were marginally smaller and lighter, the wheelbase was three inches shorter as was the overall length. Width was also reduced, coming in at two inches narrower. The roofline was more squared on sedans, while two-doors had slightly more rounded tops. Windshields were flatter than the previous year. 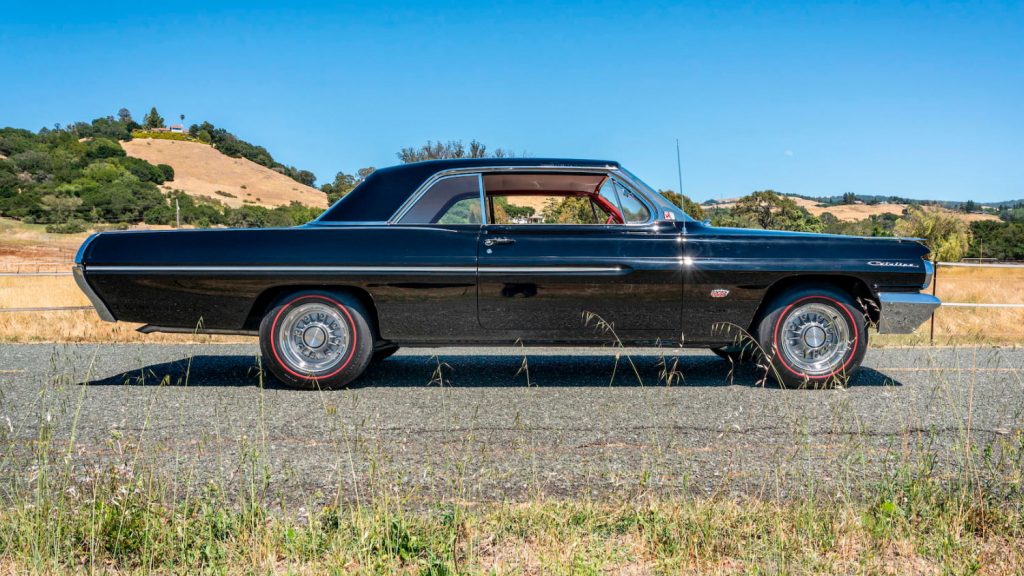 The 1961 Pontiac Catalina was powered by the tried-and-true 389 cubic-inch V8. The standard 389 was topped by a two-barrel carb and rated at 215 horsepower paired with a three-speed manual or Hydramatic automatic transmission. Optional engines could be had in 267-, 303-, 318-, 333- and 348-horsepower configurations, all with differing carb setups and compression ratios. There was even a 363-horsepower engine that was available for competition use. Toward the end of the model year, a 421 Super Duty was made available as a dealer-installed option. 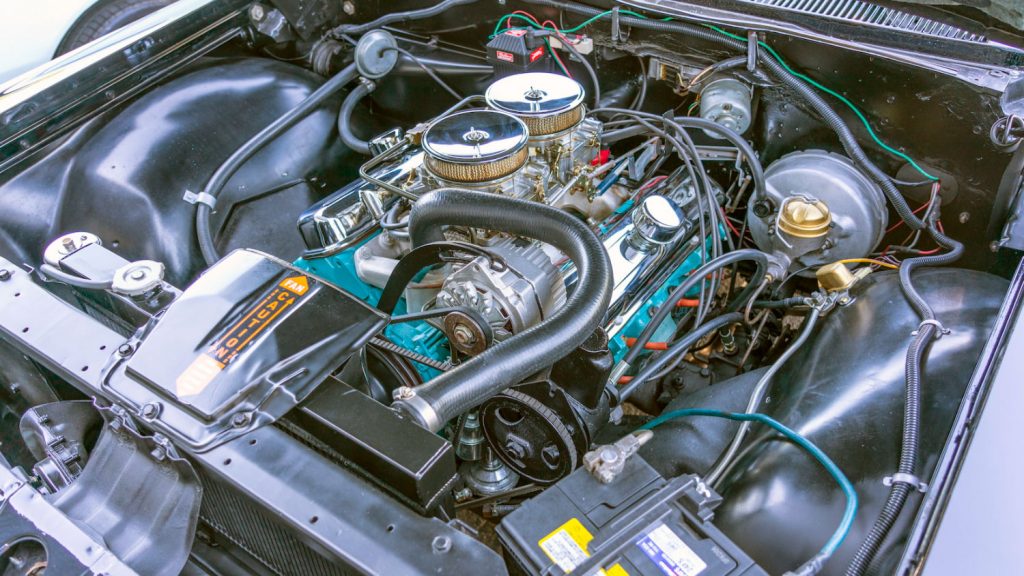 The 1962 Pontiac Catalina saw some significant styling changes, with some of the lines rounded and softened. Hardtops and sedans grew an inch in wheelbase. A sportier version of the Catalina called the Grand Prix was introduced to the lineup. Most of the engine options from the previous year were carried over.

Our feature 1962 is finished in shiny Starlight Black over a tri-color Morrokide interior. Chrome and stainless both gleam in the sunlight. Panel gaps appear fairly consistent. The tri-color interior is a show unto itself, with deep red, bright red, and white accented with the Pontiac “V.” Carpets appear recent, the dash is crisp with legible gauges, and the chrome tach is mounted on the steering column. The four-speed floor shift is topped with an H-pattern shift ball. 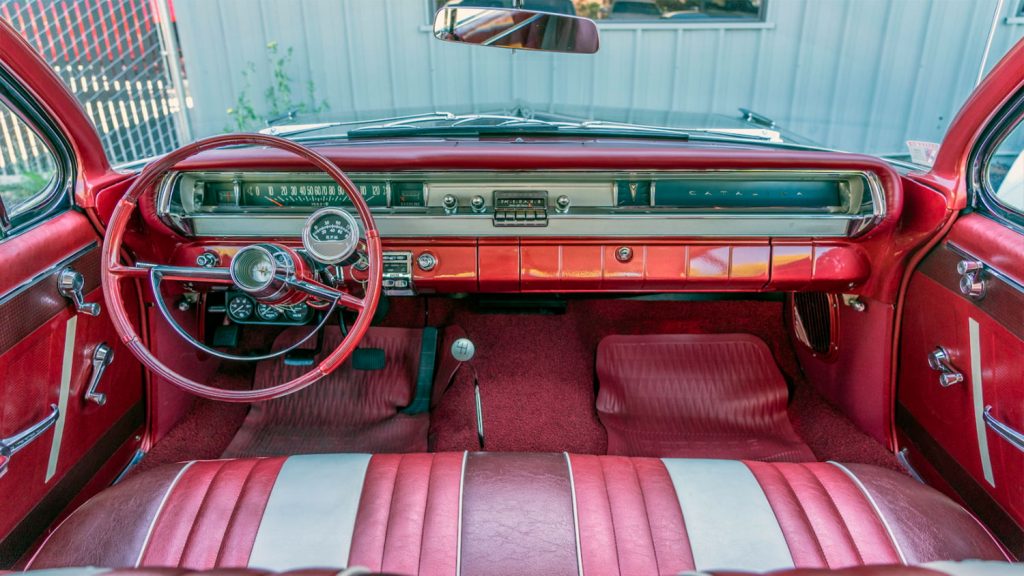 This Pontiac Catalina is powered by a replacement Pontiac 428 cubic-inch V8 that has been bored and stroked, and is topped by dual four-barrel carbs. The engine is dressed in Super Duty exhaust manifolds, two-and-a-half inch exhaust, and is said to put out 420 horsepower. The 428 is backed by a Richmond Super T-10 four-speed manual transmission that feeds power to a Positraction rear differential. The Catalina rides on eight-lug wheels wrapped in redline bias-ply tires. 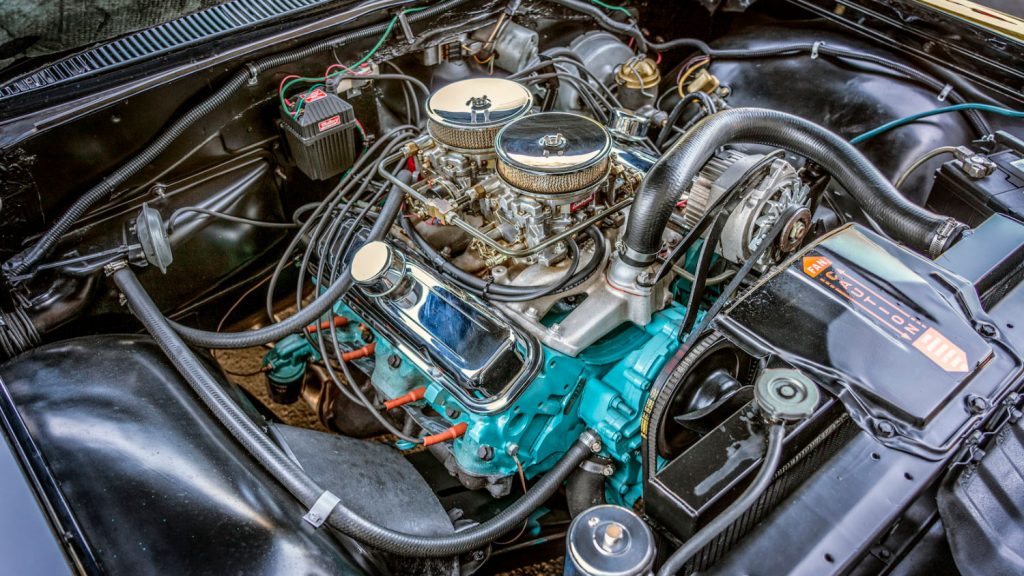 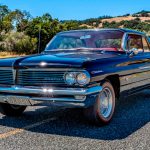 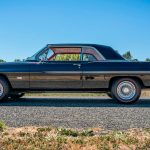 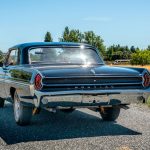 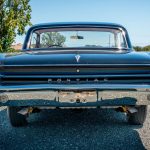 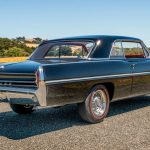 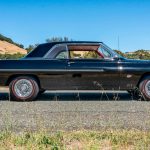 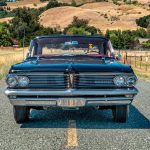 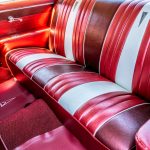 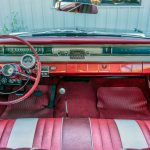 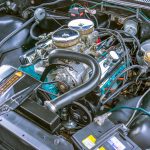 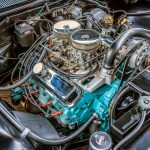