Last month, GM revealed the refreshed 2024 Chevy Silverado HD, which brings an updated exterior, an overhauled interior, powertrain improvements, as well as capability gains. However, Chevy only showed off the range-topping High Country trim during the truck’s big debut. Today, we’re bringing you a glimpse of what appears to be a 2024 Silverado HD in Work Truck (WT) trim.

The truck seen in these photos is a Silverado 2500 HD with the Extended Cab and – as per the badges on the hood – the 6.6L V8 L5P Duramax diesel. 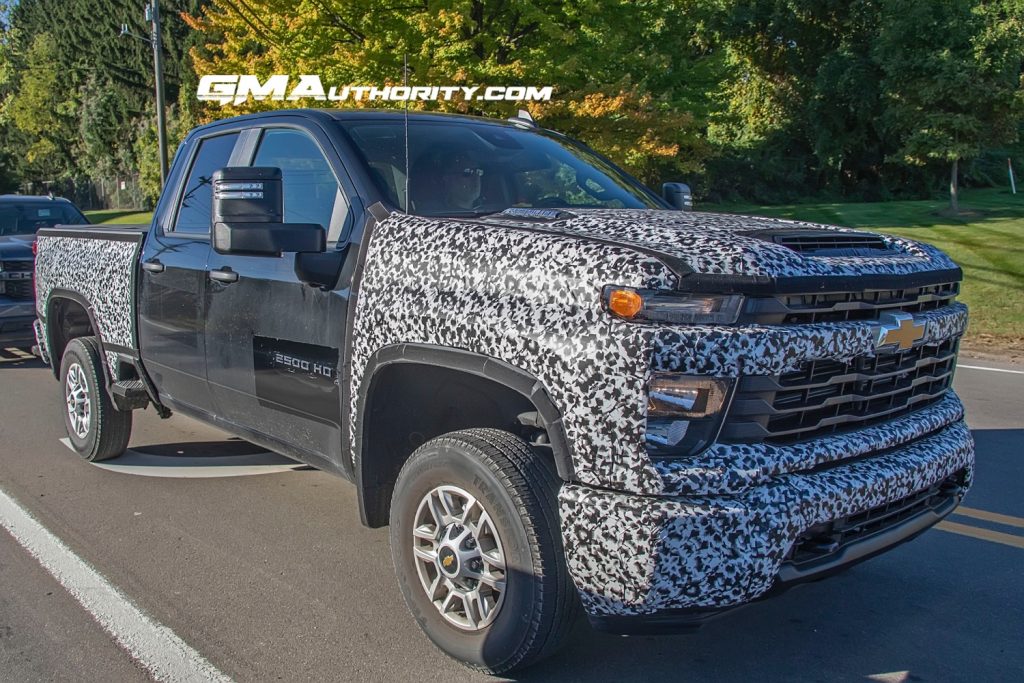 There are multiple clues hinting that this 2024 Chevy Silverado 2500 HD is a Work Truck, starting with the front fascia. The CHEVROLET script grille is missing, with a simple Chevy bowtie in its stead. On the pre-refreshed Silverado HD range, only the High Country received the Bow Tie. This may suggest that the CHEVROLET script will be scrapped for the refreshed trucks.

Additionally, the forward lighting set-up is similar or even identical to the pre-refresh trucks, with halogen headlights indicative of a Work Truck model. The grille, however, is all-new, with different detailing and a unique slat design, similar in appearance to the one that debuted on the 2024 Silverado HD High Country. That said, the grille on this prototype features three lower horizontal slats instead of two and a half on the High Country, hinting that it’s a unique design for this lower trim level. 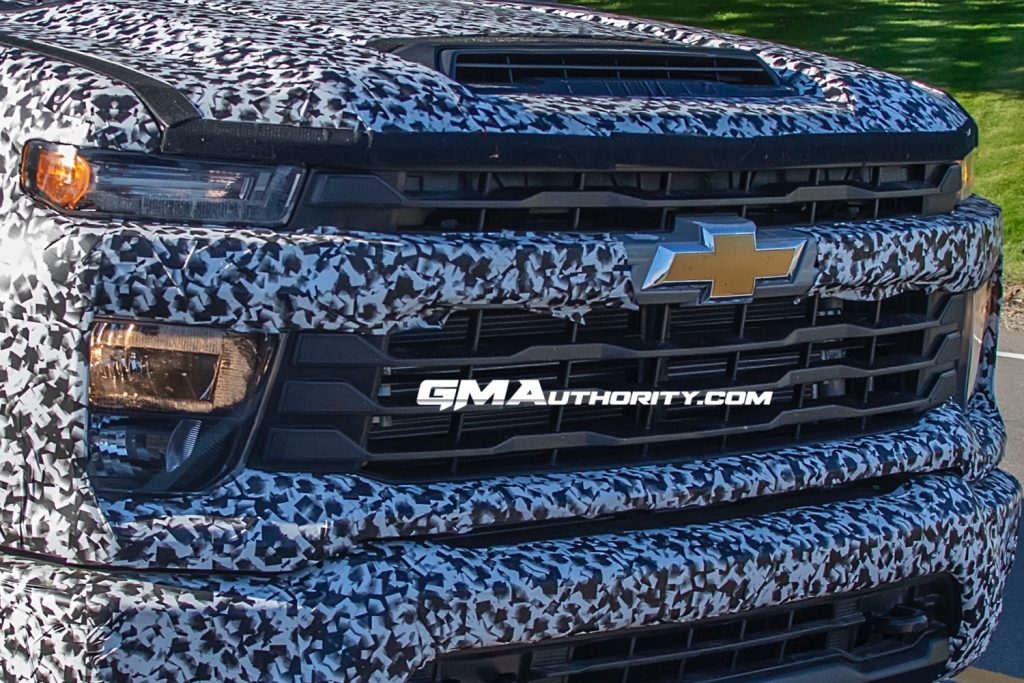 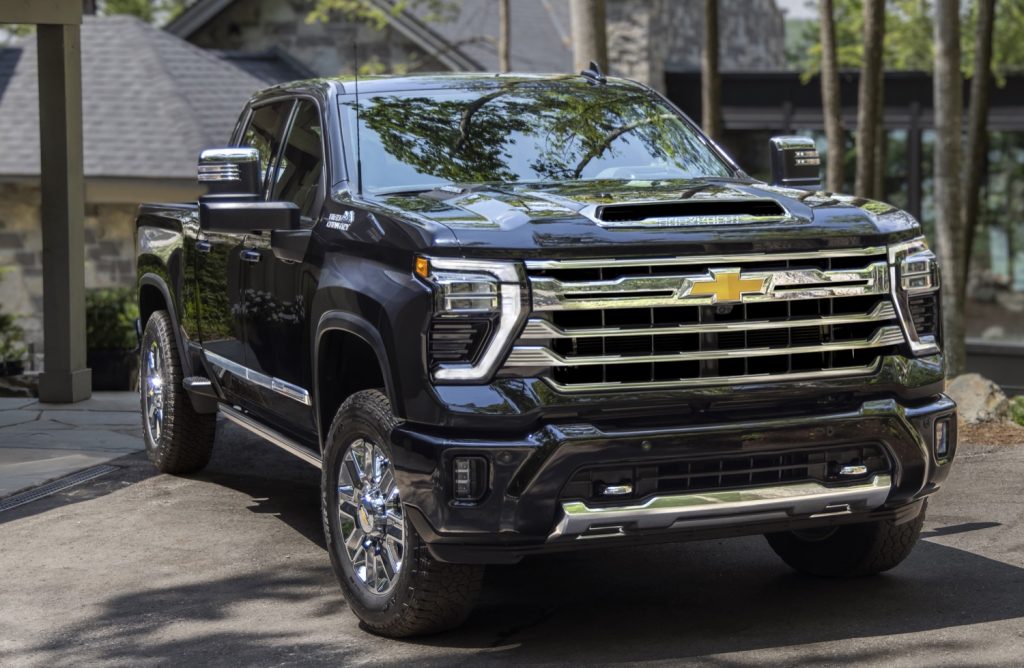 While the camouflage obscures many details, this truck seems to be missing some of the chrome accents found on the pre-refresh Silverado HD LT, including the main grille cross bar and hood air duct, lending more credence to the notion that this is – in fact – a WT-trimmed vehicle. 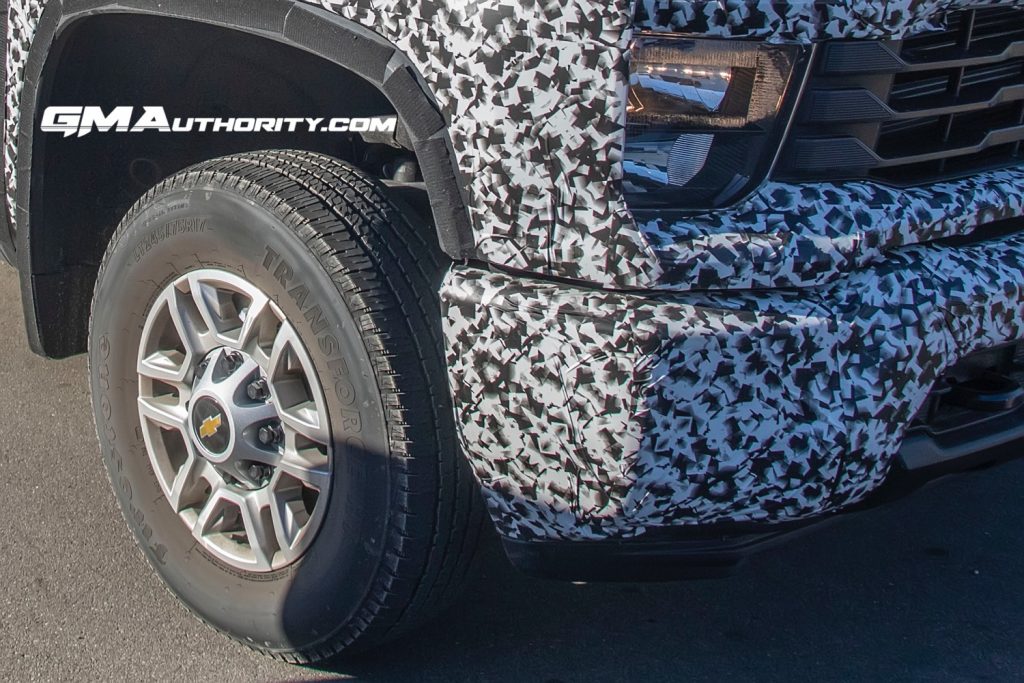 It’s also worth noting that this 2024 Silverado HD rides on 17-inch Machined Aluminum wheels (RPO Code PYQ), an option available on the WT and standard on the LT in the pre-refresh models. 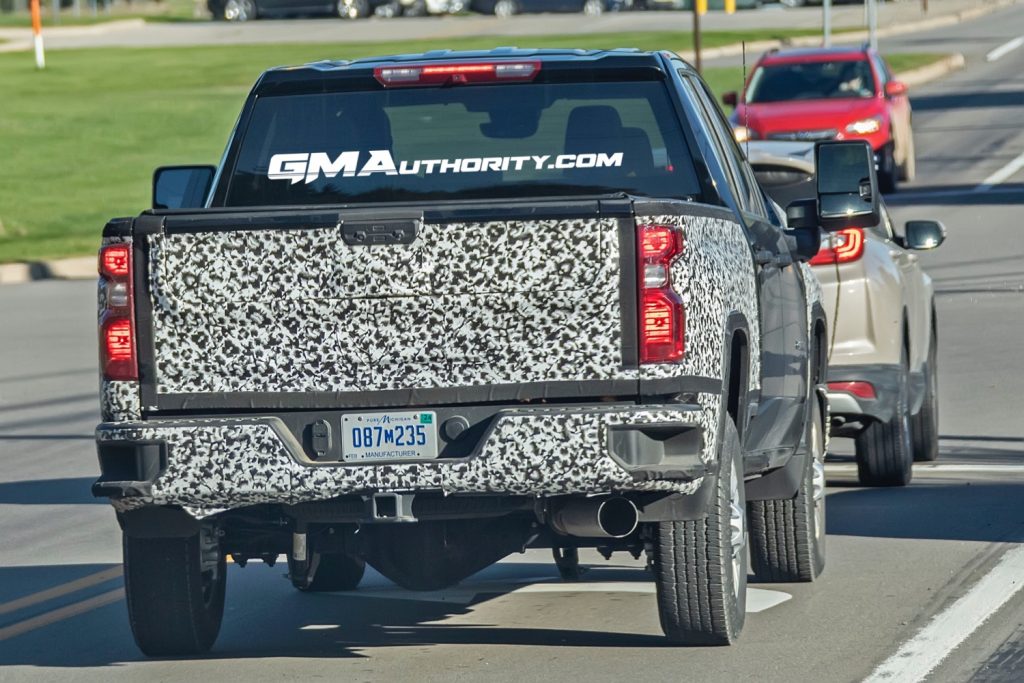 Out back, we can clearly see the Multi-Flex tailgate, along with the large exhaust indicative of the big boy diesel V8. This model is equipped with incandescent taillights, which are typically found on WT, Custom and LT trims, while LTZ and High Country models are equipped with signature taillamps. 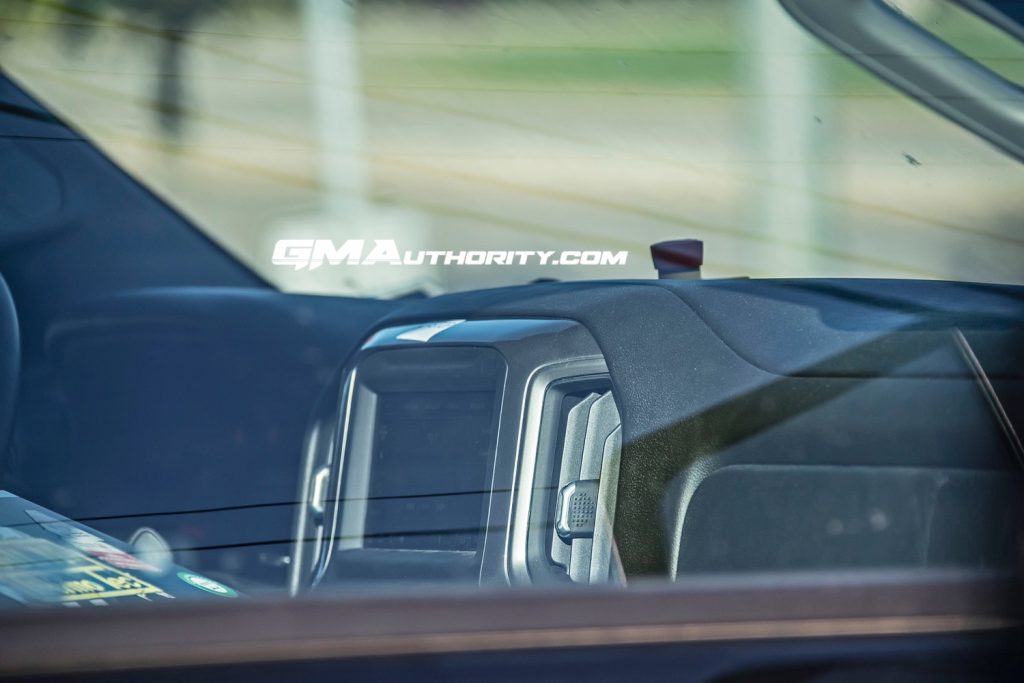 Inside, this prototype is rocking the same interior as the pre-refresh model. While the 2024 Silverado HD lineup will benefit from upgrades found on the refreshed 2022 Silverado 1500, including a larger infotainment screen, Chevy has already confirmed that the WT and Custom trims of the 2024 Silverado HD will continue using the older interior. 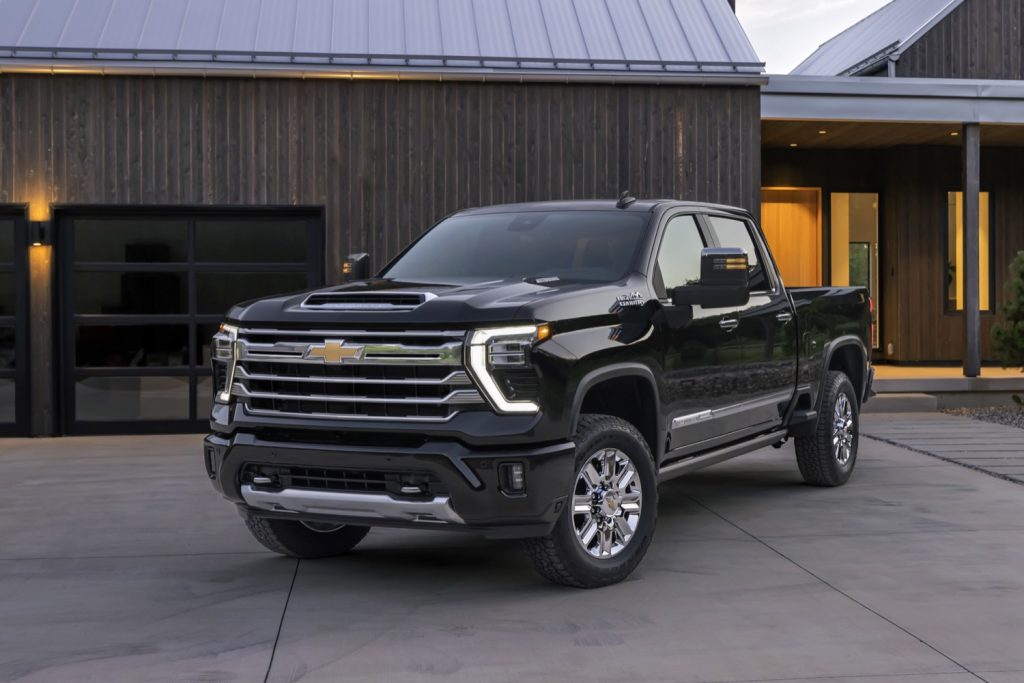 As a reminder, the 2024 Chevy Silverado HD features the 6.6L V8 L8T gasoline engine as standard, while the 6.6L V8 L5P turbodiesel Duramax engine is optional. The diesel engine now boasts an improved output of 470 horsepower and 975 pound-feet of torque. Both the diesel engine and the gasoline engine connect to the Allison-branded 10-speed automatic transmission as standard, which replaces the GM six-speed used in pre-refresh gasoline-powered models. 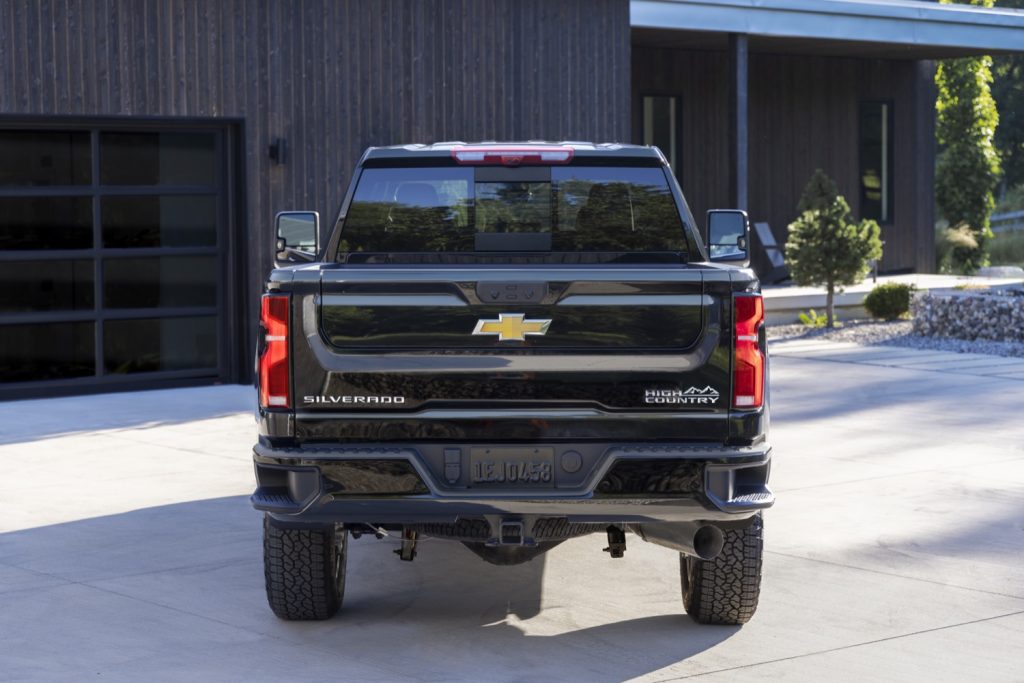 The 2024 Chevy Silverado HD made its public debut at the State Fair of Texas on September 29th. Production kicks off in the first half of the 2023 calendar year at the GM Flint Assembly plant in Michigan and GM Oshawa plant in Canada. Exact pricing details are expected closer to the start of production.