These days, modifying a truck for performance is a relatively popular thing to do. That said, this 1971 GMC pickup takes things to the extreme, swapping in a twin-turbo V8 behind the cabin to make insane four-figure power. 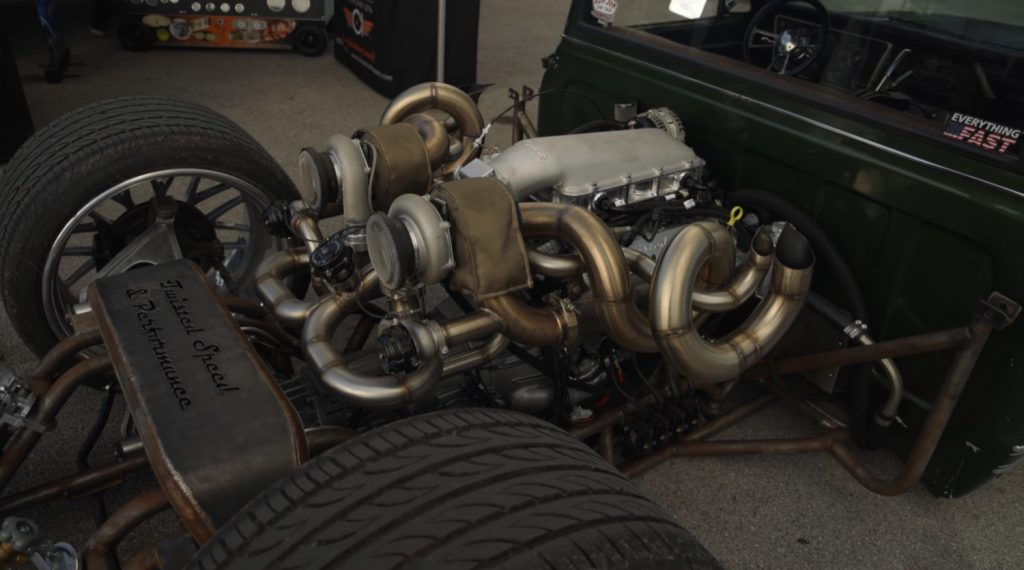 As featured in this brief video from Holley, this particular pickup is a 1971 GMC C10 long bed, which was built by Twisted Speed And Performance out of Louisville, Kentucky. Spotted at the recent LS Fest East 2022 event in Bowling Green, the story behind this truck starts innocently enough, with the folks at Twisted Speed And Performance purchasing the 1971 GMC pickup from a buddy who had owned it for about 10 years. The truck already had air ride suspension installed, so it looked like a nice platform for a build.

Unfortunately, by the time the crew got the 1971 GMC pickup back to the shop, they realized that the frame was bent. As such, the next step was to do something pretty wild.

“We had a motor sitting in the shop, we were like, ‘you know what, we’ll just do something crazy, we’ll throw the motor in the back and go at it,’” says  Twisted Speed And Performance head fabricator Stevie Gibson. “That’s kind of what we did.”

Now, this 1971 GMC pickup is looking to be a total show-stopper, with just about every part on it set for customization. The truck is riding on a full tube chassis with coilover suspension, but the main party piece is the twin-turbocharged 6.0L V8 engine sitting behind the cabin. Mating an iron block with a BTR valvetrain, BTR internals, and a long list of Holley parts that includes a new intake, intercooler, and Terminator X Max computer, peak output is a claimed 1,062 horsepower on the dyno, all of which is directed through a Chevy Corvette rearend and lightly upgraded 4L60E automatic transmission.

Looking ahead, Twisted Speed And Performance will hook up those massive nitrous bottles for even more power. The shop also plans to reinstall the bedsides and make it look pretty, with the eventual goal being the Young Guns award in the Battle of the Builders at the annual SEMA Show in Las Vegas.