Ford Motor Company introduced the Ford Mustang as a mid-year model in April of 1964. The Mustang was an instant success for which General Motors had no production rival, at least not in the showrooms. The Chevy Camaro would bow shortly after for the1967 model year. Five months after Camaros were on Chevy dealer’s showrooms, the Performance Division got a pony car of its own, the Pontiac Firebird. In March of 1969, the Pontiac Trans Am Performance and Appearance package was born, named after the racing series in which five-liter Firebirds, Camaros, and Mustangs were competing. Only 689 Trans Am hardtops and a scant eight convertibles would be built for the ’69 model year. 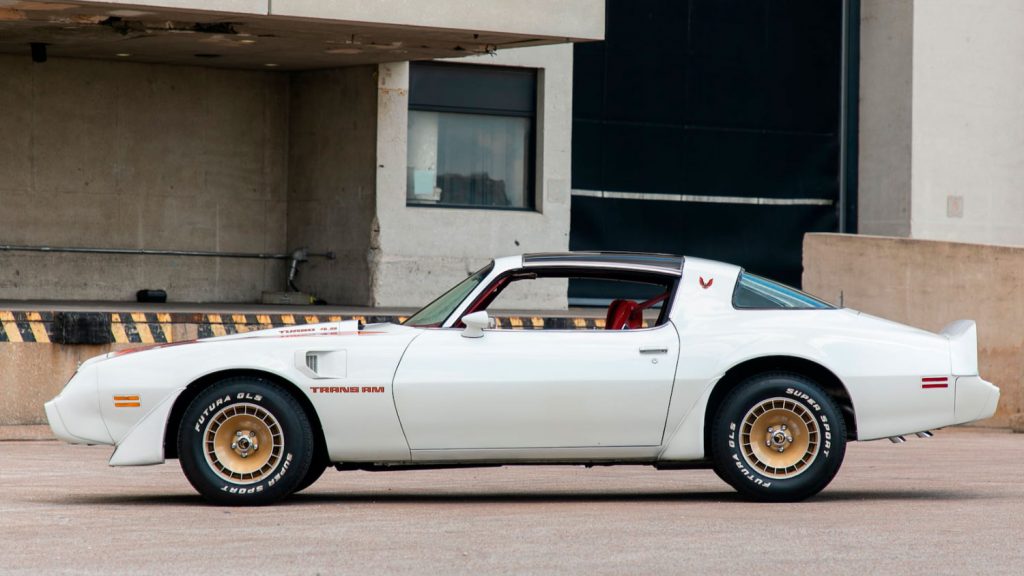 Though available with desirable performance options, the Pontiac Trans Am lived in the shadow of its Chevy Camaro corporate cousin. The Trans Am had a loyal following, due largely to its refusal to succumb to the performance-robbing Malaise Era regulations. The 1973-1974 Trans Am 455 Super Duty has been called Pontiac’s last muscle car, a final defiant stand against the man, cranking out 310 net horsepower that put the best-performing 245-horsepower Camaro to shame. Power came from a reinforced 455 cubic-inch block and forged internals, but with a restrictive exhaust and mild camshaft, it was built to be a starting point for the performance savvy. Still, the Camaro handily outsold the T/A until the 1977 action comedy film Smokey and the Bandit came to the box office. The movie starred a 6.6-liter Trans Am in Starlight Black with gold decals that captured the imagination of the country’s gearhead faithful. Seemingly overnight, everyone had to have a T/A. In 1977, Pontiac sold 68,745 Trans Ams. In 1978, that number jumped to 93,351, and in 1979 117,078 Trans Ams went out the door, outselling the Camaro for the first time. 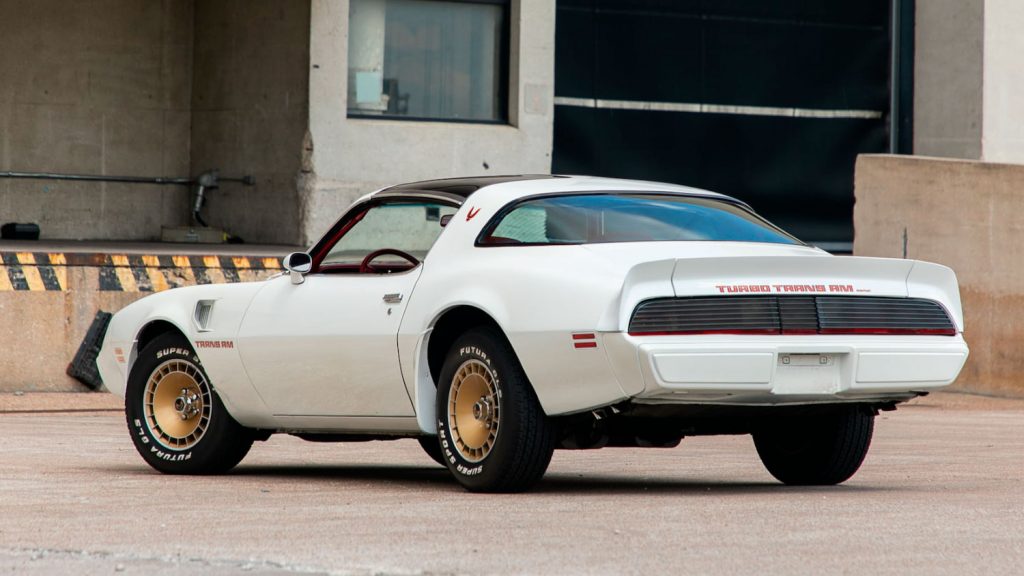 Government regulation in the form of the Corporate Average Fuel Economy (CAFE) standards killed off the famous 6.6-liter Pontiac Trans Am, with production ending in 1979. Pontiac needed a new powerplant for the T/A. The last thing they wanted to do was go begging to Chevy for the Small Block 350 that powered the Camaro. Pontiac engineers decided to try adding a turbocharger to the 301 (which really displaced 302 cubic inches, but was called a 301 to avoid being confused with Ford’s 302 cube V8). They took a standard 301 and built it with more robust pistons, head gaskets, a high-pressure oil pump. Electronically controlled Garrett TBO-305 turbochargers were sourced from Buick, feeding nine PSI to a modified Rochester Quadrajet four-barrel carburetor. To keep everything in line was an ignition-retarding knock sensor. 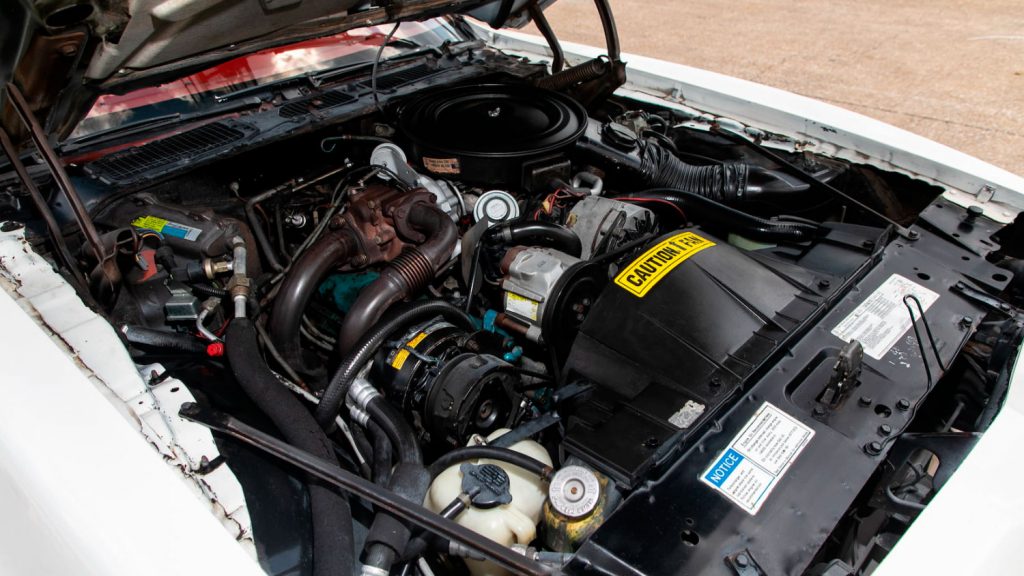 The 1980 Pontiac Trans Am Turbo put out 210 horsepower and 345 pound-feet of torque (a stock 301 put out just 140 horsepower and 240 pound-feet of torque). On paper, this didn’t look like much less than the 220-horsepower rating Pontiac had given the previous year’s 6.6. The problem was the 6.6 had been grossly underrated, and 260 horsepower was closer to the truth. The T/A Turbo’s performance was also hampered by the sole transmission choice of a three-speed automatic and a 3.08 rear differential as the only gear available. In testing the 1980 Pontiac Trans Am Turbo, Motor Trend magazine managed a rather dismal 9.05-second zero-to-sixty time, with the quarter mile arriving in 17.02 seconds. 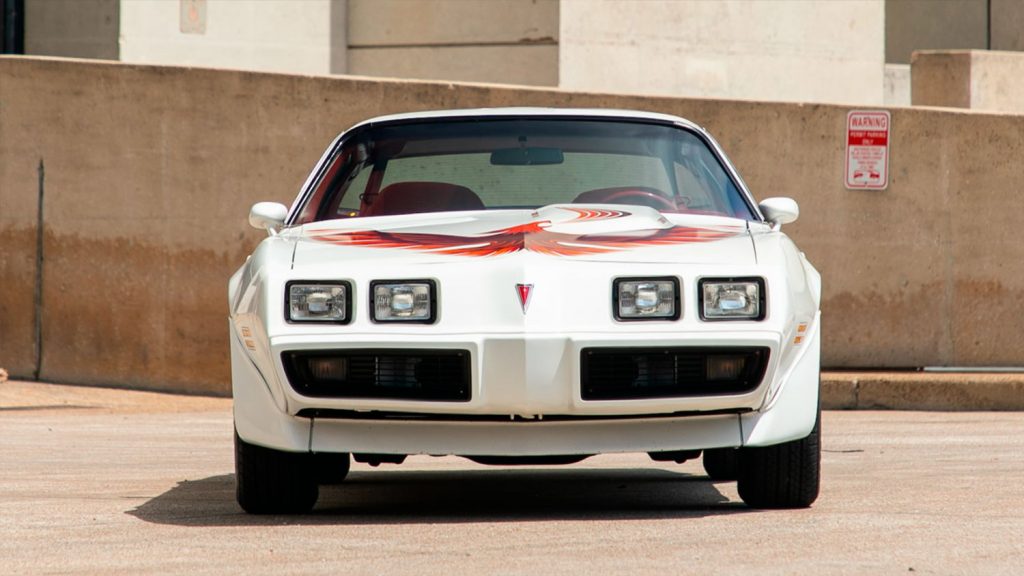 With the new turbo powerplant, the 1980 Pontiac Trans Am also received a new hood bulge. The shaker hood was gone, replaced by an offset driver’s side power bulge to accommodate the turbo/carb setup. The backside of the power bulge housed a turbo boost gauge that had a trio of horizontally arranged lights that would indicate boost level, labeled NORMAL, MEDIUM and HIGH. 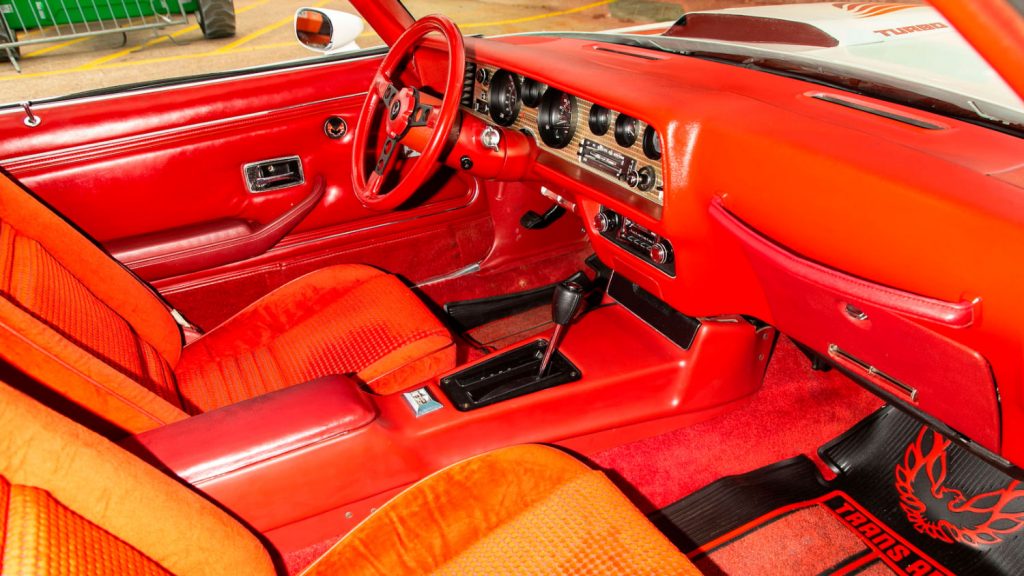 Our feature 1980 Pontiac Trans Am Turbo has covered just 38,475 miles from new. Finished in Cameo White with burgundy, red, and orange decals, the Trans Am presents as showroom new. The interior is a brilliant red cloth with the T/A’s trademark machine-turned dash. No appreciable wear is noted on seats or carpets. The T/A is equipped with radial tuned suspension, power steering, power brakes, power windows, tilt wheel, cruise control, tinted glass, and glass T-tops. The engine bay is well detailed. 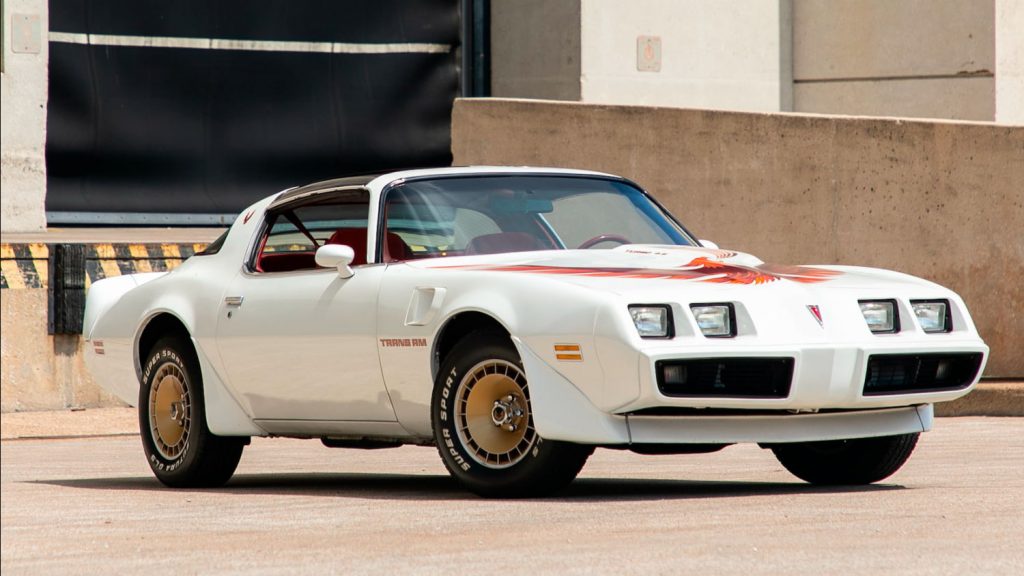 This 1980 Pontiac Trans Am Turbo will cross the Mecum Auctions block at their Las Vegas, Nevada event taking place November 10th through the 12th. 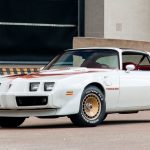 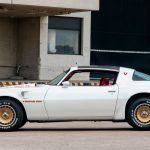 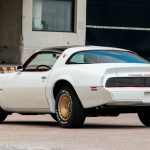 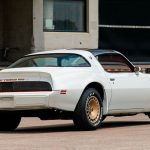 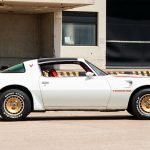 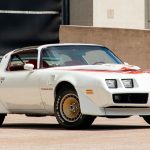 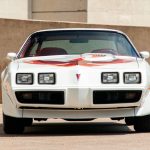 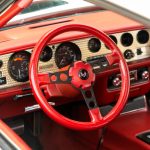 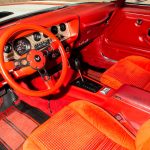 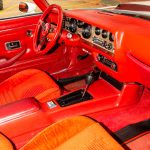 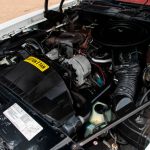 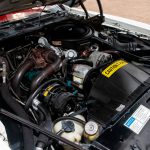