Introduced as a 1952 concept car, the Cadillac Eldorado marked the brand’s 50th anniversary. The Eldorado moniker was the result of a contest within the company to name the new model, and is a contraction of the Spanish name for the mythical Colombian city of gold, El Dorado. 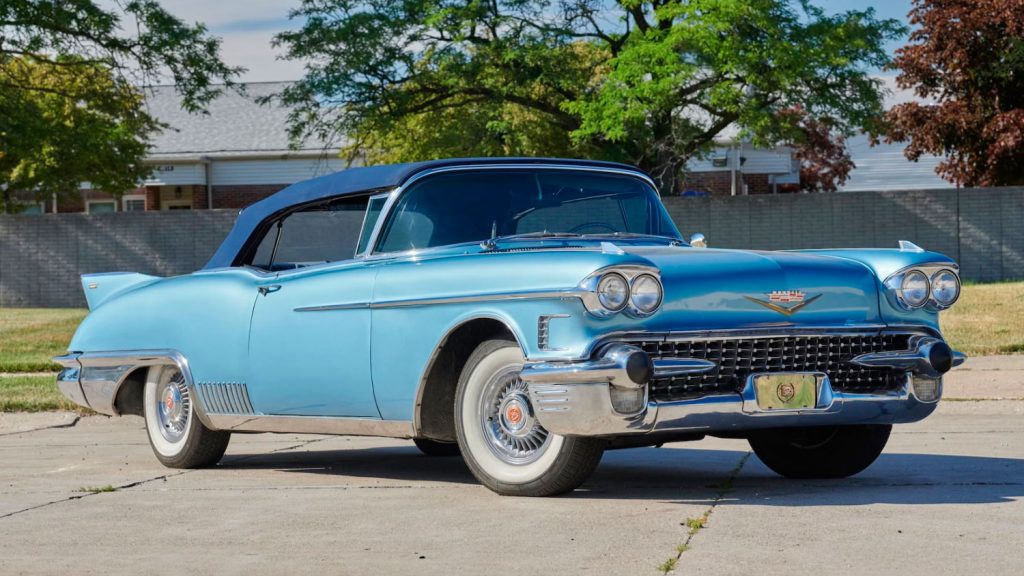 The 1953 Cadillac Eldorado was a limited-production, flagship convertible with unique bodywork, a lowered beltline, wraparound windshield, bumper bullets, and a full complement of exclusive accessories including available air conditioning, signal-seeking AM radio, and power windows. The new Eldorado could be had in Azure Blue, Alpine White, Aztec Red, or Artisan Ochre. The sticker price was nearly twice that of the standard Series 62 convertible. 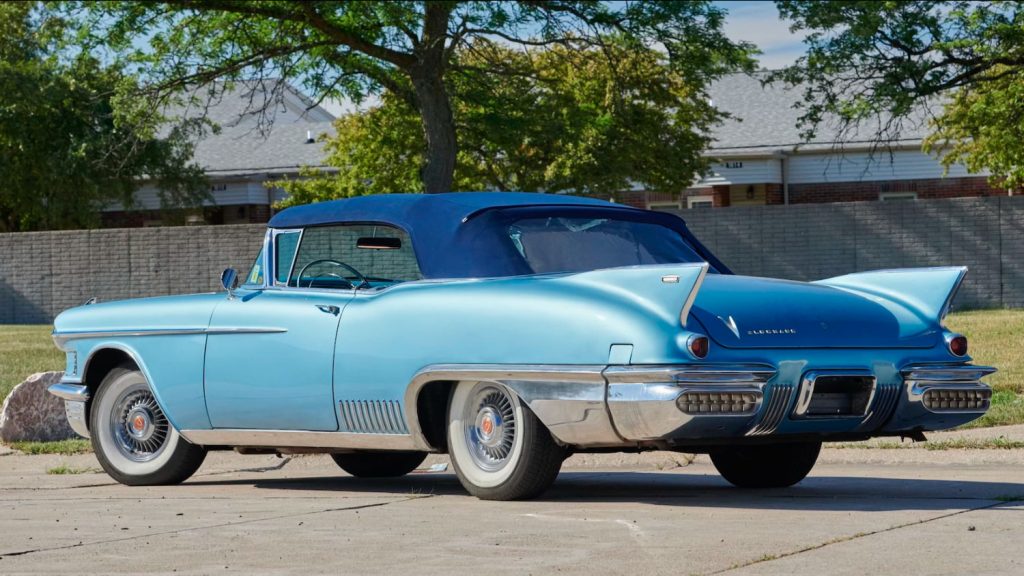 For the 1954 model year, the unique Cadillac Eldorado bodywork was jettisoned in favor of using the standard sheetmetal of other Cadillac models. Although this took away some of the exclusivity of Eldorado ownership, it allowed Cadillac to drop the price, yielding far more orders. The 1954 Eldorado was distinguished by model-specific trim. Well-equipped from the factory, the Eldorado could be loaded with power steering, power brakes, power windows, electric front seat, power convertible top, E-Z Eye Glass Headlight Dimmer, a Hydramatic automatic transmission, chrome wire wheels, and wide whitewall tires. 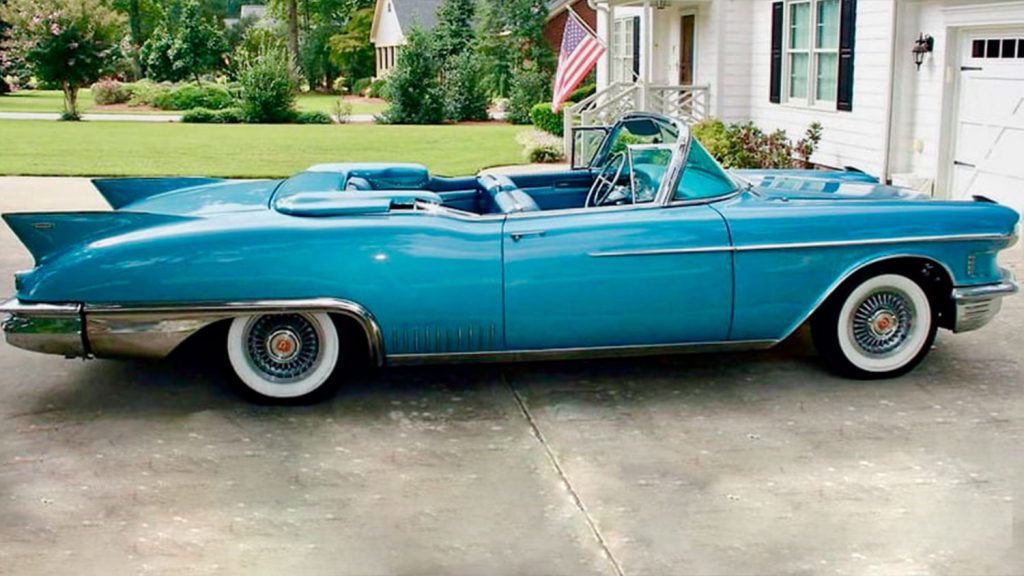 After a full redesign for the 1957 model year, the 1958 Cadillac Eldorado adopted the quad-headlight design of its GM full-size brethren. The new hood prominently featured the requisite Cadillac golden V and crest. The three-piece front bumper sported rubber-capped “Dagmar” bullets with driving lights beneath. The Eldorado Biarritz continued the unique swept rear bodywork of the previous year, but added vertical bright trim just forward of the rear wheel opening. Chrome trim extended from the rear wheel well to the rear bumper. The Eldorado Biarritz rolls on wide whitewall tires wrapped around Sabre spoked wheels. This would be the final model-year Eldorado with Harley Earl’s indomitable influence. 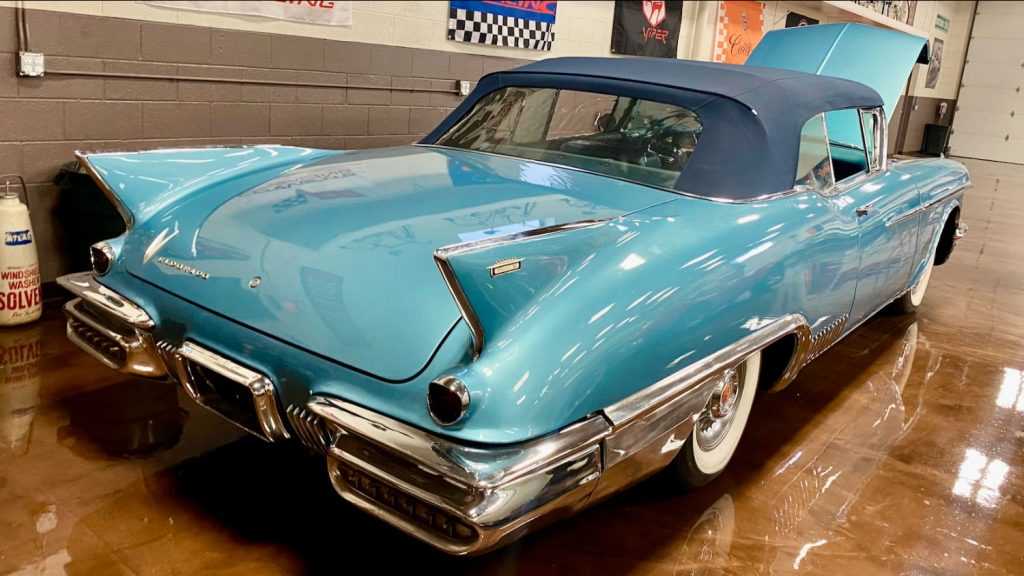 Our feature 1958 Cadillac Eldorado Biarritz is one of only 815 built in 1958. It is finished in Lake Placid Blue with a blue leather interior and a darker blue Haartz-cloth style soft top. A body-color-painted parade boot to cover the soft top when it’s down is included in the sale. It is said this Eldorado Biarritz was the subject of a comprehensive restoration some time ago, and it appears to be holding up well. 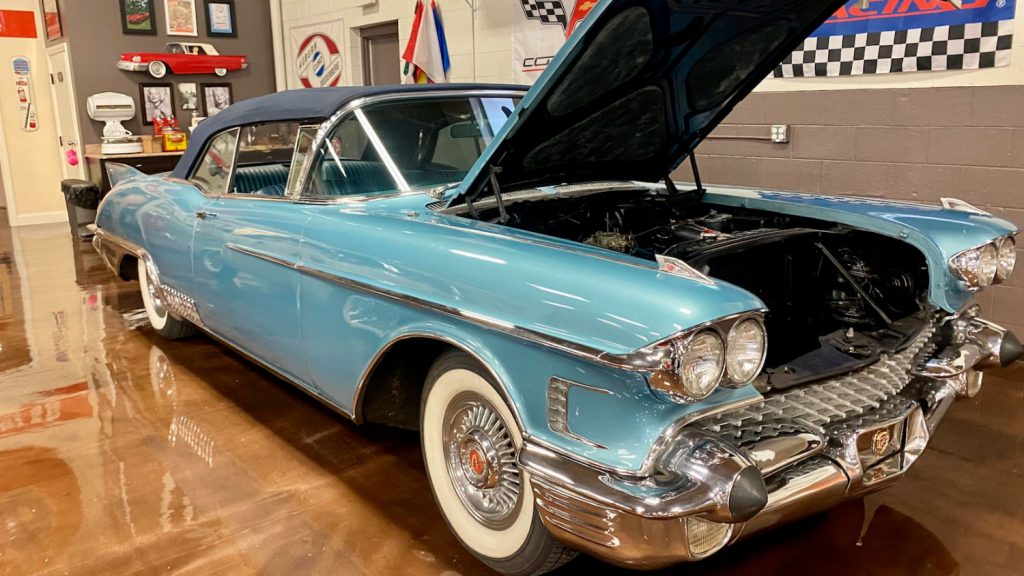 Inside the Cadillac Eldorado Biarritz is awash in complementary Blue Metallic leather. The wide bench seats show very little sign of use, another indication of careful use since the restoration was completed. In front of the driver is a large two-spoke steering wheel with chrome inner horn ring. The steering wheel framed a broad horizontal speedometer. Flanking the speedo to the left are gauges for temperature and fuel level, and to the right resides a large oval clock. In front of the passenger is the signal-seeking am radio to the left, with a dash-wide decorative panel stretching to the door panel. The back seat looks both big and comfortable. Plush blue carpet covers the floors. 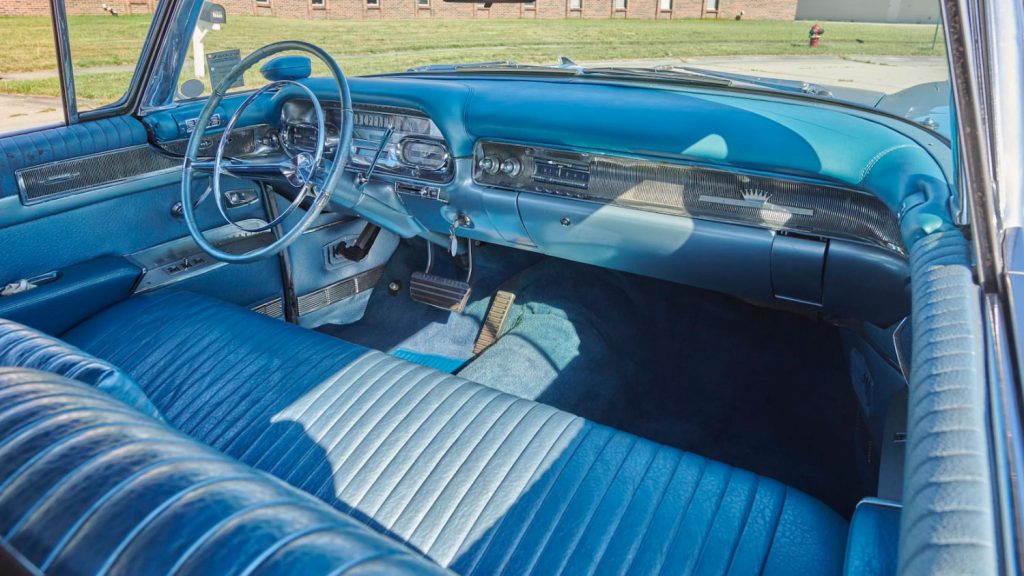 Under the hood of the Cadillac Eldorado Biarritz is the 365 cubic-inch V8 fed by triple two-barrel Rochester carbs. The 365 produces 335 horsepower, and is backed by the aforementioned Hydramatic automatic transmission.

This rare 1958 Cadillac Eldorado Biarritz will cross the Mecum Actions block at their Chicago event happening October 13th through the 15. 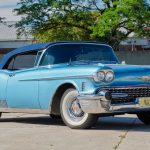 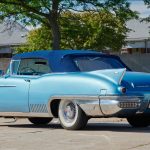 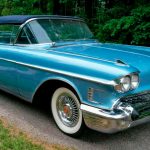 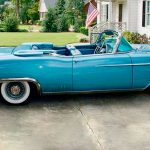 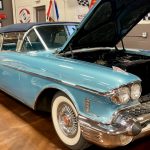 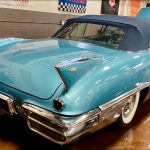 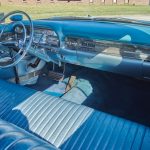 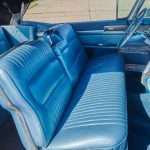 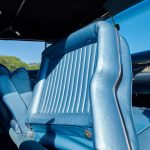 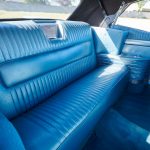 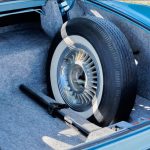