Tensions between the No. 24 Nascar Chevy Camaro ZL1, driven by William Byron, and Denny Hamlin’s No. 11 Toyota TRD Camry were certainly high at Texas Motor Speedway on September 25th, 2022. As a result, the No. 24 Chevy team was docked 25 championship points and Byron himself was fined $50,000 for his on-track aggression against the No. 11 Camry of Hamlin.

Byron claimed that Hamlin had chased him up the racetrack, forcing the No. 24 Camaro into the wall and damaging it. Byron retaliated under a caution flag that flew about 10 second later, ramming his No. 24 Camaro into the back of the No. 11 Camry and sending Hamlin spinning across the infield. The two drivers were running near the front at the time of initial contact, but the spin caused Hamlin to lose track position.

Initially, competition officials stated that they had missed the call to penalize Byron for retaliation as they were focused on attending to the crash that brought the caution out, which Byron and Hamlin were not involved in. However, they walked back on that call and announced the penalties on Tuesday, September 27th. Byron was cited for violating Sections 4.3.A and 4.4.C of the Nascar Member Code of Conduct, which refer to vehicle contact during a caution period.

Byron was scored in seventh place when the checkered flag waved over Texas Motor Speedway, putting him 17 points ahead of the Playoffs cutoff line. However, the 25-point penalty has dropped the No. 24 Nascar Chevy team eight points below the cut line, putting Byron in danger of being eliminated from championship contention. Hendrick Motorsports, the team that fields the No. 24 Chevy for Byron, announced that it would appeal the penalty, but a verdict has yet to be reached. 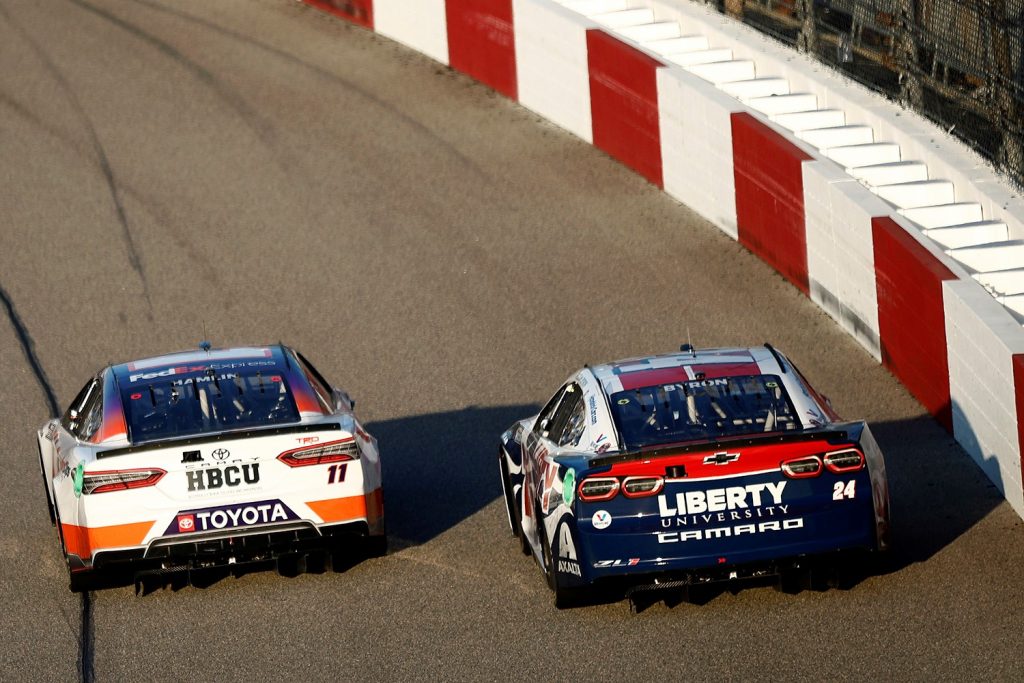 On a side note, the No. 23 Camry, driven by Ty Gibbs, was also penalized for a retaliatory act at Texas. Gibbs was fined $75,000 for intentionally spinning the No. 42 Camaro of Ty Dillon out on Pit Road and endangering pit crew members and Nascar officials.