The J.D. Power China IQS aims to identify the automotive brands and models that offer the highest degree of perceived initial quality. The results of this year’s China IQS are based on the survey responses of 3,914 new vehicle owners who purchased their vehicles between June 2021 and March 2022. Participants were asked to rank their vehicle on 218 problem symptoms across nine specific categories, including exterior, interior, infotainment system, seats, driving experience, driving assistance, powertrain, climate and features, controls and displays. Each brand is then given a score based on the problems experienced per 100 vehicles sold (PP100). 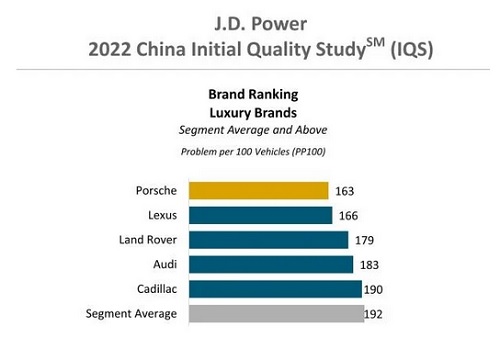 Cadillac was fifth overall among luxury brands in the 2022 China IQS with a PP100 score of 192. This was just barely above the mass-market brand average score of 190, and lower than Porsche, Lexus, Land Rover and Audi, in that order.

Cadillac also missed out on segment-level award in this study, although the Cadillac CT6, which remains in production in the Asian country, was ranked second in the Midsize Luxury Car segment behind the Lexus ES. GM’s Chinese arm is currently developing a next-generation Cadillac CT6 for the Chinese market only, which is expected to go on sale for the 2024 model year.

An unpleasant interior smell was the most commonly cited problem overall in this study, while excessively sensitive brakes and excessively uncomfortable seats were also commonly cited issues. The exterior as the most problematic vehicle category, however, with many survey participants also reporting issues with excessive road noise and headlights that are not bright enough.