The Chevy Malibu received an overall rating of ‘Poor’ in a recent side-impact crash test conducted by the Insurance Institute for Highway Safety, losing out to key rivals like the Honda Accord, Toyota Camry and Nissan Altima.

The IIHS evaluated seven different midsize vehicles using its updated side crash test, including the 2022 Subaru Outback crossover and a variety of midsize sedans including the 2022 model-year VW Jetta, Hyundai Sonata, Honda Accord, Toyota Camry, Nissan Altima and Chevy Malibu. Only the Outback achieved the best-possible rating of ‘Good’, with the vehicle’s higher intrusion levels helping to protect passengers in T-bone-style side-impact crashes.

The Sonata and Jetta received an overall rating of ‘Average’, while the Accord received a rating of ‘Marginal’ and the Camry, Altima and Malibu were all deemed ‘Poor’. Of the three lowest-rated vehicles, the Malibu performed the worst, receiving the worst-possible rating for structure and safety cage integrity and its ability to prevent head and neck injury. The Altima had a similarly poor performance, but managed to protect rear-seat passengers more effectively and was thus rated one position above the Malibu.

The IIHS had this to say about the Camry, Altima and Malibu’s side-impact crash test performance: 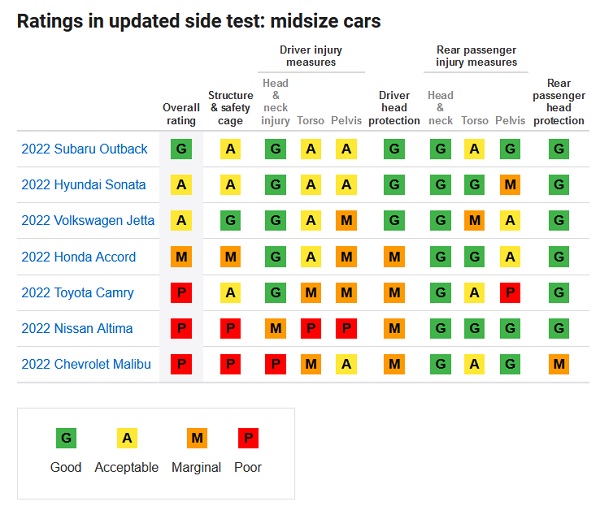 The IIHS updated its side-impact crash test last year to better reflect the higher-riding and heavier crossovers and SUVs of the current day. The new test includes a heavier 4,180-pound barrier to mimic the weight of a modern-day mid-size crossover, which travels at a higher speed of 37 mph compared to the previous test speed of 31 mph. The IIHS says these changes result in a crash that generates 82 percent more energy. The honeycomb-pattern striking surface of the new barrier also has a different design that acts more like today’s SUVs or pickups when striking the side of another vehicle.