The exterior design of the battery-electric Honda Prologue, which will tap GM’s Ultium battery technology and Ultium Drive motors, has been teased ahead of the mid-size crossover’s official launch in 2024.

The Honda Prologue crossover, described by the company as its first volume EV, has been co-developed by Honda and GM as part of the two companies’ ongoing technology sharing partnership and is expected to be produced at the GM Ramos Arizpe plant in Mexico. GM said in April of this year that it would invest more than $1 billion USD in its Ramos Arizpe plant to re-tool the facility to produce EVs.

Honda project lead Jiro Akeda describes the exterior design of the Honda Prologue as “neo-rugged,” combining current-day EV design trends with cues intended to give the crossover a capable-looking appearance. Sang-Hyuk Ahn, a four-year exterior designer at Honda, said the unique characteristics of GM’s Ultium tech provided it with greater flexibility when designing the eco-friendly crossover.

“Designing the first volume Honda electric vehicle gave us more freedom than a vehicle with an internal combustion engine, and we can stretch our imagination, especially in styling the front-end,” Sang-Hyuk Ahn said. “We envisioned Prologue with a longer wheelbase, shorter overhang, and capable tires to create sporty proportions and a stronger stance.”

Additionally, the Prologue is the first Honda vehicle designed primarily through virtual reality visualization technology. This tech was used by the design team to envision the Prologue in different environments and to help facilitate cross-collaboration between the Honda styling teams in the U.S. and Japan. 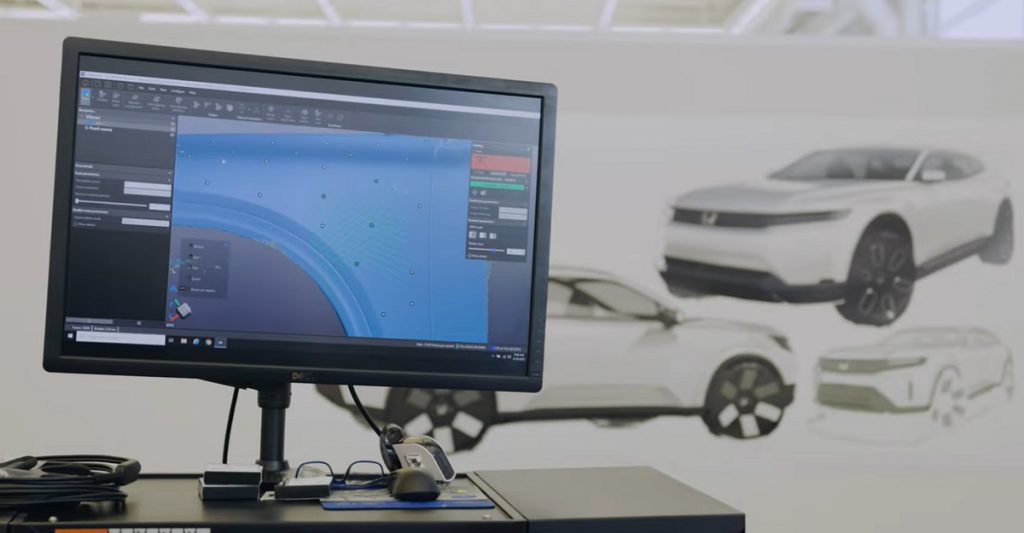 In a press release, Honda said the adventure-ready SUV “delivers engaging everyday driving and fun weekend getaways with a strong hint of the well-received Honda e in the front fascia.”Further details, including on powertrain availability, performance, estimated range, pricing and how widely available it will be in various U.S. states, has not yet been divulged. The automaker plans to release more information on the vehicle in the coming months, with sales set to begin in 2024.