Holley LS Fest West is a GM-themed car meet that’s open to 1997 or later LS or LT V8 powered vehicles, although vehicles with LS swaps are also welcome at the show. Naturally, the event attracts all sorts of ridiculous LS-powered custom builds, and this 1974 Volkswagen Beetle dubbed ‘Project Grey Matter’ is a perfect example of the frankly absurd creations that show up to this custom car meet each year.

While this may look like a beaten-up old Bug, it’s actually just a Super Beetle body plopped on top of a 1997 GMC Jimmy frame. The owner and builder of this fire-breathing V Dub, Duncan Smith, says he shortened the Jimmy frame by about 14 inches to make it fit the stubby Beetle body. Under the hood sits a 6.0L LQ4 Small Block with an aftermarket camshaft, heads and manifolds, a rear-mounted radiator pulled from a Fox Mustang. Power is sent to the rear wheels through a GM TH350 transmission, while a Holley Terminator X handles the engine management. 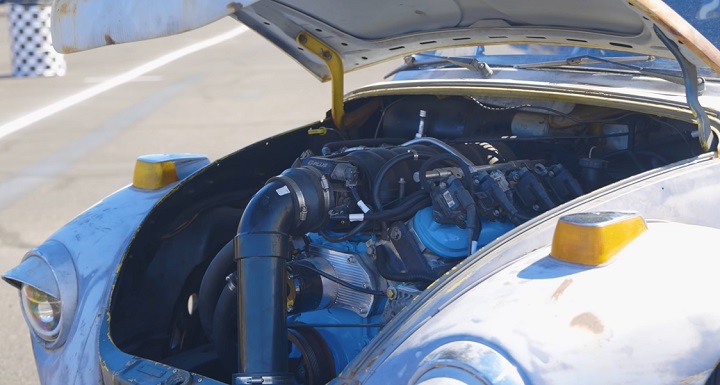 Duncan eventually wants to turn his Volkswagen Beetle into a drag car and compete with it at Holley LS Fest, but with this build in its early stages, he decided to enter it in the burnout competition this year.

“I built the car because I always wanted to,” said Smith, telling the story of how this car has been in his family for years and had been sitting in a field behind their house since about 1999. “I want to make it about a nine-second street car, but currently it doesn’t have a cage. I’m going to revamp some chassis stuff to fit a cage, so I decided to enter it in the burnout competition because I wanted to party.”

While Smith’s bug probably isn’t going to be winning any Concours shows with its primered exterior and beat-up body panels, but that’s exactly why he loves it.

“It’s got character, it’s got dents and dings,” he said. “If something fell on it, I never felt bad, and in the burnouts, if a fender fell off, I can put another primered fender on there and keep sending it.”

Check out the video embedded below to see this mad LS V8-swapped Volkswagen Beetle in action.