Drivers of crossovers and SUVs often cite the vehicle’s higher seating position as reasoning for their purchase, but while sitting higher up comes with its advantages, it can also make pedestrians, cyclists and smaller cars harder to see in certain scenarios. Just take this video from the /r/IdiotsInCars subreddit, for example, which shows the driver of a Ford Explorer running over a C4 Corvette after they failed to see it, essentially treating the sports car like a speed bump. 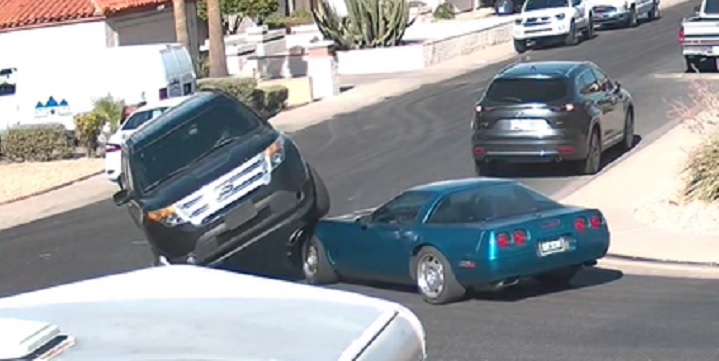 There’s no information to go with this rather crazy video, which was uploaded to Reddit last week. The clip shows a Ford Explorer driving down a residential street with cars parked on both sides of the road, approaching a three-way intersection. An Aqua Metallic C4 Corvette then enters the frame from the right-hand side and attempts to turn onto the adjacent road that the Explorer is on. The Explorer then begins to turn left and drives directly into the path of the Corvette, mounting its driver’s side quarter panel and driving over the top of the vehicle before dismounting. We can’t see any stop signs in the frame, but if they aren’t in place already, it seems as though this three-way intersection could use them.

What’s really bewildering with this clip is that the driver of the Ford Explorer can be seen correcting the steering in order to successfully traverse the C4 Corvette, so we’re confused about what they thought they driving over. It does genuinely seem as though they did not see the Corvette behind their A-pillar, though, as the driver looks a bit panicked when they feel the initial jolt. We imagine the C4 Corvette in this case would have some pretty significant bodywork damage after this, and it also appears as though the window broke.