Electric vehicles are renowned for their quick acceleration, making them a force to be reckoned with in the amateur racing scene. Internal combustion engine fans can chalk another win up for the dinosaurs in the EV versus ICE conflict, though, with this video from American Muscle HD on Instagram showing a Chevy Blazer walking all over a Tesla Model 3 Performance in an amateur short track race.

This video appears to come from the Seekonk Speedway Thrill Show, which includes a spectator drags event that allows attendees to race each other in a one-lap sprint around the one-third mile short track. The Chevy S10 Blazer in the video appears to be prepped for this kind of racing, or at least for track days, as it looks to have a roll cage, aftermarket wheels, lowered suspension, homemade side skirts and tires and some other small modifications.

The Tesla, meanwhile, is bone stock and has to rely on its quick acceleration to keep the S10 at bay – especially as the driver of the Chevy Blazer seems much more determined to win this shootout. The Tesla gets the jump, rather expectedly, but the Blazer driver then brakes late for Turn 1 and gets on the gas early coming out of Turn 2, sending it into a power slide before collecting it and braking late for Turn 3, passing the Tesla on the inside and accelerating out of Turn 4 to take the chequered flag by half a car length. 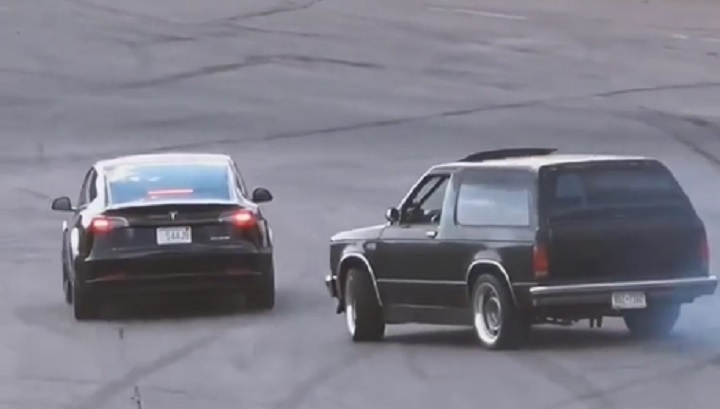 While we love to see a V8-powered Chevy beat a silent electric vehicle, it seems as though the driver of the Chevy Blazer was a bit more experienced and committed than the Tesla driver, which helped him take the win. We get the feeling the Model 3 would have pulled out an early lead and never relinquished it if you swapped the drivers in each vehicle, but there’s no denying this is an impressive performance from the old S10 Blazer.