Speed freaks eager for some mid-engine, track-ready performance can step up to the 2023 Corvette Z06, which offers even more go-fast good stuff than the highly capable C8 Corvette Stingray. Now, we’re checking out this 2023 Corvette Z06 Coupe finished in Caffeine Metallic paint with the following first real world photo.

Captured out on public roads on a bright, sunny day, the ruddy exterior finish looks good, with sunlight revealing the hue’s underlying colors brilliantly. Caffeine Metallic is tagged with paint code G48, and is one of 14 exterior paint options on offer for the 2023 Corvette Z06. The other 13 exterior colors include:

Critically, this particular 2023 Corvette Z06 is also equipped with the Z07 Performance Package, which adds a host of upgrades to the wider and meaner exterior. Up front, these include a new carbon fiber front splitter and front-corner dive planes, enhancing the shark-nose fascia with even more aggression (not to mention downforce). This particular example also appears to have the Carbon Flash crossed flags emblem on the hood 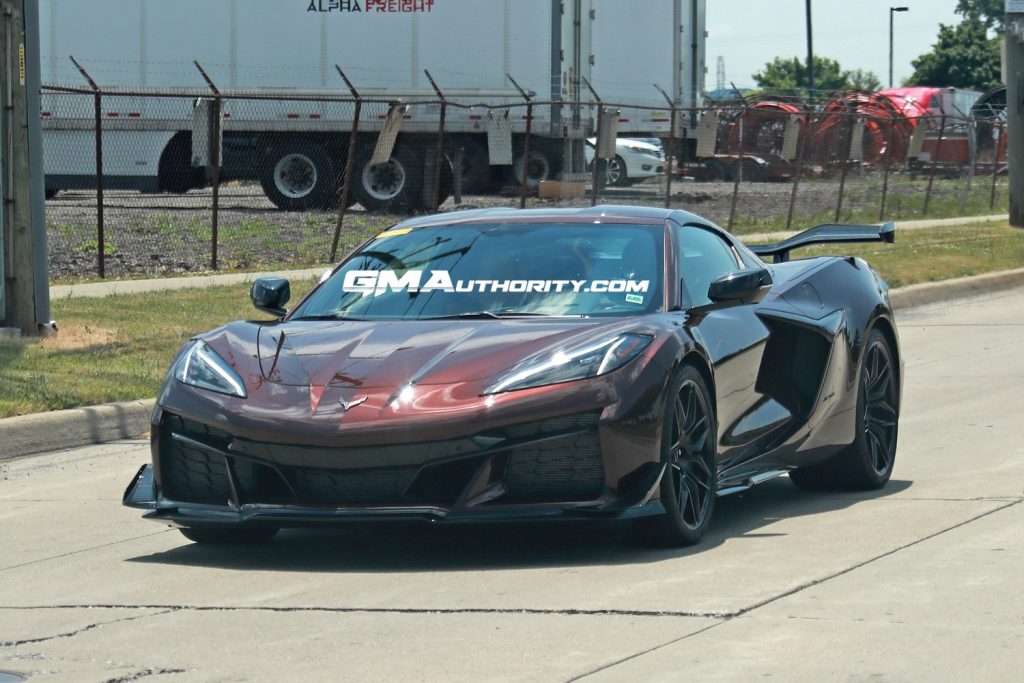 Moving to the corners, this 2023 Corvette Z06 looks to be riding on a set of Satin Graphite wheels, with a sharp, multi-spoke design that looks good alongside the more-aggressive aero treatment. The side view also shows off the standard wishbone side intake trim and substantial rear haunches to boot.

The rear end of this 2023 Corvette Z06 is equipped with a very large carbon fiber wing, which is included as part of the Z07 Performance Package mentioned earlier. Although we can’t see it, the rear end also likely sports the standard center exhaust placement with four rounded pipes dispersing spent gasses.

Motivation is sourced from the naturally aspirated 5.5L V8 LT6 gasoline engine, which is rated at 670 horsepower and 460 pound-feet of torque. Production takes place at the GM Bowling Green plant in Kentucky.