By 1973, the American muscle car golden age had officially come to a screeching halt, giving way to the so-called malaise era of domestic automobile manufacturing. Luckily, the following drag racing video features two cars that hit the scene just before the arrival of the malaise era, and now, we’re watching as this 1972 Pontiac Firebird Trans Am lines up alongside 1970 AMC AMX in a heads-up, straight-line competition.

Let’s start with the 1972 Pontiac Firebird Trans Am. Under that blue hood we find a 455 cubic-inch high-output V8 engine with a bunch of goodies attached, including an aluminum intake manifold, oval-bore heads (exclusive to the 1972 model year), a high-lift cam, and a free-flow exhaust system. Putting it all together, and this Pontiac Firebird Trans Am was rated from the factory at 300 net horsepower at 4,000 rpm and 415 pound-feet net torque at 3,200 rpm, all of which is sent to the rear axle by way of a four-speed manual transmission, making for a relatively rare configuration for the 1972 model year. A set of upgraded 3.73 rear gears were also installed. Vehicle weight with driver is estimated at 3,676 pounds. 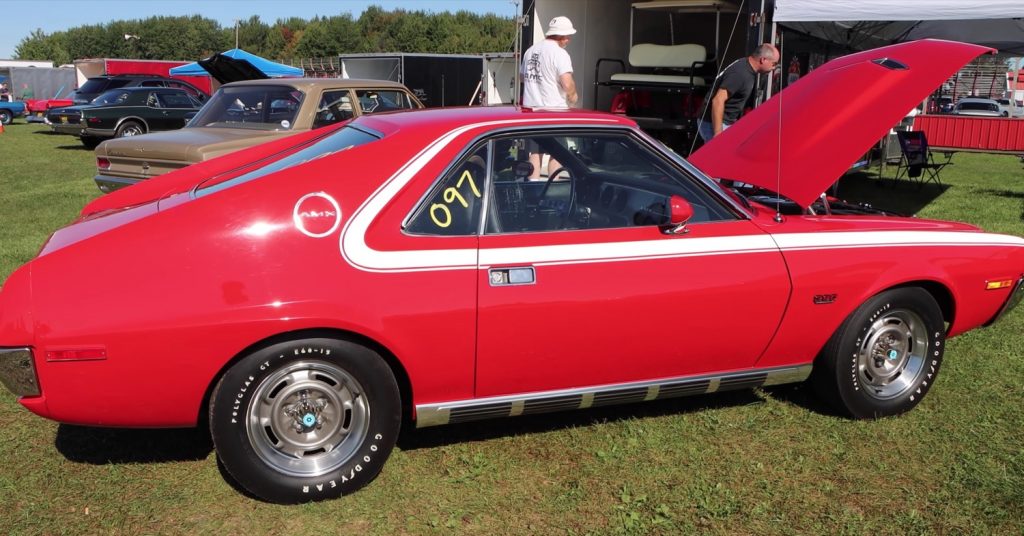 This 1972 Pontiac Firebird Trans Am certainly has some impressive equipment, but the competition might have the right stuff to match it. Over in the other lane is a 1970 AMC AMX, which cradles a 390 cubic-inch V8 engine with a compression ratio of 10.2:1. Output is rated at a maximum of 325 horsepower at 4,800 rpm and 430 pound-feet of torque at 3,200 rpm, and, like the Pontiac Firebird, the two-door AMC AMX is also running a four-speed manual transmission. In back is a set of upgraded 3.91 gears. Vehicle weight with driver is estimated at 3,414 pounds.

Both vehicles compete in the Pure Stock Muscle Car Drag Race series, which does allow for some modifications. Check out how they get on in a drag race with the video below: