Will Power dominated Sunday’s Detroit Grand Prix from Bell Isle, giving Chevrolet its 100th victory in the IndyCar Series since the turbocharged 2.2-liter V6 engines were introduced in 2012.

The Team Penske driver opted for an alternative two-stop strategy after starting 16th on the grid, first moving to the primary compound Firestone tire before taking the red sidewall alternate tire for his final 19-lap stint. While the softer tire compound helped him pull out a large lead over Andretti Autosport’s Alex Rossi, who pitted early for alternate Firestone tires to initiate a three-stop strategy, he was forced to save his tire for the latter half of the stint, allowing Rossi to narrow the lead down to two and a half seconds by the time the checkered flag came out on Lap 70.

“I drove it as straight as I could,” Power said of his tire-saving strategy. “I never put any slip (angle) into it. I was just driving it really straight and really nice on the brakes and the throttle. I knew if I could keep a reasonable gap until the end, we’d be OK.”

Power said the win was comeuppance for last year’s Detroit Grand Prix, which he was leading before a red flag forced cars into the pits, and his car would not restart due to the hot electronics.

“Very enjoyable race because you had to chop through the field and fight hard,” Power said. “It’s just redemption from last year. I was just waiting for something to happen those last 10 laps, but I just stayed laser focused.” 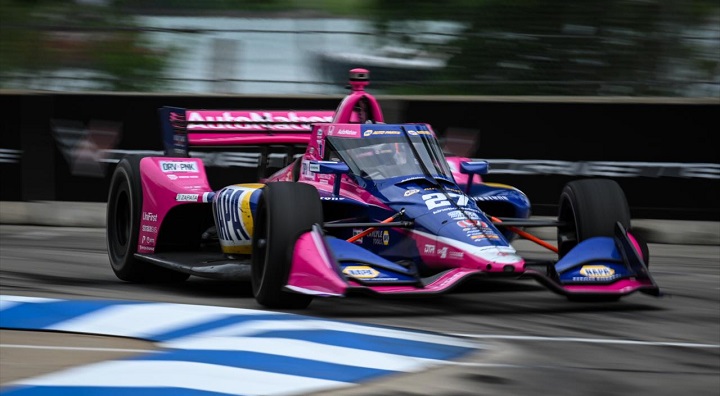 Chip Ganassi Racing’s Scott Dixon followed Rossi across the finish line to round out the podium, while two Chevy drivers, Team Penske’s Josef Newgarden and McLaren Arrow SP’s Pato O’Ward, rounded out the top five. Newgarden, for his part, started from pole position, but was unable to claw his way through traffic after he lost track position over a strategy call.

Power’s efforts put Chevy in victory lane in what will be the last IndyCar race held on the 2.35-mile Belle Isle Grand Prix circuit. Next year’s Detroit Grand Prix will move to a new 10-turn circuit constructed in the city’s core that will encircle the GM Renaissance Center.

IndyCar is back on track this weekend for the Sonsio Grand Prix at Road America presented by AMR, which will begin on Sunday, June 11th at 12:30 p.m. EST.